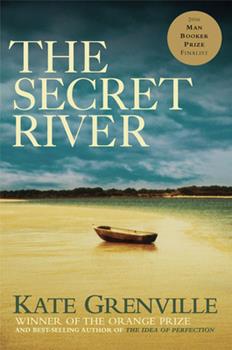 (Book #1 in the Thornhill Family Series)

In 1806 William Thornhill, an illiterate English bargeman and a man of quick temper but deep compassion, steals a load of wood and, as a part of his lenient sentence, is deported, along with his beloved wife, Sal, to the New South Wales colony in what would become Australia. The Secret River is the tale of William and Sal's deep love for their small, exotic corner of the new world, and William's gradual realization that if he wants to make a home...

Published by Thriftbooks.com User , 13 years ago
I loved this book. Just the act of reading this book itself gave me so much pleasure- I would sometimes just go back over the same words and marvel at how well they fit together, how genius Grenville must be to write descriptive passages just so, in a way that created such vivid images. The Secret River is above all about the ache, the passion, people feel for a place they call home. The desire a man feels to make something of himself, become bigger than he is, to make his mark on the world. And the inevitable conflict that comes with the culture clash. It's hard, when approaching a book about historical racial conflict, to hit the right tone. Sometimes, the "historically accurate" tone of racism is so blatant and painful that it physically makes me ill. Sometimes, authors tiptoe around the issue so much that there isn't much impact made. I think that Grenville hits the tone perfectly. Sometimes, just sometimes, even racist people feel guilty about their acts of violence and hate. William Thornhill is one of those people- who turns, slowly but steadily, from one person into another, and doesn't realize it until it's too late and the damage is done. Kate Grenville presents him in an imperfect light, but a sympathetic one. He is a complex and fascinating character, and while there were many times in the book that I did not like him, I could not help but respect his tenacity, and I always, always looked for a reason to cheer for him. This book is beautifully written, tackles a huge subject with an artist's touch, and leaves its mark. Highly, highly recommended.

Published by Thriftbooks.com User , 13 years ago
Set in Australia in the early years of the nineteenth century, Kate Grenville's captivating novel, "The Secret River," tells the story of William Thornhill, an illiterate Thames River bargeman who is transported as a convict to New South Wales in 1806. "Assigned" to his wife, who in effect becomes his master, Thornhill works hard to support his growing family and, like many of the convicts, is pardoned within a few years and settles on the banks of the Hawkesbury River to ply his trade as owner of a small "lighter" carrying goods and produce, trading with other settlers, and developing a piece of prime riverfront acreage. In spite of his wife's longing to return to England one day, their fortunes increase and they come to love their strange corner of the world, but they are troubled by the haunting presence of the original occupants of the land, the Darug people, "the blacks." Some of Thornhill's neighbors, like Smasher Sullivan or Sagitty Birtles, regard the Darug as savages to be driven off, while others find ways to co-exist with them. When the hostility between the Darug and the settlers escalates and a group of settlers decides to put a violent end to the problem, Thornhill must make a choice that will haunt him for the rest of his life. Based on her own ancestor's experiences, Grenville's descriptions of the territory and the frontier life immerse the reader in the day-to-day struggles of the characters until the reader feels that he too is enduring the hardships and wrestling with the compelling choices that William Thornhill and his family experience in that faraway place so long ago.

A gripping novel that draws you in

Published by Thriftbooks.com User , 14 years ago
I loved this book. I read it very quickly because it was so hard to put down. Kate Grenville writes beautifully and captures the magic of the Australian landscape. The story is about William Thornhill who is sentenced to life as a convict in Australia in the early 19th century. The first part of the book concerns his life in Georgian England. He is born into abject poverty and although he tries to make an honest go of it, circumstances lead him into crime. He is convicted of theft and his sentence is to be transported to New South Wales for the term of his natural life. His wife and child accompany him. This part of the book is a little slow, but the momentum picks up once they get to Australia, about 75 pages in. In Australia, Thornhill discovers that the new country represents a blank slate where he can re-invent himself and break out of the cycle of poverty and crime that he has come from. He quickly wins his freedom and seizes the opportunity to get his own land and create his own farm, staking a claim to 100 seemingly vacant acres of land. However this brings him directly into contact (and potentially into conflict) with the native Aboriginal people. The book is beautifully written. It really takes you into the world of early colonial Australia and gives you a sense of how difficult a life the early settlers had. The tension builds and builds as it become obvious that some kind of conflict between Thornhill's family and the Aborigines is inevitable. It made me understand the way that good people can be conflicted about what the right thing to do is. Different settlers in the area make different decisions and as you read the book, it you wonder how you would have acted in the same circumstances. But aside from the moral dilemmas, it's just a good story: a man trying to create a new and better life for himself and his family, overcoming many hurdles and setbacks, and gradually realizing that the biggest threat of all is right in front of him.

Confronting and totally draws you in

Published by Thriftbooks.com User , 14 years ago
This is a superb book of the trials and tribulations that the early settlers faced when arriving in the newly "discovered" Australia. I won't revisit the plot and characters, as other reviewers have done this admirably, but will note that the story and the characters are entirely believable, and that the twists and turns that the plot takes could have their origins in a history book of early white settlement in Australia. What makes this book so believable and therefore so confronting, is the dawning realisation of the main character Will that the "blacks" with whom he shares his land are indeed fellow human beings who have claims to the land, and who are inextricably linked with it the way he and his family will never be. However, it is fear for his family, whipped up by other far less sensitive souls along the river, which drives him to the horror that has so blighted early Australian history. White Australians (and I am one of them) have over time found the history of their ancestors' dealings with the first people somewhat confronting and contraversial, and I imagine that this fine book will once again rekindle the debate relating to the occupation of a land that was home to thousands of people who were one with the land and regarded it as their mother. That aside, it is a fine book, well written, with believable characters that the reader comes to care for. It leaves you wondering how people can live with themselves, as Will himself wonders in the last few chapters. It is a different book, apparently inspired by Ms Granville's research into her own family origins, but will resonate with anyone who lives in a country where they and their ancestors were not the original inhabitants.

Published by Thriftbooks.com User , 15 years ago
One of the books I read during my recent holiday was Kate Grenville's brilliant The Secret River. But it was upsetting, too, which is why I've put off commenting. I've a penchant for colonial literature and this is an entry in that category for sure. Yet, what sets it apart from, say, Conrad and others, is its working-class tone. And, it does make brutally clever sense. The British essentially used convicted felons and their families to settle Australia, or, at lest, its rim. It's shock troops weren't soldiers but the transported working class who quite likely were even more tenacious and driven. That's the story Grenville tells in this utterly affecting novel. It's the sort of book that gives the reader pause, makes the reader sit back a bit to question -- what is happening here? This is a revisionist sort of colonialism that sets a new context ... but doesn't change the outcome. But, then, nothing could. Superb novel, excellent reading from stem to stern. The writing is particularly fine, herewith a few bits: "She was inclined to take it personally about the trees, wondering aloud that they did not know enough to be green, the way a tree should be, but a washed-out silvery grey so they always looked half dead. Nor were they a proper shape, oak shape or elm shape, but were tortured formless things, holding out sprays of leaves on the ends of bare spindly branches that gave no more protection from the sun than shifting veils of shadow. Instead of dropping their leaves they cast off their bark so it dangled among the branches like dirty rags. In every direction that the eye travelled from the settlement all it could see were the immense bulges and distances of that grey-green forest. There was something about its tangle that seemed to make the eye blind, searching for pattern and finding none. It was exhausting to look at: different everywhere and yet everywhere the same." ... "For himself he bought a pair of boots, the first he had ever owned. When he put them on he understood why gentry looked different. Partly it was having money in the bank, but it was also your boots telling you how to walk."
Copyright © 2020 Thriftbooks.com Terms of Use | Privacy Policy | Do Not Sell My Personal Information | Accessibility Statement
ThriftBooks® and the ThriftBooks® logo are registered trademarks of Thrift Books Global, LLC