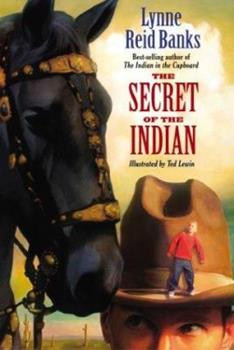 Secret of the Indian, The (Indian in the Cupboard)

(Book #3 in the The Indian in the Cupboard Series)

The adventure deepens . . . In The Return of the Indian, Omri found he could transport himself and his friend Patrick back in history to the dangerous days of his miniature companions. Now, in the secret of the indian, Patrick time-travels back to the rough-and-tumble frontier age of his cowboy friend, Boone. When he returns to the present day, he's accompanied by a disastrous bit of Texas weather that devastates half of England.

The secret of the indian{bookreview}

Published by Thriftbooks.com User , 15 years ago
Did you ever read a book with little action figures brought to life by a magic cupboard? Well if you like books with a lot of action, excitement and danger, a book called The Secret of the Indian is a good book for you. The main idea of this book review is to recommend this book under my opinion. This review is mainly about the end of a book called The Return Of The Indian and the book after that one in the series. It is called The Secret of the Indian. In this story, two main characters, Omri and Patrick, are faced with gangsters who are trying to rob Omri's house. Omri and Patrick chase off the skinheads, but have another problem, how they are going to explain to Omri's burn. A few weeks later, Patrick is trying to tell himself that every thing that happened with the magic cupboard was not real. So after Omri convinces Patrick that ever happened with the magic cupboard was real, both boys steal one of Patrick's cousin's dolls to heal Omri's plastic Indian, Little Bear. After they bring the doll to life and find out the doll's name is Matron, Matron heals Little Bear. Later, Patrick goes back to the time of his toy cowboy, Boone. When he comes back he brings some one back, Ruby Lou. The rest you have to find out yourself by reading the book. In my opinion, the last book in the series, The Secret Of The Indian, is a great book. I totally recommend this book to someone between the ages of 8 and11. It is an excellent book for someone my age. It has great details, described by the author, Lynne Reid Banks, whose books I now love. The series of books are the kind of books where you could lose in until you finish reading the book. I enjoyed reading these books and I hope you do to.

The Secret of the Indian

Published by Thriftbooks.com User , 17 years ago
The Secret of the IndianBy: Lynne Reid BanksReviewed By: P. ShahPeriod 1 Omri and Patrick are forced to reveal their secret to Patrick's cousin. At first, they couldn't trust her one bit, but as things got out of control, they realized they needed Emma. It all starts with Omri sending Patrick to the time of the cowboys. But when Omri brought back the indians and cowboys to life, they were all injured from a war. Omri only had one nurse so he didn't know what to do. There were about 30 injured and half dead indians in Omri's room. that's where Emma came into help. She knew of a plastic figure that was a surgeon that her sister had. By bringing him to life, the indians were helped and headed back to their own time. Meanwhile, Patrick was in the cowboy time and he wasn't having a good time. When he came back, he figured out that he had injured his best friend, a plastic figure of a cowboy. At first the nurse and surgeon thought he was dead but with Omri's strong fingers he stared breathing again. At school Omri read an essay that he wrote about his experience about his magical cupboard. No one thought it was true...except for the principal. The principal said to Omri," They were supposed to make an invention exactly like that and I have a reason to believe that you have that invention." At the end everyone thought the principal was crazy. So, the secret is being kept secret by Omri, Patrick and Emma. I really like this book because there was so much activity going on in the story. And it's so secretive! It just makes you want to read more and more! There is nothing that i disliked about this book. Quotes: Clinging precariously to the bottom rim of the ceiling, Boone shouted a yell of help before he fell. I liked this quote because it showed action and awe. Another quote: " You need to send us back," Boone shouted. " We can't! We lost the key!" Omri replied. This quote is scary because omri can't find the key so the indians are stuck in the future. My favorite part of the book is when Omri and Patrick try to keep Emma from learning their secret. But nothing works out and she finds out. I like this part because it is so suspicious of Emma and it's fun to see what they do.

The book with full of adventure!!!!!

Published by Thriftbooks.com User , 18 years ago
The book I read is called gThe Secret of the Indian.h It is the 3rd series of the Indian story. The first book is calledh The Indian in the Cupboardh and 2nd one is called gThe Return of the Indian,h and it is written by Lynne Reid Banks. I liked the 1st one and 2nd series also, but I liked the 3rd one best!!! It is full of adventure. It is an unbelievable story, because it is about the main character named Omri, his friend Patrick, and the galiveh plastic figures. Of course, this is a fiction book. It is the story when Omri accidentally put his birthday present from Patrick, the plastic Indian into the magic cupboard and he turned the keyc the plastic figure turned into grealh Indian. Of coarse he is small, but he is alive, and he has the feeling, and he came form over 100 years ago. They turned more and more plastic figures alive, and it just was great day. Until, they knew that Patrick has to move. But he doesnft want to. So, they decided to send Patrick to the Boonefs (the Texas cowboy which was Patrickfs plastic figure, but turned into the real tiny person) time. They knew that they could send real people to the plastic figures time, which is more than 100 years ago, because they have tried before. If you send the real person to their time, the person is like a coma. When Patrick went to 100 years ago, every body started to search for him. And the people who knows about the magic cupboard is Omri, Patrick, and Patrickfs cousin, Emma. They think that they never should tell any adults, because if they tell any adults, it will be a problem, and I agree with them. Do you think they can keep the important secret and cause no trouble? I donft think so. But Ifm not going to tell you any more. The thing I thought through out the book is that is has great narrative hook, and if you start to read, you canft stop it. If you feel like boring, this is the book you should read. It will take you to the miracle world. I think this is the greatest strength of this book. I think this is the one of the wonderful author. I didnft find any weakness, but I recommend one thing. If you havenft read the first and second series yet, you should read these first, because you will@find couple of things you wonft understand if you wonft read these books first. I would recommend this book very much, to all the ages, and I especially recommend this to the 4th through 7th or 8th graders, because I know children likes this kind of magical world book than the most of adults. Anyway, thank you very much for reading this, and again, you should read this book, or you will regret!!!

Published by Thriftbooks.com User , 19 years ago
Now, this is the third book called "The Secret of the Indian" & it is about Omri's friend Patrick who goes back in time to the Wild West.Omri & his friend Patrick risk grownups' discovery of their secret when they attempt to help people in the dangerous world of the Old West.Boone is real & he is a toy cowboy but Boone was mostly small & Patrick was big. On the cover of the book it has Boone laying down & Boone is big & Omri's friend Patrick is small & I think in Chapter 7 called "Patrick in Boone-land" Boone grew big & Patrick got small & it must have been texas.The chapter titles I like are called 2. Modest Heroes, 5. Patrick goes back, 6. A New Insider, 7. Patrick in Boone-land, 10. A Rough Ride & chapter 13. Mr. Johnson smells a rat. This chapter called "Mr. Johnson smells a rat" makes me silly & he would say if he smelled the rat "Yuck. Ha, Ha, Ha!? & it is so funny.This book reminds me of a videos called "Spongebob Squarepants: Nautical Nonsence", "Bonanza: The Return" & a Lonestar song called "When Cowboys didn't dance.I enjoy this book when I would be in the wild west!I loved it & enjoyed it!!!!!!!!!!!!!!!!

the whole family loves this series

Published by Thriftbooks.com User , 20 years ago
We checked out The Secret of the Indian on tape from our library and listened to it on a trip. All of us from the adults to the kids (14,8,6) were interested and excited about what would happen next. We have listened to each of the books and are now looking forward to the 5th story.
Copyright © 2020 Thriftbooks.com Terms of Use | Privacy Policy | Do Not Sell My Personal Information | Accessibility Statement
ThriftBooks® and the ThriftBooks® logo are registered trademarks of Thrift Books Global, LLC