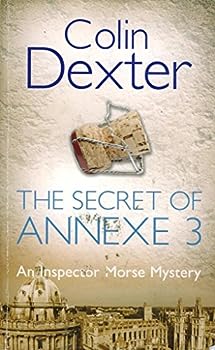 The Secret of Annexe 3 (Inspector Morse, #7)

(Book #7 in the Inspector Morse Series)

This description may be from another edition of this product. Much too early on New Year's Day, a grumpy Inspector Morse is summoned to investigate a murder at the Haworth Hotel. The victim is still wearing the Rastafarian costume that won him first prize at the...

Not my favourite Morse, but still worth reading.

Published by Thriftbooks.com User , 16 years ago
Although this book was not my favourite of the brilliant Inspector Morse series, it is still worth reading. Even Colin Dexter's less than best efforts are a cut above many who write in this genre. This is a puzzle that has Morse and Lewis going off in the wrong direction right up until the end of the book. They have the gist right, but no way of connecting the facts to make them make sense. Who was the person dressed as a Rastafarian at the New Year's Eve fancy dress ball? Who killed who? Was it the jealous husband or was it the lover? For a time Morse and Lewis did not know the exact identity of the corpse found on the bed in Annexe 3. Morse and Lewis are pitted against a very clever killer this time, but they do manage to sort it out. This is really a wonderful British procedural series. The character of Morse is developing into something quite special.

Published by Thriftbooks.com User , 18 years ago
I came across this in a used book store and recognized it immediately for what it was: a Morse mystery that I had never read. As Inspector Morse stories go, this one is good but not exceptional. It is always good to be in the presence of the cranky Inspector, especially since he is so clearly personified by the late, great John Thaw, and this story has some very unique elements in the telling of a good story, but it relies a little too much on coincidence for its final resolution. It was a necessary device in this case, but if Morse hadn't been in that particular pub at that particular time... Oh, well. I think we read these as much for the enjoyment of Morse's cognitive processes and his relationship with Lewis, his long-suffering sergeant. And there are far worse ways to spend and evening! (I don't want this back.)
Copyright © 2020 Thriftbooks.com Terms of Use | Privacy Policy | Do Not Sell My Personal Information | Accessibility Statement
ThriftBooks® and the ThriftBooks® logo are registered trademarks of Thrift Books Global, LLC