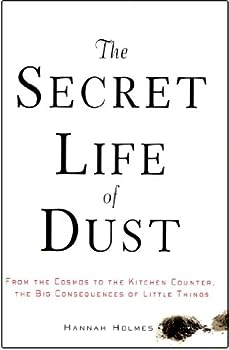 The Secret Life of Dust: From the Cosmos to the Kitchen Counter, the Big Consequences of Little Things

Hannah Holmes A mesmerizing expedition around our dusty world Some see dust as dull and useless stuff. But in the hands of author Hannah Holmes, it becomes a dazzling and mysterious force; Dust, we... This description may be from another edition of this product.

Published by Thriftbooks.com User , 20 years ago
Most things we run across in life - books, movies, art - are simply variations of each other. This book is something truly unique unto itself, breaking new ground and propelling the reader into strange new worlds of thought, from the infinite to the infinitesimal, from the omnipresent to the unnoticeable. You haven't read anything like it.Stretching the mind to conceive things that it has never even occurred to us to consider, it leads us on a strange and wondrous journey through time and space, through events cataclysmic and mundane. Better buy two copies, because friends who stop by will suddenly find themselves "borrowing" it, only to have it "borrowed" away in turn by others. In that way, this book is a bit incendiary in nature as it has a power to ignite the curiosity of anyone who comes into contact with it.Catch the flame.

vivid and fascinating exploration of the tiny world

Published by Thriftbooks.com User , 20 years ago
Hannah Holmes has produced a gem of a science book which reads like a good novel. Her mastery of descriptive prose and imaginative narrations of the exploration and discovery of the microscopic universe we inhabit will draw the reader into the excitement of the scientists who study the very tiny stuff of which everything is made. This story is clearly very thoughtfully researched and woven together from a great range of scientific sources. As Holmes attempts to confront some still uncertain and controversial ideas about the role of dust in our individual health and the global health of our planet, she takes a reasonably balanced approach, leaving the reader with the sense of wonder and curiosity and thirst for greater understanding which must drive the scientists she writes about. I look forward to more such enlightening and entertaining books from this author. I agree with some other reviewers who comment that some illustrations, especially those referenced in the website bibliography at the end of the book, would make the book even more enjoyable. But that does not detract from its five-star standing, in my view. Having the referenced web pages gathered on a central website to make them easier to explore might also be nice, although that, of course, goes beyond the scope of a "hard copy" paper publication. This is the sort of story which could be well adapted to an online, hyperlinked multimedia presentation, using some of these remarkable resources to expand the story and spark further individual exploration, perhaps published on CD-ROM along with the book. Perhaps the publishers would consider such. I think such a product could expand the audience that would enjoy this story, to make it more accessible to the nintendo generation and others who have been brainwashed by the educational system into thinking natural science is boring and impossible to understand. We need more creative and imaginative science writers like Hanna Holmes!

Published by Thriftbooks.com User , 20 years ago
"Everything counts in large amounts." -Depeche Mode Science writer Hannah Holmes uses the Biblical "dust to dust" adage as a thread weaving through her eleven easy to read chapters, beginning with a sort of overview in Chapter 1. We begin as stardust, and it is to stardust we shall return. Eventually. In Chapter 2, "Life and Death among the Stars," she introduces cosmic dust and in Chapter 3 shows it falling on the earth from outer space: forty thousand tons of it every year, almost all of it in a fine rain. (p. 33) Then there are three chapters on how dust moves around on our planet and how it affects the weather, the life cycles of plants and animals, our economies and our health. There is an excursion into the past in Chapter 7 to answer the question, "Did Dust Do in the Ice Age?" Chapter 8 is about the continuous fall of atmospheric dust onto land, ocean and ice. It is finally in Chapter 9 that Holmes considers the dust in our neighborhoods, and then in Chapter 10, "Microscopic Monsters and Other Indoor Devils," she gets to the topic of primary interest to most readers, the dust under the bed, in the rug, and on the floor. The final chapter is about the dust of our bodies after we are dead, and then after the sun explodes and we are once again stardust. This is a fascinating read that unlike most books becomes more interesting the further into it one gets. It may change the way you view the world. Seeing our planet and its history from the point of view of dust sheds an entirely different light on things. The very small things in enormous numbers affect our lives in ways that surprise and astound. Consider the sheer volume and weight of dust that swirls around in the atmosphere, with massive tons of it held aloft to cross oceans and continents. That story alone is mind boggling. Here I learned that the coral islands of the Caribbean developed their soil not from the breakdown of the islands themselves, but from the sand that fell on them over millions of years from the Sahara Desert thousands of miles away! This, the relatively unknown story of dust is a story of dust hunters who collect and analyze the minute particles from all over the planet to determine their origin and how they affect the various environments. Dust hunters even drill into the arctic and the antarctic to reconstruct the story of dust laid down in the past. They can tell by the composition of dust where it came from. Saharan dust, for example, is particularly heavy in iron and phosphorous. In fact, the microbes in dust, the viruses, the fungi and the bacteria, can betray its origin. Holmes considers some hot topics in science along the way, including global warming and the explosion in asthma in the United States and Europe in recent decades and how dust may or may not be the cause. Deadly dusts containing asbestos, quartz, coal, etc. are considered as well as the danger of working with materials containing them. Why talcum powder is no longer duste

Published by Thriftbooks.com User , 20 years ago
Who ever thought dust could be so fascinating? This book is gripping. It made me think twice about basic activities, like eating and even breathing. Filled with interesting historical and scientific facts, this book presents both the positive and negative effects of dust. One thing is for sure - you'll never underestimate the power of small things again!

All Sorts of Dust, and Far From Dry

Published by Thriftbooks.com User , 21 years ago
As dull as dust, you might think, until you read a fascinating and wide-ranging science account, _The Secret Life of Dust: From the Cosmos to the Kitchen Counter, the Big Consequences of Little Things_ ((John Wiley & Sons) by Hannah Holmes, and realize that dust is certainly universal, and is often a nuisance, but it is also a basic cosmic building block. It is hard to imagine any facet of dust that Holmes has not covered in remarkable detail. House dust is here, of course. Everyone carries around a personal cloud of dust, made of skin cells and clothes fibers, but mostly composed of unknowns. Some of this turns into house dust, which has a surprising complex ecology of fungi and dust mites which feed upon it, and tiny, fierce pseudoscorpions that feed upon the mites. But thinking of dust as some domestic phenomenon is a bit parochial. Try thinking cosmic. Holmes goes back to the Big Bang, which scattered matter all over, in unimaginably thin concentrations. The dust grains gathered, and formed places for atoms to meet and make molecules. That made the sun, the earth, and of course, us. Space dust is therefore of increasing interest to cosmologists, the target now of various probes that are supposed to gather the dust out there and bring it home uncontaminated. It has become alarmingly clear that dust pays little attention to national boundaries. Oriental countries have had booming technologies run mostly on coal for electricity and diesel for transport. In China, one out of fourteen deaths is due to noxious dusts, and its crops are flagging because they don?t get as much sun as they used to. It is only recently that we have discovered that the problem dusts of Asia are our problem, too. The Asian Express makes regular deliveries of Gobi Desert and industrial dusts to the American northeast. The Sahara desert sends its dusts to the eastern US about three times a summer, maybe with bacteria. And the US dusts go to other countries, and it is all one big swaparound. There are rivers of dust in the air, rivers that have flowed since long before we knew of any such things. They are now bigger because of drought and land abuse, and now they carry a freight of DDT, PCBs, and other pollutants that we magnanimously thought we were only dumping onto our own national soils. We at least know now that if we are going to protect countries from poisonous dusts, we are going to have to have a global program to do so, but whether that knowledge will actually inspire such a program is not at all clear.In an amusing last chapter, Holmes emphasizes that to dust we shall return. She summarizes the efforts of the arts of the embalmer and casketmaker only to show that dust is our destiny no matter what. Some of us will rush the job, being burned into ash quickly after death. It is all well and good for family members to scatter that dust in a garden or at sea, but not too terribly imaginative. For a fee, various companies will turn that dust i
Trustpilot
Copyright © 2022 Thriftbooks.com Terms of Use | Privacy Policy | Do Not Sell or Share My Personal Information | Accessibility Statement
ThriftBooks® and the ThriftBooks® logo are registered trademarks of Thrift Books Global, LLC