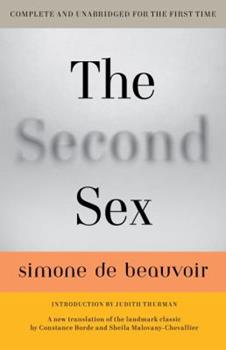 The essential masterwork that has provoked and inspired generations of men and women. "From Eve's apple to Virginia Woolf's room of her own, Beauvoir's treatise remains an essential rallying point, urging self-sufficiency and offering the fruit of knowledge." --Vogue This unabridged edition reinstates significant portions of the original French text that were cut in the first English translation. Vital and groundbreaking, Beauvoir's pioneering and...

It was a little hard or me to read. I read a lot, but honestly I didn't get very hard.

Published by Fay Jones Day , 3 months ago
The book came fast and in perfect condition. I think this book was written more for academics, not everyday people. For me, it was a hard read. It was translated from French and that might have been the problem.

Published by Thriftbooks.com User , 17 years ago
I am staggered that the two "Spotlight Reviews" of this book revolve around the book being "dated." Maybe it's just where I'm from. Maybe things are radically different elsewhere in the country and the world, but most of Beauvoir's words still ring true, perhaps not to the same degree as it was in the 1950s and 1960s, but true nonetheless. We, as a society, have progressed, but perhaps not so far as some would have us believe. With all due respect to those who think differently, I must disagree. Beauvoir's book may be dated, but it is far from "impenetrable" (interesting choice of term, isn't it?) and is still applicable to the state of women as a gender today.

It did what was necessary to my head

Published by Thriftbooks.com User , 18 years ago
I, a young white man, read Second Sex last week. Although it contained almost nothing that I had not read before, it did what was necessary to my head. It somehow made the position of woman as the Other imaginable by me. Reading it, I imagined what it would be like for me to live in a society that had been dominated by women for more than three thousand years, a society where almost all the most renowned people, heroes, and religious icons were women. A society where the United States of America had had nothing but women presidents and every state was predominantly represented by women, though males account for half the population. Where the predominant forms of music for the last fifty years have all treated men as an interesting and occasionally useful, but often annoying or even maddening objects, and us men run around in skimpy calvin klein-style underwear on MTV while hip-hop women constantly call us "dogs" in their raps and the classic rock section of the local used music store overflows with female lyrics that question what is more important in life, men, cars, or booze? and blame us men for breaking their poor girl hearts and for being warlocks, (...), or idiots (while the woman rock stars collect millions of dollars and boy groupies run around ready to have sex with any security guard to get a shot to have sex with the famous women). A society where families are dominated by mothers and their husbands live in fear of having their allowance terminated, and have to do menial chores around the house to try to feel, or at least look, useful. Where a boy child realizes before he is 10 that he is a failure and, at best, a second-rate human being (if not an object)(...) A society that is obsessed by the symbol of the womb--in which musical instruments, spaceships, means of transportation, weapons, religious ornaments, political regalia, and thousands of other things are designed to resemble the shape of a womb. A society in which men are scared, brutally scared, of walking around alone at night because almost any woman can physically overpower them and rape them with a sex toy. In which the most famous and influential philosophers of all time, the ones that get taught in university classes and whose books are actually bought and read and that influence the intelligensia, are all women, mostly women who loathe and/or misunderstand men and write things such as "What is the cure for all of a man's problems? Impregnating a woman" but despite such stupidities are adored by female thinkers. And so on... So that's why I rated this 5 stars. It did something to me, which is the most important quality in a book for someone who's read thousands.

A must for any philosopher and feminist

Published by Thriftbooks.com User , 22 years ago
Simone De Beauvoir's book is the starting-point for any study of feminist theory. As part of the existentialist school of thought, the book explores why woman is the Other in society. While a few sections of this book are horribly dated (e.g. Part II - History), De Beauvoir's mamoth work initiates almost every debate waged within feminist thought up to the present day. She tackles burning debates concerning woman's biology, motherhood, prostitution and more. She also is the first to discuss the many myths surrounding women which doom them to immanence - the object through whom the subject (man) fulfills himself.
Trustpilot
Copyright © 2022 Thriftbooks.com Terms of Use | Privacy Policy | Do Not Sell or Share My Personal Information | Accessibility Statement
ThriftBooks® and the ThriftBooks® logo are registered trademarks of Thrift Books Global, LLC