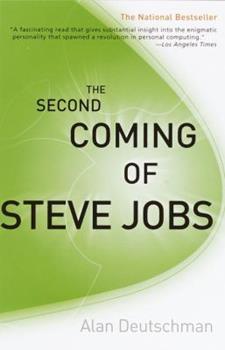 The Second Coming of Steve Jobs

From the acclaimed Vanity Fair and GQ journalist-an unprecedented, in-depth portrait of the man whose return to Apple precipitated one of the biggest turnarounds in business history. With a new epilogue on Apple's future survival in today's roller-coaster economy, here is the revealing biography that blew away the critics and stirred controversy within industry and media circles around the country.

Published by Thriftbooks.com User , 19 years ago
Steve Jobs is a powerful man with a tight grip on his image. The fact that this book was even written is a testament to Deutschman's dedication. I heard that Jobs even leaned on the press to avoid publicizing the book. After the reading the book, I don't even know why he was pushing so hard. Yes, there's some dirt about his love life, but most of the story is generally good news about a hard working guy with a knack for finding great designs. The chapters about Pixar are a great addition to the history of that company and an important reminder that Jobs helped build two world-class companies. I read it with pleasure.

Better than I ever expected!

Published by Thriftbooks.com User , 20 years ago
I am unabashedly one of the (until recently) Macintosh Faithful, having at one time printed my own business cards with "Mac Evangilist" as my title. I would approach customers in the Macitosh section of CompUSA or Computer City and see if they had questions (only while i was there already, mind you!). I have waxed lovingly on the virtues of Macintosh to all my friends and family, and longed for a NextStation, if only as a hobby machine.Needless to say, I am a died-in-the-wool Steve Jobs fan. In all fairness, the amount of information out there about the MAN is thin and disreputiable. His charm, 'reality distortion field' and his public dressing-down of employees are the stuff of legend, but little concrete has been found about the MAN.A few years ago I read another biography, called (i think) "Steve Jobs and the NeXT Best Thing". It was a one-sided, blistering account of every failure Jobs made with his founding of Next, and seemingly NO good choices were made.Picking up this book, The Second Coming, I was expecting more of the same. What I found was a fair, inciteful, and only slightly more vague than it could have been. The writer does seem to set the reader up as to many of Steve's strong points, and then makes a point to tear down Steve and portray him as almost an unfeeling monster. The narrative is a gentle roller-coaster ride between these two extremes, giving the impression that Steve is either a child, or possibly suffering from multiple personality disorder.One thing to note is that Steve Jobs does not approve of this book, and as I understand sued to stop publication. Needless to say, HIS point of view and interviews with him are not part of the makeup of the book.Overall, I find this to be an excellent, information packed book on one of the FEW businessmen I would consider a 'hero' to me. However, without Steve's direct input, this book comes across VERY strongly as a coloring-book picture colored from the OUTSIDE up to the outline of the man, not filling in the man himself.

Published by Thriftbooks.com User , 21 years ago
This book is a very compelling read--fast-paced and full of colorful and revealing anecdotes. It portrays Steve Jobs as a fascinatingly complex figure, someone who is highly intelligent, creative, passionate, and inspiring but whose rage for perfection leads him to verbally abuse and humiliate his colleagues and friends and to act in self-destructive ways. I thought the writer did a good job of showing the complex facets of this extraordinary personality. The book seems fair and well reported. I've been put off by other authors who have been blindly worshipful of Silicon Valley moguls ("eBoys" and "New New Thing" come to mind) so it's refreshing that this book gives a more realistic look at what really happens at high-tech companies. I was especially interested by the eye-opening look behind the scenes at the Pixar movie studio, where the author reveals that Jobs lost a power struggle with John Lasseter for creative control. And the sections about Jobs's return to Apple have some fascinating close-up details, like the scene of Jobs crying when he first viewed the "Think Different" ads or the time when Jobs spied on the private e-mail of a mid-level employee. Overall, a very enjoyable read.

A Brilliant Man and His Story

Published by Thriftbooks.com User , 21 years ago
Steve Jobs co-founded one of the largest computer companies in the world and has survived verbal attacks, hero worship, skepticism, triumph, failure, a less than pleasant parting from his company and a courageous return to it. This is the life of Steve Jobs and this book does a wonderful job of chronicling it. Love him, hate him or be somewhere in between, Jobs is a fascinating man who has led, and continues to lead a turbulent and spectacular life. Through the numerous interviews the author has presented to us how Jobs' peers view him. This is a rare glimpse into the private life of one of America's best known executives, a man who, some say, began a technology revolution.This book might increase or decrease your respect for Steve Jobs, but no matter what, it is sure to entertain.

The truth about Steve Jobs

Published by Thriftbooks.com User , 21 years ago
"The Second Coming of Steve Jobs" is that most unusual thing -- a business biography that you can't put down. It's a potboiler -- but a fair and accurate one. The book examines Jobs' famed charisma, his egomania, his perfectionism, and drive to succeed. Also his assorted relationships with various women and tastes in furniture. Full disclosure: I'm a reporter who's interviewed Jobs a couple of times, and I'm in the book. I can tell you that those portions are both extremely flattering and 100 percent accurate.
Trustpilot
Copyright © 2022 Thriftbooks.com Terms of Use | Privacy Policy | Do Not Sell or Share My Personal Information | Accessibility Statement
ThriftBooks® and the ThriftBooks® logo are registered trademarks of Thrift Books Global, LLC