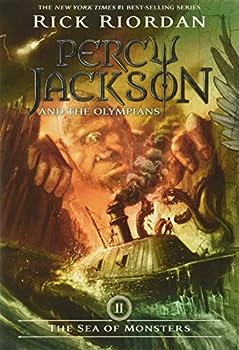 The Sea of Monsters (Percy Jackson and the Olympians, Book 2)

by Rick Riordan and Rik Riordan

Percy Jackson and his friends undertake a perilous voyage to save their summer camp in this modern-day adventure with a Greek mythology twist.* "In a feat worthy of his heroic subjects, Riordan crafts... This description may be from another edition of this product.

Published by Khalessi , 1 year ago
This is such a fun series to read! I really wish the movies had done these books justice. Clarisse is supposed to unlikable but I really like her. She annoys me a little to an extent but she's so bad ass. Love Annabeth and Grover! They are awesome.

Published by Tuffins , 3 years ago
My husband told me he loved this book, so I ordered it for him. I ended up reading it and didn't want to put it down. Right before I finished, I ordered the next book.

Published by Thriftbooks.com User , 14 years ago
Although Rick Riordan's young fans don't know it, they're getting something of a classical education while they're reading his Percy Jackson and the Olympians series. The stories are set in today's world, with side trips into pure fantasy, but they're told in a simple, down-to-earth way that has won Riordan readers throughout the world. Greek gods walk through the pages of Riordan's novels for juvenile readers, and they bring with them all the old stories from Greek mythology. I read the first volume of the projected five-book series to my nine year old and we had a blast with it. He was amazed at how I always knew the stories behind the stories and knew so much about the gods themselves. I explained to him that I read a lot of Greek mythology when I was in third grade. Since getting his interest piqued, he had me buy him a compendium of Greek myths and has been reading constantly. His knowledge has surpassed mine at this point. That's the power of Riordan's storytelling. Percy Jackson is a great hero for the series. He's an average kid for the most part - ADHD, video game junkie, pop culture freak - except that he has extra problems: he never gets to stay in the same school because some weird thing happens, he gets blamed for it, and then he's expelled. The weird thing that happens is usually some god or monster tries to kill him. Thanks to the Mist, the mystical spell that keeps mere mortals from seeing the gods or their creatures, everyone believes Percy did something. In the first book, THE LIGHTNING THIEF, Percy finds out he's the son of Poseidon, the god of the seas. He also finds out he has a lot of cool powers while in the water - like being able to breathe underwater and swim superfast. Percy's character, and his pals Annabeth and Grover, are true highlights of the series. I also enjoy the adults as well, Percy's mom, Chiron, the centaur mentor, and Mr. Dionysius, the camp director. Every summer, Percy goes to Camp Half-Blood, where the half-gods go hang out to learn how to fight and be champions, and where they learn their powers and go on quests. I also like how Riordan is incorporating his own world-building into the myths of the Greek gods. He borrows a lot from the original mythology, but he changes it and warps it to fit the modern world as well. That's important because his young readers get to see how dysfunctional the Greek gods were and how their problems might apply to their own families. That's just one of the lessons that become apparent throughout the books. THE SEA OF MONSTERS starts out with Percy getting in trouble at school again. He's become friends with a new kid, Tyson, that no one likes, and he's become a target for school bullies that turn out to be monsters in disguise. Their grudge dodgeball match literally destroys the school and it isn't long before it's just a memory and a burning ruin. And the battle will leave most readers laughing their heads off, even though they might be worried

Published by Thriftbooks.com User , 16 years ago
Rick Riordan comes through again, and this follow up to The Lightning Thief is just as entertaining, informative and action-packed as the first book. This time Percy (son of Poseidon) is at school in New York when things start to go downhill fast, beginning with some bad dreams about his friend Grover the satyr, followed by an attack by cannibalistic dodge ball players. When Annabeth (daughter of Athena) arrives on the scene with more bad news, Percy has to embark on another quest, this time unsanctioned, to save Camp Half-Blood, which is vulnerable to attack since its defenses have been breached. He also has to save Grover, who's found himself in an inter-species entanglement in which he doesn't quite see eyes to eye with his suitor. Accompanying them is Percy's class mate Tyson, a street kid who counts Percy as his only friend, but who is much, much more than he seems. The three travel to the treacherous Sea of Monsters in the face of insurmountable odds to capture the Golden Fleece, which hopefully can counteract the poison and restore the magical protection of the Camp. Steeped in Greek mythology, yet written for young readers, this one is highly recommended for developing the imagination with its combination of thrilling adventure and legend. Amanda Richards, June 25, 2006

Published by Thriftbooks.com User , 16 years ago
"Sea of Monsters" is a sequel to Riordan's "Lightning Thief." Percy Jackson (you may or may not know from Lightning Thief) is the son of the Greek God Poseidon and a modern American woman, living in 21st-century New York. In Book Two, he returns to Camp Half-Blood (a secret camp for the children of gods and mortals, most of whom have secret powers), to learn that the Camp's protective veil has been broken by monsters and evil beings bent on destroying the half-blood kids. To save the camp, he and his friends the wise and brave Annabelle (daughter of Athena), Grover (his nerdly centaur sidekick), and a new character Tyson (who turns out to be a cyclops in need of a haircut), must seek out the Golden Fleece. Which turns out to be in....Florida, I believe! This summary illustrates the way in which Riordan ramps up two aspects of the earlier book: its humor, and its superficial similarities to the Harry Potter books. Riordan has a real sense of humor and an ear for witty kid-like dialogue (I loved the bits where Grover is captured by a larger Cyclops and talks his way out of marrying the big brute). A Voldemort-like character also takes shape in this 2nd volume - but he has not the physical strength to come back in full form yet, and will require the treachery of some of the half-bloods (presumably continued in future volumes) to come back to full power. As in the first volume, readers will uncover a lot of entertaining bits of Greek mythology, embedded in the book like nuts in a brownie. Another delicious volume.
Trustpilot
Copyright © 2022 Thriftbooks.com Terms of Use | Privacy Policy | Do Not Sell or Share My Personal Information | Accessibility Statement
ThriftBooks® and the ThriftBooks® logo are registered trademarks of Thrift Books Global, LLC