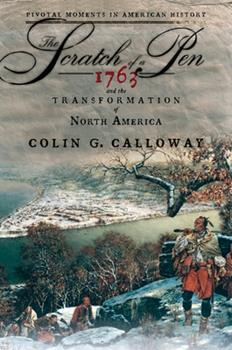 The Scratch of a Pen: 1763 and the Transformation of North America

In this superb volume in Oxford's acclaimed Pivotal Moments series, Colin Calloway reveals how the Treaty of Paris of 1763 had a profound effect on American history, setting in motion a cascade of unexpected consequences, as Indians and Europeans, settlers and frontiersmen, all struggled to adapt to new boundaries, new alignments, and new relationships. Britain now possessed a vast American empire stretching from Canada to the Florida Keys, yet the...

America's First War Before it Became America as We Know It

Published by Thriftbooks.com User , 12 years ago
You will never know or understand the American Revolution until you visit the period prior, namely, The French and Indian War( 1754-1763 ). The battlegrounds of this war changed the face of North America and tested the mettle of many future Independence heroes. Calloway, in this rather brief narrative, provides an excellent backdrop through his exhaustive research, as evidenced by his numerous notes. The scenes leading up to the signing of the Treay of Paris in 1763 are vivid and riveting. this is a must read for all who relish this span of our early history.

DIFFICULT BOOK TO PUT DOWN

Published by Thriftbooks.com User , 13 years ago
This is a story of the classic statement 'win the war but lose the peace'. The Treaty of 1763 got France out of North America as a nation, but it did little for the people of French decent who had lived here for generations, plus most Indian tribes had played the big three-Spain, France, Britain-off for the benefit of presents and gifts it could gain them, with France now gone they were uncertain how to interact. Plus when it came to managing trapping and Indian affairs the French were and continued to be much better at it than the English. In fact with the treaty the British found themselves being snubbed by many tribes. Many of the tribes, most explicitly shown by Pontiac's war, were not happy with British take over or the French exit. Further most tribes felt they had not been defeated by the British therefore they were not conquered, and failed to have any understanding how Britain could control land the Indians felt they owned. And in the case of Quebec English law could never govern the French Canadians as well as French law. The English opened a hornet's nest of upheaval just at the time they were bankrupt from the 7 year's war and at a time they thought they had achieved peace. Ultimately much of 1763 gave birth later to our Revolutionary War, as illustrated by the bad feelings this treaty caused with men such as the Lees and George Washington of Virginia, who by being closed out from buying and opening Indian lands felt the British were hitting them in the pocket book and encroaching on their deserved profits. Plus England now felt since the war had been fought over these lands, with benefit going to the the colonists , those same colonists should now kick in to help pay for the war. It seems the Treaty of 1763 satisfied almost no one except those in power across the sea in Britain. An excellent book with revelations on almost every page. Well worth a few night's reading. Semper Fi.

Published by Thriftbooks.com User , 16 years ago
Perhaps the long shadow of Francis Parkman has discouraged historians from writing about the French and Indian War (Seven Year's War). Whatever the reason it's good to see from the publication of several books that Americans are taking a renewed interest in the pre-revolutionary period when the British were triumphant and the Indians still counted as a political force. It's past time for a thorough revision of Parkman -- who was ungenerous with the Indians although I thrilled as a young reader to his descriptions of their ferocity -- for example, the "insensate fury" of the Iroquois. Actually, the Iroquois were less insensate than they were astute. Calloway omits the bloody details and vivid writing of Parkman but he gives us a thorough picture of what happened in the wake of the English victory over the French in North America. In particular he focuses on the frontier and the built-in conflict of American settlers, British policy, and the Indian tribes who either went down to defeat with the French or were betrayed by perfidious Albion. They made their point, however, in Pontiac's War and by clearing white settlers from the frontier. But their numbers were declining and they would soon be overwhelmed. This is a good book about the issues of the frontier between Whites and Indians. In addition, there's a good account of the French movement from Canada to Louisiana and the Spanish rule in Florida and the trans-Mississippi. Smallchief

Published by Thriftbooks.com User , 16 years ago
Meticulously documented, supported by great quotes from the players, Calloway's book may be a tad dry, but it is long on data, insight and perspective. Great, short read and I would say a highly recommended read for anyone interested in Colonial America and our history in general. Indian perspective is worth getting the book alone, to my mind. As this was my first book on the subject, I was gratified that it was concise and detailed so as to lead me into other areas I might wish to explosre in further reading. Mean Bob Mean [..]

Published by Thriftbooks.com User , 16 years ago
As with all books in the "Pivotal Moments in American History" series, this book is exceedingly well written. David Hackett Fischer [Washington's Crossing] has superbly edited this work and his 3 page editor's note is itself, worth the price of the book. Dartmouth Professor of History, Colin Calloway has closely examined 1763, one of the most critical years in American History in his book, THE SCRATCH OF A PEN: 1763 AND THE TRANSFORMATION OF NORTH AMERICA. This one is sure to take its place on the "essential reading" list of American history lovers. The book derives its name from historian Francis Parkman, who wrote regarding the 1763 Treaty of Paris at the conclusion of the Seven Years War, "half a continent changed hands at the scratch of a pen". What is commonly referred to in America as the French and Indian War was in actuality, the first World War. It was fought on 4 continents and 3 oceans around the globe. Its' participants included not only the British and French, but Americans, Canadians, American Indians, Prussians, Austrians, Russians, Spaniards and East Indians as well. Nearly a decade of war left both Britain and France in economic ruin. Britain, being victorious, tried to extricate itself from financial crisis by attempting to simultaneously cut costs (reducing gifts the Indians had grown so accustomed to receiving from the French) and increasing its revenue by raising taxes (on the colonials), which NEVER works. Cutting costs led in part to sparking an Indian war, and raising taxes led to an all out revolt by the colonies. Ultimately, Britain would be unable to benefit from its' newly won empire. Calloway shows in explicit detail how the 1763 Peace of Paris Treaty had a much more tumultuous effect upon the peoples of North America than the war itself. Britain tried to divide its newfound empire into two pieces, one for its colonists and one for the Indian tribes. The colonists, however, had a much different view. They saw their hard fought victory in the war as giving them the right to expand into the newly conquered territory, to itself relieve some its financial burden through land speculation and settlement. In an attempt to quell the growing anarchy in the new territory, Britain engaged in perhaps one of the first instances of bio-terrorism by purposely infecting Indians with small pox. Though successful in "thinning the herd" so to speak, British lack of government intervention and control in the territory spurred anarchy among both the Indians and the settlers. Calloway has brilliantly defined both the short and long-term effects the Peace of Paris had on every venue of North America, from Hudson Bay to Florida and Cuba, and Nova Scotia to the Louisiana Territory. For a much better understanding of American history and the causes that pushed the colonies towards independence, this is essential reading. Professor Calloway holds the reader in his grasp with every page. The text flows nicely and is capped off with an exh
Trustpilot
Copyright © 2022 Thriftbooks.com Terms of Use | Privacy Policy | Do Not Sell or Share My Personal Information | Accessibility Statement
ThriftBooks® and the ThriftBooks® logo are registered trademarks of Thrift Books Global, LLC