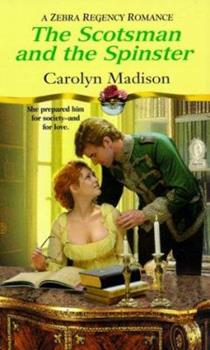 The Scotsman and the Spinster (Zebra Regency Romance)

by Joan Overfield and Carolyn Madison

Adalaide has transformed many an awkward man into an elegant gentleman. But her most challenging pupil yet is a headstrong soldier named Ross MacCailan, home from the war to campaign for funds in the House of Lord. Teacher and student are about to discover that the maneuvers of the heart are as intricate as etiquette and as dangerous as any battle.

An army sergeant inherits a title and a "governess."

Published by Thriftbooks.com User , 21 years ago
Ross MacCailan wants nothing to do with the title and estates inherited from his uncle, with whom he had quarreled bitterly 15 years ago before joining the army as a common foot soldier. However, it turns out that he must accept the title and use his influence to help Wellington defeat his political enemies back home in England.That is bad enough, certainly, but he is outraged when he is assigned a "governess" to help him with the social graces.Adalaide Terrington has accepted her spinster status and has taken on the responsibility of tutoring young men in need of assistance in the area of etiquette and manners. The army-sergeant-turned-viscount is no young stripling to be easily molded, however, and Adalaide finds herself in the position of wanting more than respect from her headstrong pupil.A truly excellent Regency by one of my favorite authors; however, I have a bone to pick with publishers who try to fool us by imposing pseudonyms on their authors. Those of us who are diehard Regency fans and who buy just about every one available are NOT IMPRESSED by such tactics, merely annoyed that our intelligence and loyalty are so underestimated.

Published by Thriftbooks.com User , 21 years ago
This is a cut above the normal Regency Romance, but a cut below Overfield's other work. The doughty hero and feisty heroine are attractively drawn, their situation is conventional but leavened with touches of contemporary politics, the romance believable, but... there is a sense that she's left a lot out. As usual her side characters are as interesting as the hero (and in the case of Lord Falconer more), and you're left wondering eagerly if they'll appear in any future novels. I have always enjoyed her writing, so I'll buy "Carolyn Madison"; but I'll be looking forward to the next Overfield book.
Copyright © 2022 Thriftbooks.com Terms of Use | Privacy Policy | Do Not Sell My Personal Information | Accessibility Statement
ThriftBooks® and the ThriftBooks® logo are registered trademarks of Thrift Books Global, LLC