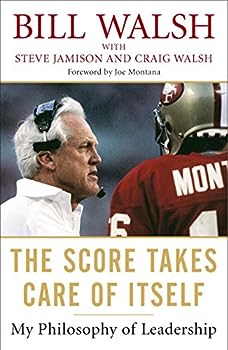 The Score Takes Care of Itself: My Philosophy of Leadership

The last lecture on leadership by the NFL's greatest coach- Bill Walsh Bill Walsh is a towering figure in the history of the NFL. His advanced leadership transformed the San Francisco 49ers from the... This description may be from another edition of this product.

Published by Thriftbooks.com User , 13 years ago
I was asked by my son to get this for him for Christmas. The order was placed right before Christmas, but got it on wednesday before Christmas. He was very pleased with the book and has already read it and told me it was exactly what he was looking for. The book was used, but was in fantastic condition.

Published by Thriftbooks.com User , 13 years ago
Are you ready for some football? The late Bill Walsh, who led the San Francisco 49ers to three Super Bowl championships in ten years, has written what is more of a leadership book than a football memoir. Written in part with the help his son Craig, The Score Takes Care of Itself: My Philosophy of Leadership is Walsh's coda - a "last lecture," if you will - to a groundbreaking career in leading not only his players, but the men and women of the franchise in his added role as general manager. One does not need to know or appreciate professional football to understand, learn, and benefit from Walsh's best practices. Walsh divides the book in five parts consisting of his bedrock Standard of Performance; innovation, planning and common sense; fundamentals of leadership; essentials of a winning team, and his sometimes painful lessons learned. Climbing the ladder of football success from high school coach to college and finally apprenticing under the legendary Paul Brown of the Cincinnati Bengals, Walsh was named coach and general manager of the lowly San Francisco 49ers in 1979. Implementing his Standard of Performance throughout the franchise was his first order of business, "teaching each person in the organization what to do and how to think." The Standard ("some picky, some profound") included core values, work ethic, commitment to learning and teaching, the direct connection between details and improvement, self-control, loyalty and team welfare over self, among many others. All 49er employees possessed figurative ownership in the organization. They became, by every measurement, the team of the 1980s. Walsh, the student of great teachers like Brown, himself begat five assistant coaches who would later become head coaches in the National Football League. Walsh was not presumptuous enough to write a book that would guarantee good leadership; rather, he sought to help us understand the ways we can increase the probability of success: "That's what it all comes down to, namely, intelligently and relentlessly seeking solutions that will increase your chance of prevailing in a competitive environment. When you do that, the score will take care of itself." I found The Score Takes Care of Itself to be one of the best books on leadership and organizational behavior that I have ever read. Coach Walsh has left us the playbook to his Pro Football Hall of Fame success that we can easily translate and apply to our roles as business leaders.

Published by Thriftbooks.com User , 13 years ago
I've just completed reading the subject book and came away thoroughly impressed with the late coach's philosophies. One doesn't associate his level of intellect with the NFL and in retrospect, his success seems almost inevitable. His attention to detail was absolute and he was a true visionary, changing the game forever w/ the fabled west coast offense. I found myself wondering at times if he ever questioned the career path that he'd chosen. With his intellect, he probably could've succeeded in many other disciplines and at the end of his life, was he truly satisfied with his legacy as a "football coach"?

Published by Thriftbooks.com User , 13 years ago
Whenever a list of the NFL's greatest coaches is formulated, Bill Walsh's name is usually included with those of other Hall of Famers such as Paul Brown, George Hallas, Tom Landry, Vince Lombardi, Chuck Noll, and Don Shula. I was especially eager to read this book, written with Steve Jamison and his only surviving son, Craig, because I wanted to gain a much better understanding of Bill Walsh's leadership style and management preferences during an illustrious career as a head coach in the NFL: a record of 102-63-1 with the San Francisco 49ers, winning ten of his fourteen postseason games along with six division titles, three NFC Championship titles, and three Super Bowls. He was named the NFL's Coach of the Year in 1981 and 1984. Especially in recent years, there have been many articles and books written about how to develop peak performers. (Some of the best observations and insights are provided by Erika Andersen in her book, Growing Great Employees.) The most highly-admired CEOs tend be those who were especially effective developing high-impact leaders among those in middle management. At GE, Jack Welch devoted at least 20% of his time to mentoring high-potential middle managers and his successor, Jeff Immelt, continues to do so. Given that, now consider the fact that a total of 24 head coaches in the NFL were once an assistant coach on his staff at one time, and many of them led teams to victory in the Super Bowl (e.g. Brian Billick, Jon Gruden, Mike Holmgren, George Seifert, Mike Shanahan). Some of Walsh's greatest skills were those of a teacher. Many who recalled their association with him after his death (from leukemia in 2007) made it a point to praise his intellect, energy, scope and depth of knowledge, enthusiasm, insatiable curiosity, and especially his passion to help others to understand what great success required and how to achieve it. In the introductory essay, "A Leader's Book for Leaders," Craig Walsh identifies five "key" players in his father's life: Joe Montana (the first quarterback he drafted who led the 49ers to all of their Super Bowl victories), John McVay (vice president and director of the 49ers' operations while Walsh was head coach), Mike White (a long-time personal friend and a fellow assistant coach at U. Cal Berkeley), Bill McPherson (a defensive assistant coach while Walsh coached the 49ers), and Randy Cross ("a great offensive lineman [and a] member of the San Francisco 49ers for thirteen years including his first three, which were pre--Bill Walsh seasons"). All of them accepted an invitation to "contribute their analyses of the leadership philosophy of Bill Walsh and expand on the comprehensive lessons my father offers [in this book]...these five were asked and kindly accepted the invitation to more fully explain the `genius' of Bill Walsh." Their contributions are substantial. Nonetheless, this is still Bill Walsh's book. In the Foreword, "His Standard of Performance," Montana praises Walsh's ability "to t
Trustpilot
Copyright © 2022 Thriftbooks.com Terms of Use | Privacy Policy | Do Not Sell My Personal Information | Cookie Preferences | Accessibility Statement
ThriftBooks® and the ThriftBooks® logo are registered trademarks of Thrift Books Global, LLC