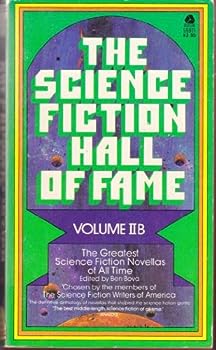 by Isaac Asimov and Jack Vance

This description may be from another edition of this product. Edited by multi Hugo Award-winning author Ben Bova, The Science Fiction Hall of Fame, Volume Two B is the definitive collection of the best science fiction novellas--chosen by the members of the...

Published by Thriftbooks.com User , 11 years ago
Every single story (novella?) in this book is excellent. While I am not a huge fan of each of the authors, I think these tales represent the best concepts of science fiction and are extremely well-written. There is enough variation of style and subject to strike a chord with most readers. This book was a great read and well-worth the investment of time and money.

Published by Thriftbooks.com User , 13 years ago
Just to clarify for anyone who may not know, this book and the others in the series are REPRINTS. Not just story reprints but the book in it's entirity is a reprint. This is not meant as a knock against this fine collection of science fiction, but just to give you more buying choices and possibly save buying a book you already have. Nice new cover!

Published by Thriftbooks.com User , 13 years ago
The follow up to Volume Two A, which also like this anthology, contains eleven novellas published from 1929 to 1964, is a strong selection; however in fact Volume Two B is a boomer era collection containing one tale from 1928 (close enough for government and sci fi collections), three from the forties, five from the fifties, and two from the sixties. The authors for the most part remain famous, a virtual who's who to include Asimov, Blish, Budrys, Cogswell, Forster, Pohl, Schmitz, Sherrod, Shiras, Simak, and Vance. Some of the entries like "The Martian Way", "The Midas Plague" and "The Witches of Karres" remain popular. The choices are solid as none are bad though some handle the test of time better. This reviewer especially enjoyed "Earthman Come Home by James Blish having remembered reading it in high school. The key to this anthology and its predecessor are that it is just about all story; in this case 526 pages of stories with no padding except for a brief two and half page introduction to explain the voting process. Great look back at some of the pre Nebula Awards age, The Science Fiction Hall of Fame Volume Two B is a strong enjoyable compilation that validates how entertaining science fiction was especially from 1947-1961. Harriet Klausner

The Second Part Of The Best Novellas And Long Novelettes

Published by Thriftbooks.com User , 14 years ago
This is the "Science Fiction Hall of Fame" (Volume IIB), edited by Ben Bova; the second half of the second volume. This volume was published in 1973, and as with the Volume I, there were a set of criteria for which stories were selected. In this case the stories that were voted on had to be published prior to 1966, and there could be no more than one entry per author, although this limitation did not exclude authors who were published in Volume I, but was a limitation within Volume II itself. Both volumes IIA and IIB are for works which are longer novelettes and novellas, i.e. stories of more than 15,000 words. Volume I was arranged in chronological order of when the stories were published, but each of the Volume II books are arranged alphabetically by author within each sub-volume. Not surprisingly, with the longer stories, there is a shorter table of contents than for Volume I, with just 11 stories each in Volume IIA and IIB. But what maybe lacking in quantity is made up for in quality, with such stories as: * The Martian Way by Isaac Asimov - novella * Earthman, Come Home by James Blish - novelette * Rogue Moon by Algis Budrys - novella * The Specter General by Theodore R. Cogswell - novella * The Machine Stops by E. M. Forster - novelette * The Midas Plague by Frederik Pohl - novella * The Witches of Karres by James H. Schmitz - novelette * E for Effort by T. L. Sherred - novelette * In Hiding by Wilmar H. Shiras - novelette * The Big Front Yard by Clifford D. Simak - novella * The Moon Moth by Jack Vance - novella Actually, there is nothing lacking in quantity here either, as this sub-volume is over 550 pages, as was the first sub-volume. This volume, taken as a whole, does a little better job of balancing out the different eras of Science Fiction than Volume I did. At the same time, the quality of the collection remains at the highest level, with classic stories from start to finish. In addition to the stories themselves, there is an introduction by Ben Bova, but it is the same introduction that was included in Volume IIA. One could argue over whether or not there were other stories which should have been considered, but clearly every story here is very good and worthy of consideration.
Copyright © 2020 Thriftbooks.com Terms of Use | Privacy Policy | Do Not Sell My Personal Information | Accessibility Statement
ThriftBooks® and the ThriftBooks® logo are registered trademarks of Thrift Books Global, LLC