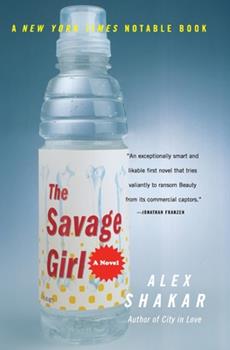 What is the next trend -- the next killer app? This question is very much on the mind of Ursula Van Urden, a burned-out art student who, after her supermodel sister Ivy's widely publicized suicide attempt, has found work as a trendspotter for Tomorrow, Ltd., in the volcano-shadowed metropolis of Middle City. Armed with only a sketch pad and a mandate to find the future, Ursula discovers a homeless girl who hunts her own food and lives on the street...

The Savage Girl Will Change Your World

Published by Thriftbooks.com User , 19 years ago
This book questions the very nature of image - something that (whether we like it or not) is a very real part of all of our lives. As socially hierarchical creatures, image provides the primary basis that we observe the people around us and judge ourselves accordingly. Read this book! It will change your world...

Published by Thriftbooks.com User , 20 years ago
Alex Shakar's first novel is an incredible (somewhat Pynchon-esqe) trip into a slightly alternate world - to a city just strange enough to separate it from any real city on earth, with high-rises on a volcano called the Black Tower, with a museum of Post-moden Art, and neighborhoods like Hipsterville. But it's a city with malls, parks, video arcades, Calvin Klein ads and very real people such as Shakar's protagnist, Ursula Van Urden, who has come to Mid City to take care of her sister, Ivy, a model who has just gone public with her suicide attempt. Ursula gets a job as a Trendspotter for Tommorrow, Ltd., working for Ivy's ex-boyfriend, Chas. Her job? To Find the Future. And bring it back to be used for marketing purposes.Very much in line with DeLillo's White Noise, The Savage Girl exaggerates our current media and trend-obsessed world just the slightest amount necessary to make it both larger-than-true-life and eerily accurate. Chas explains to Ursula how to look for the "paradessence" of any item - the essential paradox of its promise to consumers. Coffee promises to be stimulating and relaxing. Ice cream promises to be a sinful treat and a trip to the innocence of our childhood. It's a dead-on picture of marketing and advertising that Shakar presents and the world, presented in sketches of the population and places of Mid City, as lively and diverse as New York or San Francisco.The strength of the novel also lies in Shakar's remarkable characters who continue to surprise and grow throughout the book. I became genuinely attached to Javier, the wide-eyed prophet of The Light Age who rollerblades Ursula through the ropes of Trendpotting.An intensely readable, remarkable book.

what a great surprise

Published by Thriftbooks.com User , 21 years ago
One of the most enjoyable books I've read all year. To think, I was almost put-off by the 'science-fiction'angle. Shakar has an uncanny ability to bring the reader almost to the point of disgust with our human race, while maintaining an acute awareness of human tenderness and humor. In addition, and perhaps more to the point, it's quite a funny book. Looking forward to seeing more from this guy.

Dazzler of A Debut

Published by Thriftbooks.com User , 21 years ago
Trying to create an entire world between the covers is no easy task, but Mr. Shakar has managed it; "Savage Girl" is a fully-realized alternate universe, and perhaps it is a not-so-distant place. This is an earnest and noble "Novel of Ideas," steadily plotted and crisply written. The concepts raised will have you getting the book down from the shelf more than once. Highly recommended for the serious reader seeking something out of the ordinary.

Published by Thriftbooks.com User , 21 years ago
Alex Shakar's first novel is an amazing ride. Since it's often easiest to describe something (or someone) new in comparison to existing standards, let's try this: He has the descriptive prowess of a Tom Robbins; the pacing and complexity of Don DeLillo; the magic of Gabriel Garcia Marquez. To be sure, there are a couple of rough edges, but his surreal Middle City and the fabulous characters that live there are not to be missed.
Trustpilot
Copyright © 2022 Thriftbooks.com Terms of Use | Privacy Policy | Do Not Sell My Personal Information | Cookie Preferences | Accessibility Statement
ThriftBooks® and the ThriftBooks® logo are registered trademarks of Thrift Books Global, LLC