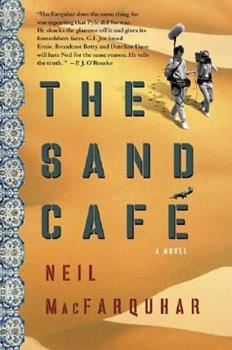 The Sand Cafe: A Novel

Dhahran Palace Hotel , Saudi Arabia , 1991. The US forces are massing on the border with Iraq, preparing to throw Saddam Hussein out of Kuwait. Men and material are arriving daily, helicopters and armor are training in the desert sand. There are rumors of Scud missiles, talk of the possibility of chemical attack, but in fact, nothing is really happening. With no story to report, the press is getting restive. The Sand Cafe is a satire of modern war...

Published by Thriftbooks.com User , 15 years ago
This is an excellent book, insightful comment on the media, Saudi Arabia, journalists egos and the miltary, yet hilariously funny at the same time. Much is based on fact, and I'm sure many of the characters are household names. I am convinced that Thea is Christiane Amanpour of CNN. There is a interview with the author on NPR which is worth listening too (I think it is available for download).

Gosh, a real writer about the Gulf War!

Published by Thriftbooks.com User , 15 years ago
Considering the amount of propaganda about the first Gulf War, and the current invasion of Iraq, Mr. MacFarquhar's writing is impressive. There's not simply one reporter at a major event, but dozens. His writing gives a real sense of the organized chaos and infighting that occurs; both on the part of the military and the press. Since satellite television provides instant communication, the requirement by the military and the press to provide a balance between adequate reporting and advising the enemy of their successes becomes a real tightrope. The author illustrates this requirement very well. His sideplot concerning Thea is well-intentioned, but misplaced. The author was trying to show that even reporters have personal lives; no question about that, but somehow the balance is not achieved. It may be that the author is more comfortable writing about reporting than personal relationships.

Published by Thriftbooks.com User , 16 years ago
This is a great novel - engrossing, topical, stylish and very funny. With this it also manages to reveal a great deal about how the press shapes and limits our understanding of war and of the Middle East/Islam. The educational side - usually coveyed in hilarious anecdotes - all mesh, and I came away exhilerated. It is also incredibly relevant to the current Iraq war and illuminates the failure of communication and understanding between the US and the Arab world. This important novel should be very, very widely read.

Published by Thriftbooks.com User , 16 years ago
I loved this book. It is beautifully written and very evocative of the region (yes, I've been!) and of the macho world of adrenalin junkie war correspondents (who seem more interested in being the first to break a story than in the story itself). With this sorry gaggle in charge of the news (particularly the on-camera TV journalists in their Banana Republic fatigues), is it any wonder that nobody knows what the hell is going on in this or any other war? You won't find any Robert Capas here. What you will find is a brilliantly observed picture of war reporting from someone who has clearly been there. I totally agree with the Washington Post's take that "... few novels so honestly portray what reporting abroad is like in the era of the American colossus." And (big bonus) it made me laugh out loud in the process.

Becoming a Journalist or Dating One

Published by Thriftbooks.com User , 16 years ago
This book should be mandatory reading for anyone who wants to become a journalist or date one. Imagine M.A.S.H. meets Sex in the City with a little Jon Stewart thrown into the mix. A crowd of mostly youthful, virulent, edgy thirty-somethings with fire in their bellies as well as their loins are stuck for seven months in a 190-room Saudi hotel desperately looking for the next big scoop and a little warmth, with very limited supplies of either available. They lie, they cheat, they broadcast the most intimate details of their sex lives with colleagues, they literally hit each other, and somehow they still manage to broadcast the news. The relatively small number of excellent journalists heroically stand up to a bewildering gauntlet of obstacles from cut throat colleagues to a dominating Pentagon, which tries to assert complete control over what the American public is allowed to learn about the Gulf War. The writing in The Sand Caf? is terrific, insightful and hilariously funny. I read every chance I got. There's a lot to learn from this tour guide about how the media actually covers a war or fails miserably in the attempt through laziness and incompetence. Aside from getting an appalling sense of how the news is made, I also learned much about the military, Kuwait, Saudi Arabia, Arab attitudes towards one another and the West, about fanatics and why they are tolerated, about Osama bin Laden and other terrorists, not to mention a bit of history. All in all it's a great orientation to an ever-important region. I loved reading it, and so will you.
Trustpilot
Copyright © 2022 Thriftbooks.com Terms of Use | Privacy Policy | Do Not Sell My Personal Information | Accessibility Statement
ThriftBooks® and the ThriftBooks® logo are registered trademarks of Thrift Books Global, LLC