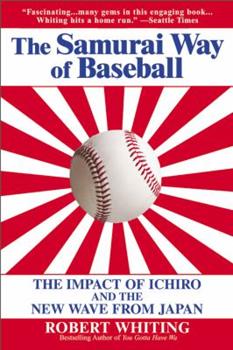 The Samurai Way of Baseball: The Impact of Ichiro and the New Wave from Japan

Ichiro...Nomo...Hasegawa...Hideki Matsui...one by one they have come to America and made their mark as incredibly gifted and popular ballplayers. But this new wave of athlete-led by the sensational Ichiro Suzuki, whom many refer to as the best all-around player-is just the tip of a fascinating iceberg. Illuminating a deep and very different tradition of baseball, Whiting shows why more Japanese players will be coming to America...and how they will...

Published by Thriftbooks.com User , 17 years ago
Robert Whiting's third book on Japanese baseball, The Meaning of Ichiro: The New Wave From Japan & the Transformation of Our National Pastime (2004), deftly chronicles the flight of elite Japanese baseball players to the Major Leagues over the past 15 years (although the first Nipponjin to play for a major league franchise was actually Masanori Murakami in SF in 1964. (detailed in Chapter 4). As the title suggests, Whiting's early portions of the book focus on the Zen-like education of Ichiro under the tutelage of his father and practicing Buddhist, Nobuyuki. His father ran a family-owned electrical parts factory but at 3:30 everyday, Nobuyuki excused himself from work and took his son to the neighborhood field to play ball. After some jogging and light game of catch, the nine-year old Ichiro would throw 50 pitches, take 200 swings at pitched balls, and field 50 balls each both as an infielder and outfielder. Dinner and homework began at 7pm and when completed, father and son would head out to the nearby batting center where the boy would take 250-300 swings emulating his favorite batter stars from the Japanese pro leagues. Returning home usually after 11pm, Ichiro's father would dutifully massage his son's feet for as dad said, "If the feet are healthy, you are healthy." It is little vignettes like this that give you a better understanding of why the disciplined Samurai-like Ichiro (who weighed a mere 175 lbs when signed by Seattle!) was able to break the single-season hit record this year with 262 hits (in 162 games) held for over 84 years. Still, the exploits of Ichiro may not have happened if not for what many Japanese at the time saw as the wagamama (selfish) attitude of Hideo Nomo in 1995. Whiting points out that an odd clause in the contract between Japanese and Major League baseball as well as strict owner rules regarding player rights limited the ability of Japanese players to move from team to team within Japan and virtually prevented players from jumping ship to the major leagues as well. All that changed when Nomo, the son of working-class parents from Osaka, pushed to fulfill his dream of playing in the American major leagues--even if it went against all of the Japanese mores of the time. He (along with a Japanese-American lawyer) found a loophole in the league's rules and "voluntarily retired"-Nomo could not play for another team in Japan but was eligible to play in America. The Los Angeles Dodgers scooped him up for a mere $2 million dollars and he went 13-6 with 236 strikeouts that first year in the majors. All his pitching starts games were shown on jumbotrons to huge crowds all around Tokyo-even at the wee hours of three or four in the morning. Nomo, quite literally, become an overnight sensation on both sides of the Pacific and the rest is history; the gates had opened and other ballplayers would follow. Still, the Japanese owners tried to close the loophole but were sued by Major League Baseball.

Published by Thriftbooks.com User , 17 years ago
The best part of The Samurai Way of Baseball is the first two chapters, which follow Ichiro Suzuki's childhood and career. His father devoted his whole life to molding Ichiro into a model baseball player. Ichiro, though an excellent student, passed up college for baseball. He had a good career in Japan, then went on to a tremendous start in American baseball as a member of the Seattle Mariners. The story of a father and son so devoted to baseball and so successful is a compelling one. So what is the Samurai Way of Baseball? As Whiting settles into a broader look at Japanese baseball and its relationship with American baseball, it emerges that while the two baseballs have much in common, a big difference is in the cultural attitudes of Japan and America. In Japan, the individual works for the good of the larger group -- the family, the school, the company, the country, the baseball team. In America, the individual is self-reliant and takes himself as far as he can go, breaking records and setting new standards. Of course, both of these attributes make baseball what it is. Whiting goes into the history of baseball in Japan and the participation of Americans in Japanese baseball. American players, managers, even a few umpires, have had limited success in Japan, mostly because of cultural differences, but also because of racism in Japan. Whiting's explanation of the meaning of the word "gaijin" and how it is used is very revealing. The relatively recent entrance of Japanese players to America has been more successful. Whiting looks at the Japanese and American careers of several Japanese players. So far, there are no coaches or managers who have made the transition from Japan to America. (The title of the book was changed with the release of the paperback edition, from The Meaning of Ichiro to The Samurai Way of Baseball. This was probably an attempt to attract buyers of business/management books in addition to readers of sports/popular culture books. I wonder if it worked.) The Samurai Way of Baseball is mostly about baseball, but it's also about Japanese culture and attitudes. Japan, like many countries, is adopting a lot of American ways. Soon, they may be beating us at our own game.

A timely sequel to a classic

Published by Thriftbooks.com User , 18 years ago
In this book, Whiting revisits the experience of Japanese baseball, only this time through the eyes of Japanese players playing in the US. The biographies are well-written and focused as Whiting chooses to elaborate only on the most interesting or most pivotal points of each player's experience. But perhaps most impressive is Whiting's balanced understanding of race, racism, and nationalism on both the Japanese and American sides of the Pacific. Whiting doesn't pull any punches when addressing these issues but then again he doesn't hit harder than is warranted. I particularly liked this book because it covers the period of time during which I've been a resident of Japan (96 to present). While the earlier title "You Gotta Have Wa" was an excellent read, it felt a bit dated to me as it descibes an earlier period I never experienced firsthand. Japan has changed a bit since the bubble days and in this book Whiting manages to concisely convey many of those changes through several viewpoints. I highly recommend it even if you've already read "Wa."

A great primer on japanese baseball and its superstars

Published by Thriftbooks.com User , 18 years ago
Baseball fans with an interest in the new breed of Japanese baseball player making an impact in the U.S. Major Leagues will find Robert Whiting's book a welcome and timely introduction to the likes of Ichiro, the Matsuis, Nomo, etc. While the title may be somewhat misleading, as one would think the bulk of the book would be a biography of sorts on Ichiro, what readers are given instead is a highly readable, in-depth look at the origins of baseball in Japan and comparisons of the major differences between the US and Japanese game (practice, coaching, tactics, game philosophy, business models) that would ultimately lead to the production of players able to thrive under the brighter lights of the MLB. Ultimately though the most entertaining portions of the book are the beginning and ending chapters that serve as mini biographies and a study of remarkable contrasts on the Mariner's Ichiro Suzuki and the Yankee's Hideki Matsui.

Published by Thriftbooks.com User , 18 years ago
Following the out-of-print The Chrysanthemum and the Bat (1977) and You Gotta Have Wa (1990), The Meaning of Ichiro can be looked at as the third in a trilogy of Robert Whiting books on Japanese baseball. (He also did an as told to book with Warren Cromartie). In it, Whiting pursues the next logical step, looking at the impact Japanese players have had on the American game, and how this has changed the relationship between the two countries in terms of society in general as well as in the baseball world. Whiting examines the make-up of various Japanese players and how it affected their success in the American big leagues. Besides Ichiro, he discusses Shigetoshi Hasegawa, Hideki Irabu, Tsuyoshi Shinjo, and Hideki Matsui, among others. He also looks at how foreign managers have fared in Japan, paying particular attention to Bobby Valentine?s tenure as skipper of the Chiba Lotte Marines. Whiting points out that for many years, Americans played in Japan, but no Japanese played in the U.S and he supports a conclusion that the emergence of Japanese stars in the major leagues has been a good thing for the relationship between the two countries. This is good reading for those who are interested in international baseball and how foreign relations are effected outside of strictly diplomatic circles.
Trustpilot
Copyright © 2022 Thriftbooks.com Terms of Use | Privacy Policy | Do Not Sell My Personal Information | Cookie Preferences | Accessibility Statement
ThriftBooks® and the ThriftBooks® logo are registered trademarks of Thrift Books Global, LLC