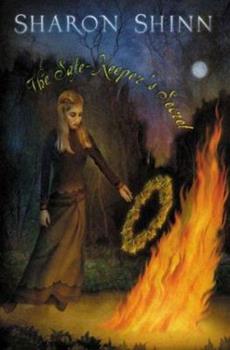 (Book #1 in the Safe-Keepers Series)

"In a time of prosperity and risk on the open frontier, a daring cattleman takes his chances on expanding westward--and on a genteel lady from another world." Swept up in adventure . . . With nothing left for him in Texas after his fiancee breaks his heart, Jeb Tuhill heads to Wyoming's Big Horn Mountains to work the huge ranching operation of wealthy English squire Moreton Frewen. In an attempt to lure investors to the beautiful, and oftentimes dangerous,...

Published by Thriftbooks.com User , 14 years ago
This is a lovely story with an original concept. It has a fairy tale like feel to it with the prose. Young girls/teens and women should all enjoy it.

Published by Thriftbooks.com User , 14 years ago
This is a beautiful book about a young woman, Fiona, and her love for her friends and family. A quick, delightful read taking place in an imaginative fantasy world. This is the only one of the series I have read, having finished it today (also having started it today - it's a very quick read) but I fully intend to read the others. I love how Fiona's feelings are portrayed, how she longs to help others while still struggling to keep the secrets entrusted to her.

A Tale of Two Children

Published by Thriftbooks.com User , 15 years ago
The Safe-Keeper's Secret (2004) is a standalone fantasy novel. One night, the King's own Safe-Keeper came riding through Tambleham, stopping at the Safe-Keeper's house on the other side. There he left a baby and a secret. Safe-Keepers exist only to keep secrets, some for just a short while and others for all eternity. Conversely, Truth-Tellers exist only to relate the literal truth. Dream-Makers exist to fulfill wishes through their magic, but cannot control the gift. In this novel, Elminstra the herb witch comes to the Safe-Keeper's house early the next morning with food and milk. She knocks on the door, calling out to the two sisters, then pushes it open after no one responds. Angeline comes to answer the knocking with a child in each arm, telling Elminstra that the girl is her sister's newborn and the boy has been left in their care. Angeline is the Safe-Keeper for Lowford. She has come to help deliver the child of her sister Damiana, the Safe-Keeper for Tambleham. Damiana will raise the two children as if they are both her own, although the whole village knows that only one is hers. In fact, everybody else thinks that Reed is the illegitimate son of the King. Reed and Fiona grow up as if they were twins. They even look alike. But Reed is full of energy, while Fiona is much more sedate. She remains calm even when Reed brings in a snake to show her and even looks for a box to keep it in for a pet. Yet Fiona always goes out to see any new thing that Reed finds in his roaming. Reed isn't sure what he wants to be, but he is willing to try anything once. Fiona has always known that she will be a Safe-Keeper like her mother and grandmother. Thomas the Truth-Teller tries to tell Fiona that she will not follow in her mother's footsteps and she hates him for it. Like most people, she seems to hate disagreeable truths. Fiona and Reed love the annual gathering in Damiana's house. Angeline and Thomas always come, as does Isodora the Dream-Maker. They make wreathes to burn on a great bonfire in the front yard and cook feasts to devour until they are all sated. In this story, Fiona and Reed live together with Damiana as their mother until death takes Damiana away. Then Elminstra insists on her granddaughter Allison moving in with Fiona, even though Reed is away learning new trades much of the time. Every time he returns, Fiona feels like a missing part of her life is now filled. This story is without adventure, has very little suspense and almost no conflict. Deaths occur, but only Damiana's passing is dwelled upon and, even then, only for its affect on Fiona. This story is mostly about the growth and development of two children and their relationships with older friends. Nevertheless, it is a deeply satisfying story with a very moving conclusion. This story is very much a fantasy without any chance of being mistaken for reality. Yet one can only wish that it were true. Some things should be real, even if only for a little

Perfect for all ages

Published by Thriftbooks.com User , 15 years ago
I read this book in one evening, despite being at least a decade older than the target audience. The author doesn't spend too much time establishing the different aspects of her world, but instead drops us into the story and explains what's needed when we need to know. That's the mark of a great fantasy writer. I immediatly picked up the next book, The Truth-Teller's Tale, because I couldn't admit this one was over. It's wonderful, fast-paced, and contains things that while written in a way that a teenager would understand are the sort of things most authors shy away from, like death, growing older, and the way life takes shape around you. An excellent book, I reccomend it for everyone.

Published by Thriftbooks.com User , 16 years ago
Although THE SAFE-KEEPER'S SECRET doesn't have the epic sweep or romance of many of Shinn's books for adults, it is in its own way a beautiful little book, charming and satisfying. I waited a long time to purchase this book becuase I wasn't sure I would like it, but I'm so glad I bought it. Though it is a simple story the characters and the fairy tale world they inhabit are endearing. I'm very much looking forward to the next two books in this series, THE TRUTH-TELLER'S TALE and THE DREAM-MAKER'S MAGIC. If they are as delightful as this book, I won't be a bit sorry that Shinn has turned her hand to writing for young adults. And for the record, I am 35! This is a book that people of all ages could appreciate and enjoy. I hope more people give it a try and approach it with an open mind. It's quite different from the Samaria books, but though quieter and simpler, still a gem.
Copyright © 2020 Thriftbooks.com Terms of Use | Privacy Policy | Do Not Sell My Personal Information | Accessibility Statement
ThriftBooks® and the ThriftBooks® logo are registered trademarks of Thrift Books Global, LLC