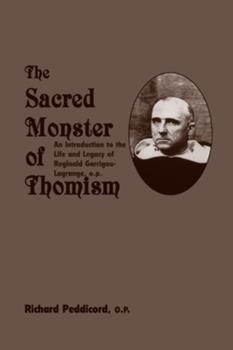 The Sacred Monster of Thomism (the epithet comes from Francois Mauriac) is the first full-length study of the life and thought of the most influential Dominican theologian in the first half of the twentieth century, and the scourge of liberal theologians everywhere. Reginald Garrigou-Lagrange taught at the Angelicum for fifty years, held the first chair of spiritual theology in the Church's history, and authored twenty-eight books and over six hundred...

Published by Thriftbooks.com User , 14 years ago
Peddicord's book isn't horrible, but it isn't all that great either. Unfortunately, there doesn't seem to be an alternate biography of Fr. Lagrange in any language. We have yet to have a biography of him written from a point of view wholly sympathetic to Lagrange's. The book moves from the beginning of his life to his death and discusses several tiffs the modernists had with him, including a large portion of the Bergon/Blondel episode. A few excerpts from modernist letters against him is also included. Maritain's disagreements on social issues is also touched on-with the sympathy going to Maritain. What you get is basically a classical liberal's take on his life. The grosser objections of the modernists to Lagrange are called excessive because they aren't as tolerant as they preach folks ought to be. A few especially radical theologians are shown as having little constructive to say in comparison to the "monster"(as if this wasn't evident already). Garrigou Lagrange is presented as a pious fellow, quite bright and well-meaning, but a bit too, well, traditional (tsk, tsk). Especially interesting are a few details about his disagreements with Congar and Maritain. An especially telling omission is that after stating that he was JPII's dissertation advisor, there is no mention of the fact that Fr. Lagrange was extremely critical of that dissertation! The attempt to rehabilitate him for the neo-modernists is a bit awkward. Information of his stance against some of the the neo-Thomists (he was very much of the tradition of the now-extremely-unpopular commentator school) is curiously absent from the work as well. All in all, it's a bit short, fairly well-written, and quite fascinating at points. Mind, it isn't as good as it could be and has its faults, but it's all we have in terms of a biography. If you have a love for his works, it is definitely worth a look. But be forewarned, for the dyed-in-the-wool adherent to the commentator school of Thomism the style is sometimes cloyingly modern. I realise that this won't be much of an issue for many readers, and I highly recommend the book, but I wanted to provide a point of view not readily found on the work.

Published by Thriftbooks.com User , 17 years ago
In Fr. Rick Peddicord's The Sacred Monster of Thomism, one encounters a man both maligned and praised in his day, although perhaps more feared than lauded, Fr. Reginald Garigou-Lagrange, O.P. It should not surprise us that Garigou-Lagrange, a man who devoted his entire life to the explication of the truths of the Christian faith, would be attacked in a world that wished to rid itself of dogma and extinguish any pangs of hypocrisy arising from society's espousal of nominal Christianity. Such intransigence in the face of "progress" won him many adversaries. The greatness of Peddicord's work rests not only in the Dominican's ability to situate his confrere historically but also resides in his analysis of Garigou's Thomism and how the senior friar's hunger for truth necessitated his often harsh reactions to those who wished that the Church would adjust her message in the modern world. This passion clearly emanated from his identity as a Dominican: Garigou embraced a life in which he vowed to preach His word for the salvation of souls. As such, he realized that letting the Kantian epistemology of Blondel or the heterodoxy of Laberthonnière go unchallenged would eventually imperil men's souls. A strict adherence to Neo-Thomism constituted Garigou's sword and shield. Throughout the work, the reader can easily see Garigou's motivations. In one of the most interesting segments of the book, Peddicord argues convincingly that modern theologians should not ignore Garigou-Lagrange's contributions to philosophy, theology, and spirituality, all of which pose significant challenges to current, popular hermeneutics. However, as an accomplished professor of moral theology, one wishes that the author would have touched upon the fundamental reasons why Garigou's modern opponents such as Roger Haight, Monika Hellwig, and Elizabeth Johnson work to undermine the legitimacy of the dogmatic teachings of the Magisterium. Their agenda goes beyond that of lessening the transcendence of the divine or stirring up doubt in the perpetual virginity of Mary. Still, this is an introduction, and we can only hope that the next work by Peddicord will shed more light on the tension between classical Thomism and modern theology. Regardless, The Sacred Monster is both well researched and insightful. Perhaps its greatest attribute is that it brings the thought of Garigou-Lagrange back into current theological inquiry, although one cannot be sure that the old frère dominicain will win any more allies in a world that unfortunately adheres to much of the same heterodoxy he attempted to eliminate during his life.
Trustpilot
Copyright © 2022 Thriftbooks.com Terms of Use | Privacy Policy | Do Not Sell or Share My Personal Information | Accessibility Statement
ThriftBooks® and the ThriftBooks® logo are registered trademarks of Thrift Books Global, LLC