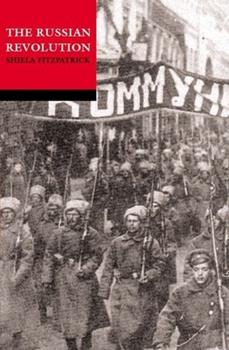 The Russian Revolution had a decisive impact on the history of the twentieth century. Now, following the collapse of the Soviet regime and the opening of its archives, it is possible to step back and see the full picture. In this classic work, the author incorporates data from archives thatwere previously inaccessible not only to Western but also to Soviet historians, as well as drawing on important recent Russian publications such as the memoirs...

The Russian Revolution by Sheila Fitzpatrick

Published by Thriftbooks.com User , 14 years ago
I am enjoying this book immensely. I was looking for a good intermediate source to transition me from a Wiki-level knowledge of the RR (which I already had) to the point where I felt capable of tackling a professional academic tome on the RR (which I would like to someday do). Fitzpatrick's book fits this bill nicely. Each chapter covers a certain time period and starts out with a short intro (just a few pages) that mentions the major controversies among historians about how to view the events of this period. The author occasionally takes a side in these debates, but usually just presents them so that the reader is aware of their existence. Then she launches into the chapter, which pretty much just consists of a summary of events. The book is dense with facts but is also a very quick and easy read. In other words, the perfect thing for someone who is interested in this topic but not used to reading huge academic history books, or for someone who just wants the facts without any thesis that the author is trying to prove.

The Russian Revolution did not end in 1920.

Published by Thriftbooks.com User , 19 years ago
Fitzpatrick's short book about the Russian Revolution is so concise one has to wonder if she skimped on the facts. This is not the case. Anybody reading the book can only remark that thickness is not indicative of weight. All one needs to know about the Russian Revolution is in this slim volume.Fitzpatrick's main contention is that the Russian Revolution did not end in 1920, but rather in the 1930s when Stalin consolidated his power and put in place a new system which suceeded the Tsarist regime. Stalin did this by educating a new elite from the working class and placing them in the Party and Government. Future leaders came from this group. The two five year plans stabilized the revolution and placed a new order on the country.I also found the characterization of Lenin good. Lenin put in place a situation which led to the rise of the dictatorship of Joseph Stalin. Lenin is seen as both good and bad. There are more meaty books about the Russian Revolution. There is not one which is more concise and explains all the facts.

A Look at a 15-Year Long Revolution

Published by Thriftbooks.com User , 19 years ago
As the title indicates, the gist of Fitzpatrick's argument is that the Russian Revolution was not completed until 1932. Only at this time did the contours of Russian society become stable. Massive numbers of proletariats were educated and became bureaucrats who helped achieve Russian industrialization.Other points in this book are that: (1) The Bolshevik party was a mass party in 1917. Lenin was no murdering dictator but was a persuasive leader. His threat to resign from the party pushed the decision to sign the Brest-Litovsk treaty. (2) The peasants were suspicious of the Bolshevik aims to ignite class hatred in the countryside. The Bolsheviks needed to send thugs into the countryside to wage war on a reluctant peasantry in order to force industrialization on the nation.Although this book is relatively short, especially considering the time period covered, it is very meaty and requires careful reading to understand the main concepts.

Published by Thriftbooks.com User , 20 years ago
Professor Fitzpatrick has done an excellent job in this well written, concise book. Although not a hefty book nevertheless she effectively sparks the reader's interest in Soviet History while suppling ample information allowing for a general understanding of Soviet Russia up until the end of Stalin's reign.

Published by Thriftbooks.com User , 24 years ago
I read this book for a Russian History class, and I think Fitzpatrick does an excellent job of exploring the possibilities of this tumultuous era. It is a fast read and focuses on the heart of the matter. No extensive knowledge of Russian history is necessary to understand the main points of this book as she explains the context of all points.
Trustpilot
Copyright © 2022 Thriftbooks.com Terms of Use | Privacy Policy | Do Not Sell or Share My Personal Information | Accessibility Statement
ThriftBooks® and the ThriftBooks® logo are registered trademarks of Thrift Books Global, LLC