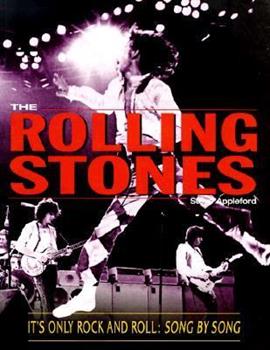 It's Only Rock 'n' Roll: The Stories Behind Every Rolling Stones Song

Coffee table book. The Rolling Stones Song by Song. This description may be from another edition of this product.

Published by Thriftbooks.com User , 22 years ago
A great book if you love the Stones, it has a nice sarcastic streak and is always interesting. Tells some great stories behind the songs.

Published by Thriftbooks.com User , 23 years ago
Steve Appleford takes the reader on a 35 year journey with the Rolling Stones. He highlights some of the ups and downs of the band members, touching on both their professional and personal lives. But the majority of the book is dedicated to the songs. Appleford does make a few mistakes along the way. For example, on page 12 he states that Mick Jagger was born on July 26, 1944. He got the month and day correct, but the year was actually 1943. And he lists the single "Time is on my Side" as reaching #80 on the U.S. charts. It was, of course, a top ten hit reaching #6. A critical analysis is presented for each of the songs and, while I don't necessarily agree with every review, they are generally well- thought out and pretty accurate. I should also note that only Rolling Stones compositions are reviewed. The covers of other artists'songs, along with the live and greatest hits cd's, are left out. The Rolling Stones have stood the test of time as no other rock and roll band has. This book is a testament to their perseverence. And, as everyone knows, especially those of us fortunate enough to see them live in concert, the Rolling Stones are and will always be, THE WORLD'S GREATEST ROCK and ROLL BAND!

Published by Thriftbooks.com User , 23 years ago
A must for any die-hard Stones fan! This book details the eclectic catalog that the Stones have written over the years. This book gives the details and behind the scenes of every Stones song ever recorded. Through a behind the scenes look at each song, the book chronicles the band from their beginnings to their current Bridges to Babylon CD. Their beginnings as a rhythm n blues band, their artistic peak through Beggars Banquet, Let It Bleed, Sticky Fingers, and Exile, the disco/funk/drug influenced 70's, their return to the top with Some Girls and Tattoo You, the forgettable and tumultuous 80's to their resurgence as the Greatest Rock n Roll Concert Draw on Earth in the 90's. If you are a Stones fan, do yourself a favor and order this book.

This book is perfect for serious Stones enthusiasts.

Published by Thriftbooks.com User , 23 years ago
If you ever wanted to know how "Start Me Up" came to be included on "Tattoo You", or whether the whole band played on "Happy", this book is for you. I love the Stones' music and now knowing how they wrote all of it adds a whole new way of listening. It's not totally complete, as it only cover songs actually written by the Stones; anyone would know many of their early classics were covers. Also, the authors do not mention certain albums like the live records, or any of the compilations. The emphasis here is on the albums and the songs within. One more thing, don't be annoyed when they review "Dirty Work"; I'll tell you now, Ronnie Wood is not credited by Appleford with writing any of the music. But all in all, this is as good as you could ask for. The author definately knows his songs, and I guarantee you will learn something new every time you re-read this book.
Trustpilot
Copyright © 2022 Thriftbooks.com Terms of Use | Privacy Policy | Do Not Sell or Share My Personal Information | Accessibility Statement
ThriftBooks® and the ThriftBooks® logo are registered trademarks of Thrift Books Global, LLC