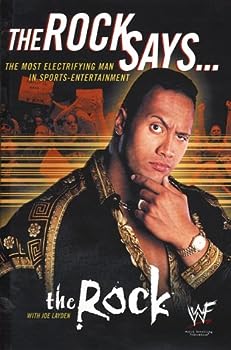 by Joe Layden and Dwayne 'The Rock' Johnson

The Rock says. . . "Know your damn role--and shut your mouth!" But that simple catch-phrase, embraced by the millions and the millions--of The Rock's fans, can't begin to capture the spirit and... This description may be from another edition of this product.

The Most Electrifying Book I have ever read

Published by Thriftbooks.com User , 22 years ago
The Rock, the most electrifying man in sports entertainment tells his life story in his book, The Rock Says. Starting when the great One, Dwayne Johnson was born on May 3, 1972 all the way up to his professional wrestling career. Dwayne Johnson, a.k.a. The Rock tells all his secrets. Learn about his football career, his wife Dany, and how he came up with all of his best promos, like "Hey Jabroni," and "Know Your Role." In this book the Rock recalls his injury prone football career that fell down the drain, and how living that kind of life is not so glamorous at all. Read about how he got into the WWF after he lived off of spaghetti and slept on putrid stained mattresses. Learn about how he became The Rock. Read and find out about his "fake" rivals with Stone Cold, The Undertaker and Triple H. The Rock tells about his best friend Owen, and how his death affected the WWF. This is a great book about a person's life. So take a stroll down Jabroni drive, hook a left at the corner of Know Your Role boulevard, check yourself into the smack down hotel, and pick up a copy of The Rock Says like the millions and millions of The Rock's fans and enjoy the book. "If ya Smell What The Rock Is Cooking".

I Went One on One With The Great One.

Published by Thriftbooks.com User , 23 years ago
-Last Satuarday (January 8th, 2000) was probably the biggest day of my life. The Rock was signing autographs for his new book, "The Rock Says..." at the world's biggest mall, the Mall of America in Bloomington, Minnesota. The setting was perfect. Being that the mall was only 4 miles from my house, I knew it was the place to be. I waited from 6:30am until 2:00 when he started signing and was #8 in line out of approx. 7,400 people in line. Overall, the newspaper reported 16,000 fans in the area he was signing, a record. Just to get a glimpse of the People's Champ. -So during 7 1/2 hrs. in line, I got my copy early at the mall, and read the whole book in about 4 hrs. I think it's really great. What's everyone's problem? I read Foley's book too and I admit, they are a world apart, but I judge a book by how much the reader enjoys it in general. If you are concerned about what he actually wrote in it and his wording wasn't right and the details are scattered, then that's different. In one of these reviews posted below, there is great anger from a reviewer that his career was more handed to him than Foley. It's true, but is that the problem w/ the book? Give me a break.....Also, The Rock did work hard. He wasn't popular until after nearly 3 long years and he created his character, which must have been difficult. The Rock has the best expressions, the best moves, and he is the best talker. In this book, a lot of these traits are talked about and there are a lot of interesting facts and information. Before I met The Great One, there was an announcement that The Rock will allow people to get up to 3 books signed each person. of course I got 3. They made it clear not to get upset at mall officials because it was The Rock's decision. He works hard to make people happy. When I met him, here's what happened: He greated me and HE gave me a handshake. He tole me thanks for coming out and take care of yourself. He was all smiles and always looked up. He spent over 1/2 a minute on me and that's with 7,400 people to go through in 2 hrs. (The next day, the newspaper reported 1,600 people got autographs) He knew that he needed to move fast, yet he took time to greet the fans and be REALLY friendly. He also gave a little speech before signing. This is his true character, and he is really a great person. The book shows that, and gives the inside scoop. If you are a Rock fan, believe me, you will like it. It wont meet Mick Foley's standards, but hey, this is a different style we are dealing with here. People shouldnt get so upset. It's a great book and easy to follow. I found flaws and ways I think could have made it better, but everyone finds flaws and there was NEVER a dull moment in the book. Its really exciting, and also full of bw and full color pictures. I recommend "The Rock Says..." very highly.

BETTER THAN HARRY POTTER, THE ROCK IS THE BEST

Published by Thriftbooks.com User , 23 years ago
This was GREAT. It was better than i thought it would be. If anybody thought Mandkind's book was good they should read this one. It is truly "THE MOST ELECTRIFYING BOOK IN THE WORLD TODAY" IF YA SMELL WHAT THE ROCK IS COOKING

The Rock Will Electrify You!

Published by Thriftbooks.com User , 23 years ago
I bought the Rocks book yesterday and let me tell you i finished it in about 5 hours, i could not put it down, from the tails of him as dwayne johnson, flex kavana and none other that the rock this book is very well written and has many stories you will remember for a very long time, i suggest anyone that watches profensional wrestling to buy this book as soon as possible, if you smelllllll what i am cooking!

Published by Thriftbooks.com User , 23 years ago
The Rock Says is not just about wrestling and that is a very pleasant surprise, I enjoyed gaining insight to the man behind the character. I especially appreciated the honesty in which he share expierences that were not only extremely personal but also very revealing, allowing the reader to share and understand his triumphs and his weakness and mistakes. The book reads quickly allowing the reader to move through the authors life to the moments that were most influential (and embarassing)to the individual we see on TV today. I enjoyed the second half of the book were we were given perspective from not only Dwayne Johnson but The Rock as well. (You can't help but laugh out loud at the characters outrageous comments) I have to honestly say that everytime I look at the character on Television I will have a greater appreciation of who he is, it will bring the reader much closer to the character and I imagine, can only increase the his popularity and visibility.
Trustpilot
Copyright © 2022 Thriftbooks.com Terms of Use | Privacy Policy | Do Not Sell My Personal Information | Cookie Preferences | Accessibility Statement
ThriftBooks® and the ThriftBooks® logo are registered trademarks of Thrift Books Global, LLC