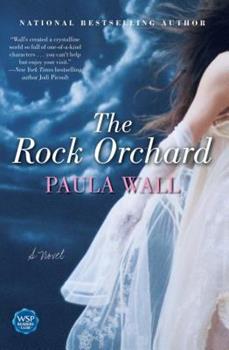 Some women can touch a man and heal like Jesus. The man who sees sunrise from a Belle woman's bed will swear he's been born again. When it came to men, Charlotte Belle strictly ascribed to the law of catch and release. As soon as she could get a man out of her bed, she threw him back in the stream. No, Charlotte did not need a man. She had money. She had her driver, Mr. Nalls, for heavy lifting. Sex? Her pond was well stocked. What else does a woman...

Published by Thriftbooks.com User , 15 years ago
The Rock Orchard is one of the most unique novels I have read in a while. This darkly funny book about the Belle women, a dynasty of rich, independent, albeit promiscuous women had me in stitches as I read this very engrossing book. Set in the beginning of the twentieth century, we are introduced to Charlotte Belle after getting a preface of the Belle woman who started it all: Musette Belle. Charlotte is a more morally loose Scarlett O'Hara. She had every man she wanted when she wanted them without wanting commitment. Her maid as well as the entire population of Leaper's Fork, Tennessee, disapproves of Charlotte (except for the men who bed her), but she is unfazed by their criticism, even when they call her "rich white trash." When she decides to look after her niece Angela after her sister dies, Lettie, the maid, is hopeful that Angela would be different. After all, she is intelligent and has a kind, charitable heart, but she shows signs of Belle-like behavior nevertheless. And when she has a child at seventeen and no one knows who the father is, all hopes of a better Belle woman are gone. When Charlotte inexplicably develops unprecedented feelings for a reverend and a neighborhood doctor becomes obsessed with Angela, is love in the horizon for these notorious women? I love the backdrop of southern life during the 1920s and 1930s (most of which takes place in the thirties) and the novel's colorful, amusing characters. Charlotte is one unique heroine who defies all propriety in a bible belt town. She is one of the most compelling female characters I have recently read and I enjoyed her devil-may-care attitude. Angela is also a very interesting character. She walks around barefoot, wearing rags, and carrying her child against her hip as though she lived in a trailer instead of a wealthy home. It made me laugh that Doctor Adam found her so irresistible despite the author's description of her. I enjoyed imagining the time setting and images of the south. This novel is also very funny. With a narrative that contains such hilarious passages like the one regarding the town folks' outrage with Angela's public breast feeding and their attempt to stop it that went, "Despite the Christian Women's Charity trying their darnedest to have breast-feeding banned in public, not one city councilman could bring himself to say the word `breast' at the public hearing. Since they couldn't outlaw `feeding,' the issue was dropped." Witty lines like that one are found throughout the book. The Rock Orchard is one great read! Paula Wall is a talented author and I look forward to reading more of her stuff in the future.

Published by Thriftbooks.com User , 16 years ago
Novels can touch your heart and expand your world. But first, even the most serious art has to keep you paying attention. Right away, the rhythm of Paula Wall's style got me patting my linguistic foot, and from time to time, I found myself doing something books only occasionally make me do. My wife came to see why I was laughing. Then I read Rock Garden to her. Several times, we had to let our tickle boxes run down before we could go on. At first I thought, if you can't write serious literature, at least keep 'em laughing. The author used to be a highly successful humor columnist, after all. She started her career in our hometown. We were happy to see her novel get published. The sheer fun of it quickly reassured us she's plenty good enough to pull it off-to at least entertain. That was early in the book. The chapters are short. I wasn't expecting serious literature. I wasn't paying close enough attention. And Ms. Walls is a tad sneaky. I'm slow, but after 20 pages, what had seemed a loosely connected string of delightful anecdotes started to gel. The story, I realized, was going somewhere, somewhere important enough to make you care and keep you looking forward. Then came some juicy surprises. And the characters, who had grabbed me from the git-go, continued to unfold right up to the end-authentic and multifarious. I used to think my English professors talked too much about theme. I won't be surprised when professors start teaching Rock Garden. It's an eminently comprehensible example of a theme-prominent novel. That hits you on Page 1, well before the plot takes shape. Deep down, I think most guys acknowledge to ourselves that women get a lap ahead of us around the fifth grade. Some geniuses like Michelangelo may have excelled without womanly inspiration-maybe even by ignoring women-but most of us need our Angelas and Charlottes. It's bad enough that sitcoms and commercials make us guys look feckless. The trouble with Ms. Wall's good-natured reverse sexism is that men can't help eating it up. My tastes are narrow. It usually takes The New York Times or the likes of Elmore Leonard to alleviate my awareness of fiction, to make me forget that what I'm reading is stuff somebody made up. The smallest hint of surrealism usually puts me off. It's hard for a habitual skeptic to enjoy run-of-the-mill fiction. But good storytellers like Tolkien can make you take orcs seriously. Ms. Wall doesn't stretch things that far-just a little clairvoyance now and then. The real realism of fiction, of course, has little to do with verisimilitude. Even in crime thrillers, it's the depiction of the human heart that counts. The endings of few novels, even those I've enjoyed, are fully satisfying to me. You want good people to prevail, for worthy striving to pay off, yet I also need a plot to lead believably to its conclusion. This ending is convincing, and it fulfills hope and clinches Ms. Wall's theme. I started reading Rock Garden because I was born in Leape

Published by Thriftbooks.com User , 16 years ago
Don't start this book until you have some time because to say it's hard to put down is a definite understatement. What a laugh riot. People around me kept asking me what I was laughing about ....The Belle girls, the town minister, the town doctor...all have quirky ideas and each one becomes a real person ......I loved all the characters....well almost all. If you want to really enjoy a good book.....this is the one. If you're from the South....well...that will just make it even more fun. the only way it could have been more fun ....if I had been sitting on the beach reading.

Published by Thriftbooks.com User , 16 years ago
Reading Paula Wall's debut novel, The Rock Orchard, is akin to sitting down to a Sunday dinner with Southern fried chicken, corn on the cob, sliced tomatoes and `nana puddin' for dessert. The Belle women, Musette, Charlotte, Angela and Dixie Cup, of Leaper's Fork, Tennessee, are at first glimpse, an odd family of enormously rich, freethinking and determined females. Stunningly beautiful, they tend to be the frosting on every man's desirability cake. The ultra-strong Charlotte and Angela Belle are both surrounded throughout by an array of memorable characters that provide both texture and flavor and move the plot along at atypically Southern speed. The Yankee doctor, Adam Montgomery, has chosen medicine for all the wrong reasons and sets up practice in Leaper's Fork hoping to be a big fish in a little pond. The beautiful Lydia is his vacuous trophy wife. Widowed Baptist preacher, Thomas Jones, comes to town to replace the hellfire and brimstone spouting Reverend Lyle. Disillusioned with life, apathetic Thomas walks around like a corpse until he sets eyes on Charlotte Belle. Before he can recite the Ten Commandments, his charisma peaks along with his libido and the church pews begin to fill. Boone Dickson, the handsome young Jack-of-all-trades, is dirt poor and hails from the wrong side of town. He is blessed (or cursed) with an enigmatic animal magnetism that ultimately lands him a welcomed spot inside the good doctor's mansion, if only in the closet. Throughout the book, Wall deftly strings together complete opposites. The rich and poor, black and white, good and evil, even holier-than-thou and cynical non-believers. Wondering how these characters can possibly blend, will keep you turning pages. It is a beautifully written book by a serious writer who knows when to inject a line or two of humor, when to take her characters down a notch or two or snatch `em bald-headed. Wall is adept at lacing plot and characters together so that the story comes out just right. The Rock Orchard is indeed comparable to Sunday dinner in the South. While you perceive a variety of textures and tastes awaiting your palate, you somehow intuit that, by the end of the meal, every morsel will have gone down as easy as cornbread and buttermilk.

Published by Thriftbooks.com User , 16 years ago
Leeper's Fork, TN ain't Mayberry, but I've known and been related to almost every quirky character in town. I laughed out loud, and shook my head with the knowledge that Paula Wall was related to these people too. This fast paced southern tale of small town life is laugh outloud funny, a flutter of angle's wings touching and break your heart sad. If you love Deborah Smith then you must read Paula Wall.
Copyright © 2020 Thriftbooks.com Terms of Use | Privacy Policy | Do Not Sell My Personal Information | Accessibility Statement
ThriftBooks® and the ThriftBooks® logo are registered trademarks of Thrift Books Global, LLC