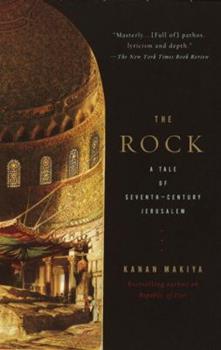 The Rock: A Tale of Seventh-Century Jerusalem

The Rock of Jerusalem is one of the world's most spiritually resonant and politically contentious sites: where Adam first stepped upon leaving Paradise, Abraham attempted to sacrifice Isaac, Jesus preached, and Muhammad began his night journey to heaven, . Sorting through the rubble of the three competing faiths, Kanan Makiya has woven a vivid tapestry from centuries of legend and belief to imagine the origins of Islam's first monument, the Dome of...

Published by Thriftbooks.com User , 16 years ago
I recommend Makiya's novel to anyone having a serious intent to gain a better understanding of the cultural divide between the "western world" and the middle eastern Islamic world. In spite of being only 261 pages of story telling, it can be a deep read from time to time if you read critically - the notes on the sources he used run 65 pages. Mr Makiya has used the historical fiction approach to connecting Islamic history and religious traditions to Judaic and early Christian history and religious traditions. He used this approach in order to present a comprehensible story to readers who are not scholars in the histories of these religions. For readers raised in a Christian culture, his story provides the connecting links between the three religious traditions and, of course, begs the question "Why have the religions that built on a common base so often been such fierce enemies? Ask the veterans of the US Civil War the same question. Mr Makiya does not directly answer this question, he leaves the answer to the reader, perhaps because each culture involved will have a different answer. It is culture that determines how a people will interpret a given set of religious "facts" to promote its perceived needs and cultures change very, very slowly. The author's knowledge extends far beyond the Jewish Bible, the Koran and the Christian New Testament into that bewildering morass of traditional lore associated with these religions, principally that of Islam and Judaism. I am in no position to criticize the details of his construction but it seemed to me to be stronger on Islam and Judaism than on early Christianity,perhaps because I know more about the latter religion. Although centered on the history of Islam from the time of Mohammed to when Islam conquered Jerusalem and built the Dome of the Rock, the story does not shirk telling about the unsavory as well as the uplifting events in the history of Islam. An obvious labor of love, the author waxes poetic at many points in the narrative, introducing the reader to Islamic and Judaic poetry as well as his own. "Western" readers often do not appreciate how much more the cultures of the eastern and southern shores of the Mediterranean are based on their histories and religions than are the current cultures of the European-derived peoples. Although one reviewer has criticized the author for not making the characters alive enough, I disagree. He seems to me to have hit a good balance between making his characters live and give the story continuity but not letting their stories obscure the emergence of Islam into a region deeply infused with Judaic and Christian sentiments and histories. One criticism that I do have - the author did not run the religious histories back beyond Abraham to Melchizedek, king of Salem (now known as Jerusalem) and the emergence of the Israelite religion from a more ancient tradition. The seeds of monotheism grew in many places - Akhnaten's Egypt, Melchizedek's Salem,

Crossing the Bridge of Intolerance

Published by Thriftbooks.com User , 19 years ago
Kanan Makiya succeeds where many other authors failed. A historical novel about the interplay of religions. Like Amin Maalouf, Kanan writes eloquently and with great authority about a subject difficult to most readers. He destroys long held views about identity and shows the human underneath the religious dogma. A truly wonderful work, I felt I was there and close to the characters, I had a difficulty in putting the book down, and I was upset at having finished it. I reread many segments.Please keep writing kanan, please keep enlightening us, so that more people can cross the bridge of intolerance.

A must read for people of all faiths.

Published by Thriftbooks.com User , 19 years ago
This was a wonderful book. I had roughly two minutes to select a book at the library and this one was it. This book moved me to tears in several places. The imagery was spectacular and the characters came to life - it was like I was there. I have recommended it to all my friends as a must read. This book served as an excellent introduction to Islam and has increased my desire to learn more about it. Mr. Makiya please write more!
Trustpilot
Copyright © 2022 Thriftbooks.com Terms of Use | Privacy Policy | Do Not Sell or Share My Personal Information | Accessibility Statement
ThriftBooks® and the ThriftBooks® logo are registered trademarks of Thrift Books Global, LLC