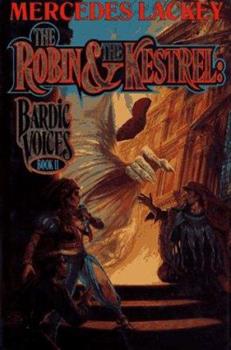 The Robin and the Kestrel: Bardic Voices II

(Book #2 in the Bardic Voices Series)

For the first time in paperback, a new solo novel by a fantasy great. Set in the same world as Bardic Voices, Book I: The Lark and the Wren, this fantasy novel is "deft and readable . . . as lively as one might wish, and the reappearances of the Skull Hill Ghost from The Lark and the Wren are especially well-rendered" (Dragon).

the Robin and the Kestrel:Bardic Voices II

Published by Thriftbooks.com User , 13 years ago
Mercedes Lackey never fails to entrance her readers. The Robin and the Kestrel: Bardic Voices II is another of her successes.

The Robin and the Kestrel: Bardic Voices II

Published by Thriftbooks.com User , 14 years ago
A wonderful follow-up to her earlier book in this series. It flowed well and told an excellent story. I also got book III and find it quite good as well. Joe

Published by Thriftbooks.com User , 20 years ago
The Lark and the Wren left a slightly bitter taste in my mouth. It was a *good* book, but truely lacked in several elements. It's sequel, the Robin and the Kestrel seems to have picked up some of the pieces to produce an interesting novel.The main characters are developed nicely, and for the first time, I didn't find myself groaning at the idiocy of either of the leads. The 'enemies' though, made me wince a little because of their resemblance to cardboard cutouts. While we do hear a little about the antagonists past, it's hardly enough to satisfy a curious reader.A small annoyance for me, was also the 'fade to black' scenes. It's wonderful that the leads have such an intimate relationship, but it doesn't need to be mentioned every night if the author won't follow up with a scene. Finally, this book does seem to bash a modern religion a little, but most shouldn't take offense, because it also provides some sympathetic characters from identical beliefs.All in all, Mercedes Lackey is a wonderful writer, and while I feel a bit generous about giving this book four stars, her unique style helps ease the decision a little.

A continuing saga of the Free Bards

Published by Thriftbooks.com User , 20 years ago
This is a tale of free bards, gypsies, non-humans, evil priests, and magic. It is book two of the series, and both continues characters from the previous book and introduces new characters that reappear in later books. The series should be read in order. The book begins with Free Bard Kestrel (a.k.a. Jonny Brede) and his wife, the gypsy Robin (a.k.a. Gwyna), traveling from Birnam in a gypsy wagon. The first half of the book takes them through a series of adventures that lead them to Gradford. The second half deals with events in Gradford, including the attempt of an evil priest to take over the city as a dictator (one can recognize the usual historical process of scapegoats, strong-arm police, a charismatic leader, etc.). It describes the strategies used by the general population to survive during such a reign, and has an eventual confrontation between good and evil. Overall, it is an entertaining book that holds your interest.

Published by Thriftbooks.com User , 22 years ago
This book is my favorite one in the bardic series. Although I enjoyed Rune's story, and also liked Nightingale, I love Robin and Kestrel. They are such an awesome couple, and are good at fighting 'old time crime' if you will. Although the bad guys were a little steryotypical and easily defeated, that is the way short novels work when you don't continue them into a series. I suggest that everyone read it, and if you like it, buy it!
Trustpilot
Copyright © 2022 Thriftbooks.com Terms of Use | Privacy Policy | Do Not Sell My Personal Information | Accessibility Statement
ThriftBooks® and the ThriftBooks® logo are registered trademarks of Thrift Books Global, LLC