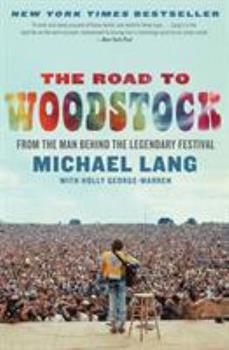 The Road to Woodstock

" A] vivid and lively account of those hectic and historic three days....The best fly-on-the-wall account, tantamount to having had a backstage pass to an iconic event."-- New York Post Celebrate the 50th Anniversary of Woodstock with the definitive book on the festival. The Woodstock music festival of 1969 is an American cultural touchstone, and no book captures the sights, sounds, and behind-the-scenes machinations of the historic gathering better...

Published by Sarina , 1 year ago
I have not received this book.

It happened-thats all that matters.

Published by Thriftbooks.com User , 11 years ago
michael's laid back philosophy of life is firmly entrenched in this book. this does not mean he was lazy or anything like that. he worked himself and everyone around him nearly to death putting on this festival. the laid back philosophy refers to his comments when things were obviously not going the way he planned,eg., several hundred thousand more kids showing up than he expected he just said "it's enough that its happening". this book really gets down to the nuts and bolts of putting on a concert of this magnitude, the problems involved with city,state governments,the logistics were enough to overwhelm anyone. he was just fortunate to have some very dedicated and hardworking people around him that were just as dedicated to putting this thing on as he was. this book is well laid out,has some wonderful quotes by the promoters,artists and just plain folks who attended this wonderful three days of "peace,love and music". it also has several archival pictures which are very interesting. all in all a very informative and well written and great read!

You'll enjoy reading as each layer of the onion is revealed

Published by Thriftbooks.com User , 12 years ago
If you ever watched the Woodstock film then you'll remember seeing the young, curly haired man on the motorcycle being interviewed about founding the Woodstock festival. That young man is Michael Lang. He was a bit shy and reserved when being interviewed on camera. Always with a perpetual smile, and keeping everyone around him at ease during the time of that fest. This book was written by Michael and it gives us all of the inside information about the formation of the festival, from it's original concept to the actual show that transpired on August 15-16-17 1969. I love the way Michael tells the story and inserts recollections from each of the behind the scenes collaborators who helped manage Woodstock. It gives the reader a new perspective at how difficult a festival of that size can be, and what an amazing job they all did to make it a reality. What folks forget these days is the fact that back in 1969, rock music was strictly underground. We had no MTV, or even any of the magazines or satellite radio stations we have today. There were no cell phones, no MP3 players, no internet and computers. This was from the early stages of pop culture as we know it today. Michael and his friends and business partners had to convince the residents and politicians in upstate NY to allow a vast collection of young people to converge on their property for a weekend during the best vacation time of the year in that region. It wasn't an easy sell for Michael & company. Michael also had to deal with contract agreements from a huge variety of artists, as well as securing all of the accessories that come with an outdoor festival (food-water-toilet facilities-and security services from local and state police, as well as housing for the musicians and transport to and fro the festival site). Woodstock was initially a financial disaster, but after reading this one can see what an amazing job was done to make this epic festival happen. If you love reading about the actual formation of a historic event, this book is a must read. Or if you just love the music and occurrences of Woodstock and want to know what happened behind the scenes, here's your ticket. I also cheers me to know that Michael Lang is still that curly haired hippy @ 65 years of age, and is still actively involved with festival events.

What a Great Road - peace and music and Michael Lang

Published by Thriftbooks.com User , 12 years ago
I read this entire book aloud in the car to my wife while she drove us to work and back. In all - about 2 weeks time; one chapater in the morning and one on the way home. We loved it. Author Michael Lang took us to Woodstock and we were utterly stunned to find out about the chance meetings, the kistmet, the karma, and his konnections. We especially liked his earlier, pre-Woodstock like - the fest in Florida he did, growing up in New York - his connections with people along the way to Bethel are fascinating. Besides the fest itslelf and the stories of the acts who played, what comes across is Lang's belief that good always prevails, things will work out, and when in challenging situations - people, when left on their own, will help others. The build-up to the fest and site logistics were excrutiating and tense. If you are going to read one book about Woodstock - this one is it. The author was the guy who planned and it and put it on and shepparded the flock of supporters, volunteers, and financiers. Thank you Michael for writing this book. I cannot give it any higher recommendation.

Published by Thriftbooks.com User , 12 years ago
In a book like this, "THE ROAD TO WOODSTOCK" all that really matters is that it is a fun read. Whether or not it completely accurate is beside the point because after all if a poll were taken now, 40 years later you could well find several million people who will swear they were there/ Why? Maybe it is that sixties nostalgia that people now in their late fifties and early sixties - for the most part - want to believe they didn't miss one of the major events in their lifetime. Honestly, I wasn't there and even though I am now sixty, I admit I am glad I was not there, mainly because no one would believe me if I did say I was there. What I do have is a ticket to the three day event that is one of my prized possessions and one I will never part with. Unfortunately at the last minute the employer I worked for at the time (I was trying to save enough for the next semester at college) cancelled my vacation and insisted I work the weekend or don't bother coming back. Maybe I should have balked, but as they say water under the bridge. What I do remember about Woodstock, and this book and many others have retold it over and over is that it was, despite the terrible weather, insane crowds, lack of food, medical services and sanitation, it all came off without any crime at all. Think about it, when have a half million people gathered under unexpected circumstances and everyone acted civilly. No rapes, no murders, no beatings and no theft. It is completely unbelievable but at the same time it says something absolutley amazing about that (my) generation, especially considering the social upheavals going on all around the world at that time. At the center of the SIXTIES, it was phenomenal, and shows something very positive can still come out of difficult times. It was a pleasure to read, and contains no political tirades or hate hate speak from the right or left, and that alone makes it worthwhile. Highly recommended summer read

Published by Thriftbooks.com User , 12 years ago
This book is like a time machine which transports you back to an era of great social upheaval and change. Woodstock gave our generation a much needed ray of sunshine. "The Road to Woodstock" is such a fun read that it's difficult to put down. Having many of the musicians reminisce about their experiences at Woodstock gives this book a timeless feel, like it happened only yesterday. For young people, who weren't even born yet, this book will show them why Woodstock mattered well beyond just being a music festival and that their parents and grandparents did make a difference.

The Road to Woodstock Mentions in Our Blog 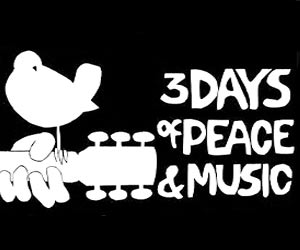