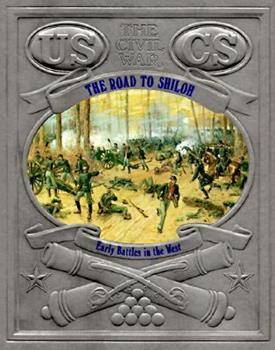 The Road to Shiloh: Early Battles in the West

(Book #4 in the The Civil War Series)

Road to Shiloh, The: Early Battles in the West by Nevin, David et al. This description may be from another edition of this product.

Published by Thriftbooks.com User , 21 years ago
Although the battles of the Army of the Potomac in the Eastern Theater garner most of the historical interest, the battles in the West were arguably more significant. In "The Road to Shiloh: Early Battles in the West," David Nevin and the Editors of Time-Life Books cover General Ulysses Grant's campaign in Tennessee in 1861-62. Chapter 1, "The Struggle for Missouri," covers the Battle of Wilson's Creek that proved pivotal for the control of this border state. Chapter 2, "The Go-ahead General," details the path by which Grant came to command the Union Army in the West (including that infamous photo of Grant with a fully cultivated square-cut beard). Chapter 3, "Clash at Fort Donelson," relates how Grant followed up his successfully attack on Fort Henry with an attack that would give the Federals control of the Cumberland River. Chapter 4, "The Devil's Own Day," covers the first day of the Battle of Shiloh, in which the Union army was almost routed one of the bloodiest days of the war; this chapter includes Theophile Poilpot's 400 foot long panoramic painting of the battle for the Hornet's Nest. Chapter 5, "An Incomplete Victory," tells how Grant and Sherman defeated Johnston's Confederate Army. Like all of the volumes in the Time-Life Civil War series, "The Road to Shiloh" provides dozens of contemporary illustrations, photographs, paintings, and the like. My one complaint is that if you read these volumes a lot, and it is hard not to, they tend to fall apart. The cover ends up being a nice gray folder. The rest of Grant's Western Campaign including the siege of Vicksburg is covered in the volume "War on the Mississippi."

Good, basic history of the western Army and Navy battles

Published by Thriftbooks.com User , 23 years ago
Time-Life always does a solid job. Great illustrations, readable text, a little short on detail but always entertaining and educational. A good introduction to the early Western actions on the Mississippi, Tennessee, and Cumberland Rivers.
Trustpilot
Copyright © 2022 Thriftbooks.com Terms of Use | Privacy Policy | Do Not Sell or Share My Personal Information | Accessibility Statement
ThriftBooks® and the ThriftBooks® logo are registered trademarks of Thrift Books Global, LLC