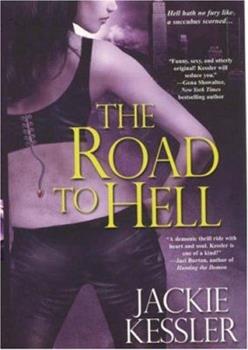 The Road to Hell (Hell on Earth, Book 2)

(Book #2 in the Hell on Earth Series)

Jesse Harris may no longer be a soul-stealing succubus, but she's got a Hell of a past. She'd love to come clean to her sweet, super-hot boyfriend Paul, but how exactly does a girl start that... This description may be from another edition of this product.

This sequel is awesome

Published by Thriftbooks.com User , 14 years ago
Jackie Kessler's sequel to Hell's Belles reveals that she's improved her already astounding craft. The basis for Jesse's motivations was so interesting and appealing in the first of this series that I was concerned about what would happen next. Would it be as compelling a read? Would I still admire the main character, Jesse, while wishing to be as fun and seductive as she is? The answer is yes. Jesse isn't some noble, goody-goody. She looks out for herself and is very independent. But when her lover and her friend need her, she pulls through and kicks some serious butt. I very much relate to Jesse. I love the whole Heaven-Hell premise that has placed Jesse (aka former succubus Jezebel) on the path of good (and naughty fun) while carting around a soul. I ripped through this book like a whirlwind, just as I did with Hell's Belles. I'm very much looking forward to the third in the series which will be released in the summer.

Published by Thriftbooks.com User , 14 years ago
There are enough 4 & 5 star reviews here, other than HK's, that I don't need to go into a recap of book except to agree that it is a wonderful sequel to book 1, deserving of a 5 star rating and I am looking forward books 3,4 5, 6 etc. This ha sthe makings for a long lived series. Bring it on Jackie, faster :-) Caution: Don't read Book 2 before reading Book 1, Hells Belles.

Published by Thriftbooks.com User , 14 years ago
Courtesy of CK2S Kwips and Kritiques Former succubus, now human with a soul, Jesse is settling into her mortal life with her new love, Paul. She has the perfect job for a former seducer demon - she's an exotic dancer - and is madly in love with Paul. But life is far from simple. Alecto the Fury comes to Jesse, begging her to return to hell to rescue Megaera, Alecto's sister Fury and best friend of Jesse in her succubus life. Incubus Daun wants Jesse to return to Hell so they can continue their former torrid sexual affair. Lilith, former Seducer queen, now assigned nightmare duty, has not forgiven Jesse/Jezebel for shooting her with iron bullets in their last encounter and vows to get revenge, using Paul's soul as leverage. Then there is Angel, the wannabe Seraphim. All Angel ever desired was to be a member of the heavenly Choir. Now she has been forced to work as a succubus by the new King of Hell, who is nothing like Lucifer, and is turning things upside down. Jesse has taken Angel under her wing to teach her the sensual arts. What's a former demon to do? I got such a kick out of Jackie's first book, Hell's Belles, that I was not about to pass up an opportunity to read The Road to Hell. Jesse is back with just as much spunk and sass as she had the first time we met her. You have to love her wicked (in every sense of the word) sense of humor. She is, naturally, a very passionate woman and the depth of her love for Paul surprises even her. She's always been very compassionate, which put a damper on her fiendish duties in her time as a demon. Now that's she's gained a heart and soul, that compassion is even stronger and has a tendency to get her into trouble. Jesse is one of the most fascinating characters I've come across in a long time and I thoroughly enjoy her escapades. As with Hell's Belles, we meet all manner of supernatural creatures in The Road to Hell, even adding a few new ones into the mix. This time while meeting still more demons, we also get to see angels, archangels, Furies, Dwarves, lost souls, and all manner of nasty creatures making Hell their home. We even get to visit with a witch and a Goddess between the covers of this delightful book. Every fan of paranormal romance will find some reason to love The Road to Hell. Of course, being a former succubus, Jesse has a very healthy sexual appetite so be prepared for some sizzling love scenes. There are only a few of them since Jesse is too busy to "get busy" much, but don't let that fool you. The tension is blazing hot, putting even put the Lake of Fire to shame. As the title, The Road to Hell, indicates, much of this book takes place in the underworld. One of the best quirks about this series is the complete role reversal of good and evil in Jesse's mind. Our visit to the Netherworld provides ample opportunity for us to see that attitude come into play. It also was interesting to revisit the Kingdom of Hell and see all of the changes the new king has instituted. I know th

Published by Thriftbooks.com User , 14 years ago
THE ROAD TO HELL is newbie author Jackie Kessler's second foray into the paranormal romance field that's just burgeoning with vampires, werewolves, witches, and other supernatural things. Kessler has played a trump card that's going to be hard to beat. Her heroine, known in the mortal world - translation, our world, as Jesse Harris was actually a demon named Jezebel. From Hell. Yep, Hell - with a capital H. For four thousand years. The story of how she became human - well, mostly - is told in the first novel, HELL'S BELLES. This one just came out and people should know it's out there. I've read both books. Couldn't help myself. The devil - or, at least, Jesse - made me do it. In the mortal world, Jesse's main squeeze is vice detective Paul Hamilton, who has no clue about Jesse's otherworldly origins. To him, she's the most wonderful woman he's ever known. Except for that little faux pas she has of being a stripper at a gentlemen's club. And trust me, the gentlemen at that club don't exactly act gentlemanly, as the opening pages of the novel reveal. And Jesse hasn't forgotten she was once a succubus of seduction. She enjoys sex in all forms. Stripping just kind of takes the edge off of no longer being a practicing demon. Or maybe it builds her appetite for when Paul comes home. After reading the books, I think it's probably a mixture of both. What I can tell you with all certainty is that Kessler has created a spunky, foul-mouthed, straight-shooting, character that still maintains an endearing innocence even after four thousand years of sin. Jesse/Jezebel is a hoot. I should be ashamed for enjoying her ribald adventures so thoroughly. Probably I am. But Jesse (and Kessler) is a supreme provocateur and seductress. I claim being bespelled as my defense. Kessler's prose and pacing are engrossing. Readers aren't going to be able to pick her books up and read casually. They're going to be hooked by the cleverness, whipped into a frenzy by the blatant eroticism and honesty, and left in a lather when the last page of a book is turned. She reads like an old hand. She admits on her website to enjoying comic books and writing fan fiction. Still, you can sharpen your craft there, but Kessler writes like she's been through the finishing school for fiction writers. Perhaps some of the characters don't come across on the page as strongly as they might, but there's no need. With Kessler holding the reins and the novel bolting like a thoroughbred with its tail on fire, you're simply not going to have time to give them that kind of consideration. They work. They have problems, goals, dreams, and desires (most of them sinful or sexual, of course). And Jesse/Jezebel is a honest and appealing (in oh-so-many ways), that anyone who is even modestly intrigued by this kind of fiction is going to be swept away and dropkicked into a functionally realized world that makes its own macabre sense. The mythology, the way she redeemed demons

Even better than the first

Published by Thriftbooks.com User , 14 years ago
Kessler's latest entry in the paranormal romance field is distinctive and insightful. Her exploration of the hierarchy of Hell is interesting and gripping. The message that there is no "black" or "white" -- just shades of gray -- is not as simple as it sounds. And when Angels are taking over Succubi duties, and Duanuan is back to his old tricks, count me in. I enjoyed this book from first page to last -- it's not a typical paranormal romance. Delving into the concepts of good vs. evil, angel vs. demon, and Archangel vs. Fury, Kessler's writing is interesting and thought-provoking without being preachy or cloying. Oh yeah, and lots of great, sexy scenes. Count me in for book 3, "Hotter than Hell," in April 2008!
Trustpilot
Copyright © 2022 Thriftbooks.com Terms of Use | Privacy Policy | Do Not Sell My Personal Information | Accessibility Statement
ThriftBooks® and the ThriftBooks® logo are registered trademarks of Thrift Books Global, LLC