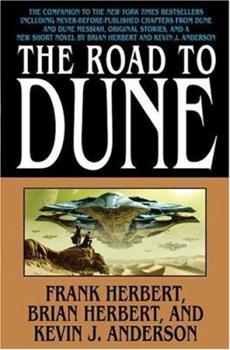 The Road to Dune

Including never-before-published chapters from Dune and Dune Messiah, original stories, and a new short novel by Brian Herbert and Kevin J. Anderson Frank Herbert's Dune is widely known as the science fiction equivalent of The Lord of the Rings , and The Road to Dune is a companion work comparable to The Silmarillion , shedding light on and following the remarkable development of the bestselling science fiction novel of all time. Herein, the world's...

Published by Thriftbooks.com User , 12 years ago
A treasure trove! Amazing historical stuff from the archives of Frank Herbert, letters, rejection slips, missing chapters, alternate endings. Plus the collected Dune short stories written by Brian and Kevin. I particularly enjoyed the unorthodox collaboration of "Spice Planet" -- a science fiction adventure story that Frank Herbert had outline, a prototype version of DUNE. Something in this book for all Dune fans.

Published by Thriftbooks.com User , 14 years ago
I must admit that I'm not even CLOSE to finishing this fine book but what I have read of it I do like. Brian has taken up the mantle of his famous father and been able to cope with the inevitable comparisons between the two styles of writing. Both are fine authors in their own right, I recommend any of these books in the continuing Dune universe.

A Treasure in Several Ways

Published by Thriftbooks.com User , 14 years ago
I'll leave it to the die hard Dune fans to explain all of the details of what's inside this fascinating volume. I just want to point out three things: 1) Even if you're not a die-hard Dune fan, but at least interested in the history of science fiction, you'll enjoy the book because it details some of the early development of the Dune novel as well as presents a complete novel based on Frank Herbert's original notes. 2) The "new" novel is actually very good, although I am sure some die-hard Dune fans will not like it because it lacks so many of the details - especially about religion - that are present in Dune. Still, I enjoyed the story because it sounded so much like a story from its time. In other words, in itself, it was an enjoyable novel, but it also contrasted dramatically the old style of science fiction with the newer style used by Herbert. The newer style was the complete realization of a different world, culture and environment with almost every detail worked out. The old style was from a time when the publishers simply didn't have the money to allow such massive detail into a novel. Publishers could more easily handle a 200 page sci-fi novel than the massive novel Herbert actually completed. 3) Through the 'new' novel you'll learn some interesting details about the origins of the worms, the huge inter-connected series of tunnels under the surface of dune, etc. Just those details makes the effort of reading the 'new' novel worthwhile!

Published by Thriftbooks.com User , 15 years ago
THE ROAD TO DUNE has rekindled my enthusiasm for the series BIG TIME. I read the short novel about "Duneworld" with reluctance, but I found I enjoyed it. It gave me a view of what a "more-conventional" (ie more readily marketable) DUNE would have been like. The letters back and forth were very interesting (Harlan Ellison calling Herbert 'fuzz-face' was hilarious). And the short story "A Whisper Of Caladan Seas" almost brought a tear to me eye... This is obviously not a biography of the late Frank Herbert's life when he was writing and trying to sell DUNE. It's a collection of stories, letters, and deleted/alternate passages. I thought I wouldn't like it (I never finished UNFINISHED TALES, for example), but it helps provide more of a backstory to the original DUNE and DUNE MESSIAH. A lot of the reviewers here state that the prequels by B.Herbert/K.Anderson didn't measure up to the original series. I ask: what could? The original was The Science Fiction Masterpiece. Even it's OWN sequels by Frank Herbert never really measured up. Would you rather we DIDN'T have anymore Dune adventures at all? The ones I'M waiting for are the post-Chapterhouse: Dune adventures... which are finally being written! HUNTERS OF DUNE, SANDWORMS OF DUNE, and PAUL OF DUNE! About BLOODY time!

A perfect addition to the DUNE library

Published by Thriftbooks.com User , 16 years ago
It's time for the last few grouchy holdouts to wake up and smell the melange. This book is a perfect mix of new material by Brian Herbert and Kevin J. Anderson and original chapters by Frank Herbert, which were deleted from DUNE and DUNE MESSIAH. "Spice Planet" is a fascinating alternate version of the Dune story from Frank Herbert's original outline, and the short stories fill in gaps between some of the prequels. Before he died, Frank Herbert asked his son Brian to write DUNE novels with him and passed the candle. He left thousands of pages of notes. Frank Herbert meant for these books to be written. For those of you who keep whining, it's time to get your head out of the sand. These books are good!
Copyright © 2020 Thriftbooks.com Terms of Use | Privacy Policy | Do Not Sell My Personal Information | Accessibility Statement
ThriftBooks® and the ThriftBooks® logo are registered trademarks of Thrift Books Global, LLC