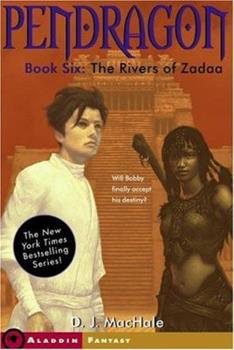 The Rivers of Zadaa, 6

(Book #6 in the Pendragon Series)

THE BATTLE CONTINUES. The struggle of good versus evil continues as Bobby Pendragon follows Saint Dane to the territory of Zadaa. Saint Dane's influence has fueled the fire of discontent between two warring tribes: the Rokador and the Batu. This is also the territory where the Traveler Loor lives as a member of the Batu. Together she and Bobby must work to thwart Saint Dane's efforts to destroy Zadaa. But as Bobby pursues Saint Dane, he begins to...

Published by Thriftbooks.com User , 16 years ago
My 11-year old daughter wanted me to read the first Pendragon book when she finished it. I've now purchased and read all of them and have recommended this series to many friends. All of the books are complex and interesting stories that, unlike many books aimed at this age group, manage to avoid adult situations and language. At the same time, there are important themes in the books that are excellent conversation topics with young teens because Bobby Pendragon and his friends are faced with situations where right and wrong are not clearly defined and where they have to deal with the consequences of the mistakes that they make. Highly recommended for 10-14 year olds, although younger ones would need to be good readers.

An Amazing and Fun Read!

Published by Thriftbooks.com User , 16 years ago
Ignore "School Library Journal's" totally untrue and blatant review. "The Rivers of Zadaa" delivers. MacHale once again had me on the edge of my seat in this new volume with suspense, action, drama ... and a little bit of romance. Bobby Pendragon is on Loor's home territory of Zadaa where two enemy tribes, the Batu and the Rokador, are on the brink of war due to a devastating drought. It is unclear to Bobby whether Saint Dane tinkered with Zadaa's turning point or whether the war was really meant to be. The "Library Journal" was right about one thing and that's Bobby matures as a character in this volume. Bobby isn't a character who uses fancy speech; he's walks, talks, and acts just like you and me and that's what makes the Pendragon series so enjoyable is the talent that MacHale has to fuse reality with fantasy and make his characters relatable to every kid out there. This popular and just plain fun series got so much more exciting after this volume and it opened so much more mysterious questions (along with some amazing discoveries about the traveler's powers). I for one cannot wait for book seven; The Quillian Games!

A Great Book, With A New Twist

Published by Thriftbooks.com User , 16 years ago
This is a great book, as good as, if not better than, the first 5 books (I finished this book in 5 hours). As the 6th book in one of the best series I've ever read, I highly recommend this book to people who like fantasy genre, or who just like to read. There's also a surprising new twist in this book for people who are already Pendragon fans, one that you really don't want to miss, along with an interesting ending. A must-have, must-read book, the only downside being that Loor and Bobby on the cover don't look as good as I thought they would, and the cover still looks really cool :D.

Published by Thriftbooks.com User , 16 years ago
This book was as amazing as, if not more, than the past 5 books (I have not read the complete guide to the territories... but it's something i now want very badly!!)I could literally NOT STOP READING. I finished it in a day, reading from 6 PM to 2 AM. This book was thrilling and kept me at the edge of my seat. Even though I could predict the plot (as in, guessing what was going to happen in the next scene before it happened), MacHale still kept my hooked with his riveting descriptions and insightful views and feelings from Bobby. The (like always) cliffhanger ending keeps me yearning for more. YOU SHOULD REALLY READ THIS BOOK!!!
Copyright © 2020 Thriftbooks.com Terms of Use | Privacy Policy | Do Not Sell My Personal Information | Accessibility Statement
ThriftBooks® and the ThriftBooks® logo are registered trademarks of Thrift Books Global, LLC