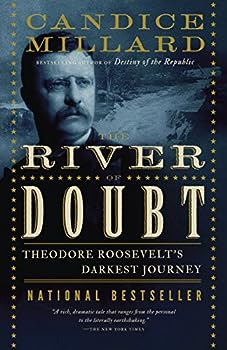 At once an incredible adventure narrative and a penetrating biographical portrait, The River of Doubt is the true story of Theodore Roosevelt's harrowing exploration of one of the most dangerous... This description may be from another edition of this product.

It was just OK

Published by Jordan , 2 months ago
I liked the book, partially. I liked how the author talked about the journey and what went on during it and what they had to deal with. Ok, now that the good is out of the way, the bad. Multiple times I wanted to set this book down. The author almost constantly goes into tangents about the animals of the jungle, the plants, and anything else she seems to think would be out there even though it isn't mentioned throughout the book by one of the people on the journey. If you are hoping to learn some educational stuff while reading about a Roosevelt expedition through the jungle in 1914, then this book is for you. If you are wanting to read about their journey and diary entries, this book is really not for you, nor me either. Multiple chapters started with them waking up and having to go back down the river, but only for a few paragraphs, then it would cut to the author talking about snakes or mosquitos or something that they had to deal with without saying that one of the people in the trip wrote about it in a diary or anything. After about 90% of the chapter talking about what the author wanted to share, it would finally go back to them and them setting up camp for the night. To me, this book could have been closer to around 250 pages, and even that is some grace with how big it could have been. The journey of him starting at the beginning of the river doesn't start until around 100 pages, and it seemed toward the end of their expedition the author rushed writing it, you would think that would be the most important/best part, but no, just roughly a chapter from the time they got down the rough rapids and left, didn't really even mention what they did between then just about the people they met toward the end of the river. This book was not worth what I paid for it on Amazon. I have read 'The Captains Dog' and absolutely loved the way that author brought you through the Lewis and Clark Expedition from the dog's perspective and how they made you feel like you were in the wilderness with them, this book, sadly did not do that.
Published by Thriftbooks.com User , 6 years ago
Engaging story of Roosevelt's exploration of an Amazon tributary, under the guidance of Brazilian Colonel Rondon. Have you ever started a book and thought, "This is going to end in disaster"? That was my first impression. Truly a tale of survival and determination.

Published by Thriftbooks.com User , 16 years ago
Candice Millard tells the riveting true story of an obscure event in the sprawling life of Theodore Roosevelt. Had this story been a work of fiction, it would have seemed less believable than a made-for-television melodrama. But fiction it is not; it is fact, more thrilling than fiction. Millard's meticulous attention to detail, coupled with her page-turning writing style offers the reader a story hard to put down. Add to that the fame of the leading character, the father-son connection, the multiplied harrowing situations, and you have an adventure tale of epic proportion. It's hard to fathom that this month-long death march was so unknown, until now. Though certainly not "preachy," Millard's accounting conveys a clear message of indefatigable courage. The River of Doubt became for Roosevelt, his adult son, and their traveling companions, a torrent of hope. Their darkest journey converted into the light of perseverance, sacrifice, team-work, and survival. Reviewer: Bob Kellemen, Ph.D., is the author of "Soul Physicians," "Spiritual Friends," and "Beyond the Suffering: Embracing the Legacy of African American Soul Care and Spiritual Direction."
Trustpilot
Copyright © 2022 Thriftbooks.com Terms of Use | Privacy Policy | Do Not Sell or Share My Personal Information | Accessibility Statement
ThriftBooks® and the ThriftBooks® logo are registered trademarks of Thrift Books Global, LLC