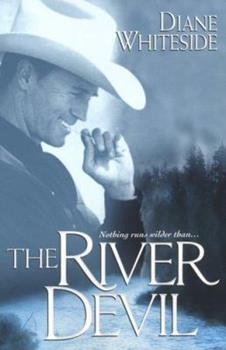 Decorated Union Navy hero and riverboat captain Hal Lindsay, determined never to marry, finds his vow of bachelorhood challenged by New York railroad heiress Rosalind Schuyler who, disguising herself as a gambler, is hiding out on his boat to escape from an arranged marriage. Original.

Published by Thriftbooks.com User , 16 years ago
The River Devil by Diane Whiteside takes you to life and times on the mighty rivers after the Civil War. Hal Lindsey is his own man, his love of the river shines through via his boat the Cherokee Belle. Hal has vowed to never marry or to have children after the way he and his sisters were raised. Hal had met Rosalind Schuler before she disappeared but now she is at a high stack poker game dresses as a man. This woman intrigues him greatly. Rosalind is running for her life. After the death of her father, she is trying to outrun an unscrupulous man who wants her inheritance. If she can stay hidden just a few more months the money is hers. She takes to the gambling cities off the river disguised as a man. Only Hal figures out her disguise and takes her in as a cub trainee on his boat to protect her. But he also wants to continue their affair. As they travel the byways and rivers across the country their affair deepens. The danger continues to follow them and even targets his family. The River Devil is a mesmerizing book. The glory of river travel sparkles and draws you in to days gone by. Hal and Rosalind have one of the most tantalizing and compelling relationships, which is deeply sensual as it is intellectual. It was great to revisit Viola (Hal's sister) and William Donovan from The Irish Devil. I really hope Morgan Evans gets his own tale soon.

Another excellent story by Diane Whiteside!

Published by Thriftbooks.com User , 16 years ago
Successful riverboat captain Hal Lindsay is quite surprised to look across the poker table and into the eyes of railroad heiress Rosalind Schuyler, especially since she is disguised as a man. Rosalind is running from a marriage to a truly evil man whose plan to marry her will be immediately followed by a plan to kill her to get his hands on a significant inheritance. She is terrified when Hal discovers her true identity for fear that he will let the truth slip. Hal has no intention of exposing Rosalind. He finds her fascinating and would rather keep her under his protection, in masculine disguise in pubic, with the pretense of her being in his employ as his cub. She will be with him every hour of every day, even bunking in his stateroom without any questions. As the two of them spend time together, passions explode and Rosalind finds herself falling in love with Hal. Hal likes to have a good time with a woman, any woman, but compared to the feminine warmth that he has found with Rosalind, those interludes are cold and meaningless. He does not care for the feelings that Rosalind arouses in him when they are alone together. Hal had a dark, violent childhood and fears that he may have inherited his father's taste for violence; he has vowed to never marry and father children. Rosalind, on the other hand, dreams of a loving husband and children. Hal and Rosalind are the sort of characters that historical romance readers long for. They are well suited, despite the refusal of either to act upon their dreams of more than a brief,erotic, sexual affair. The secondary characters of Hal's adorable sister and her loving husband are a target; their very presence a virtual bright spot and a wonderful compliment to Hal and Rosalind. Hal is one of the most sensual heroes ever written. He is smooth and polished, always hiding the physical and emotional scars of his vicious childhood. Rosalind is a sophisticated woman, tall, beautiful and full-bodied. Evil characters are ruthlessly so, with Ms. Whiteside deciding in the end who amongst them is redeemable and who is not. This book is a must-read for lovers of well-written historical romance. Courtesy Laurie/Romance Junkies.

Published by Thriftbooks.com User , 16 years ago
In December 1871 in New York Nicholas Lennox will do anything including kill to insure he controls the wealth of Rosalind Schuyler though he plans to marry her first. A stipulation in her inheritance insists that if she marries in the next fifteen months she loses control of her money. To avoid that fate especially with the dangerous Nicholas, Rosalind flees west hoping to hide until she can claim her wealth without any proviso. To hide in plain sight, Rosalind dresses like a man, but Nicholas seems to be closing in on her. At a poker game, she meets Mississippi-Missouri riverboat captain Hal Lindsey. She is attracted to him but fears revealing her gender; he knows that "he" is a she and he needs to learn why because he wants her too. Diane Whiteside's latest devilish tale, THE RIVER DEVIL, is a terrific historical romance that stars two likable lead protagonists, a vile villain, and the rivers with their riverboats. The story line cleverly meanders like the rivers that flow throughout the descriptive plot. However, the cast makes this a fine novel as readers will root for Nicholas and Rosalind (perfect name for a woman disguised as a man) and appreciate the return of the stars of THE IRISH DEVIL in a secondary role. Harriet Klausner
Copyright © 2022 Thriftbooks.com Terms of Use | Privacy Policy | Do Not Sell My Personal Information | Accessibility Statement
ThriftBooks® and the ThriftBooks® logo are registered trademarks of Thrift Books Global, LLC