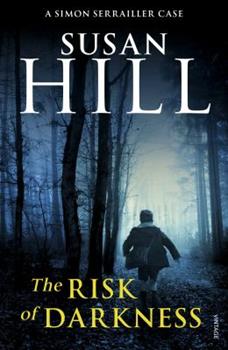 (Book #3 in the Simon Serrailler Series)

This description may be from another edition of this product. We met Simon Serrailler first in The Various Haunts of Men and got to know him better in The Pure in Heart. Susan Hill's third crime novel, The Risk of Darkness-perhaps even more compulsive and...

A moving and provocative character study

Published by Thriftbooks.com User , 12 years ago
First, I want to mention that although I thoroughly love this book and the author of the one negative review hated it, I gave the review a helpful vote because the reviewer hits the nail on the head pointing out that it doesn't have a lot of action and suspense. Well, I thought it suspenseful because I cared so much for several of the characters and wanted happy resolutions to their stories, but I can see that this isn't for the typical action and suspense fan. Susan Hill strives to help us understand even the most odious characters and why they do what they do. There's "Ed", the kidnapper and killer. There's Max, indeed crazed by his grief and subsequent obsession over his dead wife. There's the Anglican priest Jane. And of course, there's the introvertive protagonist, inspector Simon Serrailer who is a quite complicated but sharply characterized person. You won't always like him or agree with his thoughts and actions, but he is a thoroughly memorable character. While I did read THE VARIOUS HAUNTS OF MEN, I haven't yet read the 2nd book, THE PURE IN HEART. Contradicting my early statement, I did find sufficient action and suspense in this, but it came from becoming first well acquainted with the main characters, and while I did think I understood Simon quite wel in the first novel, I discovered even more about him in this and therefore unabashadly give it five stars.

Susan Hill does it again

Published by Thriftbooks.com User , 12 years ago
Simon Serailler returns to help in a search for another child abducted from a small town out of his district. His pain as he works over the similarities to the David Angus disappearnce drives him relentlessly at the same time that family concerns are taking a toll on his emotions. As usual, the author does an outstanding job depicting the many sides of a complex detective's slogging through his daily search for a killer. Finding the abductor is only the beginning; then the question of "why?" turns several lives upside down. Can't wait for the fourth book.

The Risk of Darkness by Susan Hill

Published by Thriftbooks.com User , 12 years ago
THE RISK OF DARKNESS By Susan Hill The following contains some revelations about the plots of all three Simon Serrailler novels which might be considered spoilers. The Risk of Darkness is a book about life changes and how people respond to them. Although classified as a crime novel, it is much more than that. The crime and the criminal are a focal point around which other plots move, but crime is a plot device. This is not a who-done-it. The crime is the abduction and murder of children. The criminal, revealed early on in the book, is Edwina Sleightholme, who prefers to be called Ed, a complex character whose psychological makeup and motivation are not fully explored in this book, leaving this reader longing for more. The Risk of Darkness is the third in the Simon Serrailler series by Susan Hill. The series is a progression in time, meaning that the reader who has read the first two in the series will better understand references to the past in this, the third. There are several concurrent plot lines and themes in The Risk of Darkness. The exploration of how people respond to death is a central theme. Two deaths continue to haunt Simon: the death of Freya Graffham, a woman he was developing feelings for in the first book of the series, The Various Haunts of Men; and the death of his sister Martha, which took place in the second book, The Pure in Heart. These unresolved grievings have Simon feeling dissatisfaction with both his work and his personal life. Max Jameson's wife Lizzie dies an agonizing death. Max's grief drives him into insanity. Jane Fitzroy's mother is murdered, and Jane begins to question her own commitment to her position as an Anglican priest. The death of Lizzie Jameson and Max's plunge into insanity also factor into Jane's turmoil. Marilyn Angus responds to the death of her husband and the presumed death of her son David with a matter-of-factness approach to getting on with life, although this reaction crumbles in the end. Richard Serrailler, father to Cat and Simon, handles the death of his wife Meriel with a surface calmness. One suspects, however, that he is suppressing his grief and it will come to the fore at some point in the future. Other life changes are faced by characters in the book. Simon's sister, Cat, and her husband Chris contemplate a move to Australia as an antidote to Chris's dissatisfaction with his work as a doctor, what seems in his case to be a classic case of a mid-life crisis. Simon is contemplating changes in his life and in his career. He seems at a crossroads, not sure which way to turn. Simon is approaching his 37th birthday and so he too may be in the midst of a mid-life crisis. By the end of the book Ed has come to the realization that she will never again be free, and the reader is left wondering how she is going to deal with this realization. Three women are assaulted in the course of the book, and each woman deals with the aftereffects of the assault differently. Cat, also a docto

Published by Thriftbooks.com User , 12 years ago
Fans of Simon Serailler will appreciate this third book in the series, but new readers would appreciate this book better if they first read the two prior books in the series, i.e. "The Various Haunts of Men", and "The Pure in Heart". In this novel, police inspector Simon Serailler remains a complex character. Not only is he a police inspector, but also a practising artist. Though women are attracted to him, he is ambivalent towards them. He is however drawn in this book to a female Anglican priest, and it's interesting to read about this new story arc. "The Risk of Darkness" also continues a story arc from the second book, which centers around the disappearance of a schoolboy. Another missing child case sees Simon teaming up with another policeman, and when a young girl is kidnapped, the team goes all out to solve the cases. There are many things to appreciate in Susan Hill's novels - the quick pacing of the plot and compelling story arcs, the well-developed characters who never suffer from either over-characterization or being portrayed as cardboard cut-outs, and the myriad, complex themes brought forth in each novel. Highly recommended for mystery fans, especially for those who like a good British mystery.

"These are the ones that get to you."

Published by Thriftbooks.com User , 12 years ago
Important note: This novel should be read only after completing the first two in the series: "The Various Haunts of Men," and "The Pure in Heart." If you do otherwise, you will not understand the arc of the story or appreciate the development of the characters. In addition, the author reveals information that you would rather not know if you decide to go back to the beginning. In "The Risk of Darkness," thirty-seven year old DCI Simon Serrailler is suffering from mental exhaustion. He is bored, frustrated, and eager for a new challenge. Fortunately, his avocation, drawing, brings him great satisfaction. In fact, his work will soon be exhibited in a London art gallery. In addition, Simon derives enormous pleasure from spending time with his sister, Dr. Cat Deerborn, and her family. Since he has never formed any serious long-term attachments, he is beginning to wonder whether he will ever marry and have children of his own. Also haunting Simon is the lack of resolution in one particular case, the tragic disappearance of a schoolboy named David Angus eight months earlier. One day, DCS Jim Chapman, of North Riding CID, calls Simon asking for his assistance in finding another missing child, eight-year-old Scott Merriman, who vanished while he was on his way to his cousin's house. Simon joins forces with Chapman's team, but without forensic evidence and eyewitnesses, they have very little to go on. When a six-year-old girl is abducted, there is a witness, and at last the authorities dare to hope that they may catch the perpetrator. Another subplot deals with Max Jameson, whose beautiful wife, Lizzie, is dying from Variant Creutzfeld-Jakob (Mad Cow) Disease. Max, who is devastated by Lizzie's mental and physical deterioration, cannot face life without the woman he adores. Although Cat, who is Lizzie's doctor, tries to help Max prepare for what is to come, he is too heartbroken to take her well-intentioned advice. Eventually, his bottomless grief will have terrible consequences. Susan Hill's Simon Serrailler series is one of the most original, wrenching, and unforgettable of all the police procedurals to come out of England. In "The Risk of Darkness," the writing and dialogue are as sharp as ever, and the fast-paced narrative is mesmerizing. All of the characters are superbly delineated, from Simon and Cat to those who make only brief appearances. Simon has many admirable qualities: He is devoted to his sister and mother; he is a dedicated officer of the law; and he is a gifted artist. Unfortunately, he is also self-centered, reclusive, and cold towards those women unlucky enough to fall in love with him. An Anglican priest named Jane Fitzroy may change all of that. She is fiery, independent, and beautiful, and Simon is soon infatuated with her. Simon's sister, Cat, is altruistic and compassionate, but her husband, also a doctor, is suffering from burnout. His dissatisfaction is generating discord in a marriage that, until now, has been rock soli
Copyright © 2020 Thriftbooks.com Terms of Use | Privacy Policy | Do Not Sell My Personal Information | Accessibility Statement
ThriftBooks® and the ThriftBooks® logo are registered trademarks of Thrift Books Global, LLC