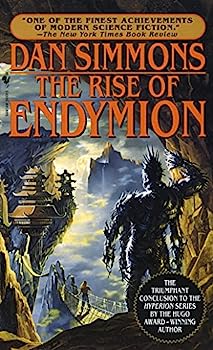 The Rise of Endymion (Hyperion)

(Book #4 in the Hyperion Cantos Series)

This description may be from another edition of this product. The magnificent conclusion to one of the greatest science fiction sagas of our time The time of reckoning has arrived. As a final genocidal Crusade threatens to enslave humanity forever, a new messiah...

Published by Thriftbooks.com User , 14 years ago
Have you ever experienced something so beautiful that you cried because of it? Read some novel that you became so immersed in that, after completing it, you felt lonely, even among friends, because you missed the characters so much? That experience was this story for me. I know a lot of people saw this as a story, a fictitious novel, but I saw it as something so much more. As a novel, it has its flaws (I suppose, upon reading other reviews on this site, although they were completely irrelevant for me) but as a STORY and a moving experience, it is nearly unparalleled. If you've read the Hyperion books and haven't read this (and its predecessor) then you absolutely must. If you haven't read the Hyperion books (which are masterpieces in their own right) then you must. These last two installments might not be as well-written (I still think they are) but they are absolutely breathtaking in their profound insight as to the importance of Love in the universe and how completely it can be felt and experienced. If you don't fall in love with Aenea during the reading of this story, then you musn't truly grasp the soul of it. This four-book series may be one of the most moving, heartfelt, well-written compilations that I've ever come across.

Published by Thriftbooks.com User , 17 years ago
Start with an appreciation of what Simmons is trying to do in this fourth book in the Hyperion Cantos:- He is finishing the story of a messiah-like heroine who has known from the day she was born the exact, gruesome manner, date and time of her death.- He is using - with full credit - the ideas of Tielhard de Chardin and John Keats and others, ideas and even writers of whom the majority of his readers are mostly unaware.- He is advocating the powers of humanity, and especially the power of love, over the powers of technology. In a science fiction novel.- He has chosen as one theme crucifixion: individual's crucifixion by the Shrike, humanity's crucifixion by the cruciform parasite, and Aenea's horrifying death. Crucifixion is at the heart of the West's most prominent religion.- Like any writer of a series, he is constrained by the myriad loose ends from the three earlier books.Simmons meets all of these challenges. He writes a suspenseful, emotionally engaging novel that takes all of these ideas and constraints and deals with them fairly, consistently and pretty completely.Not many writers have the wit and courage to attempt these ideas; only a fraction of those who have the wit and courage also have the talent to bring it off. Simmons not only makes the attempt; he mostly succeeds.The criticisms and negative reviews, it seems to me, stem from those who don't understand this is a novel of ideas, and those who give little credit to the breadth of what Simmons is trying to do. Aenea's final months and messy death is nothing less than a technologically rationalized replay of Christ's, recast and rethought in very impressive ways. Raul's rebirth is Saul's re-birth, isn't it?No, this isn't a sword and fur jockstrap story, or yet another "coming of age with a light saber" Hero's journey. This is a book that welcomes and rewards a thinking reader. I wish there were more examples in the genre.Well conceived, brilliantly written. Highly recommended.

The best conclusion I've ever read. Ever.

Published by Thriftbooks.com User , 19 years ago
After the dismal third installation of the series, I was a bit concerned, however impelled to read on. I'm very glad I did, because this final book is a celebration of everything that made the first two so great. It answers questions left untouched earlier (like, what in heavens is the Shrike?), and deepens your understanding of the universe that Simmons has painted. You will be surprised at what you learn -- maybe even uncomfortable (I was... the discussions of the Void Which Binds are profoundly creepy) -- and you will finally come to love the characters which bored you to tears in the previous book.A sci-fi series is a dangerous thing for a reader. It is very easy to fall in love with the world you've been visiting. And it is very easy for the author to ruin the whole thing in the closing move (I still wish I'd left the final Dune novel on the shelf... the last chapter all but ruins the whole damn series). But Simmons comes through like a champ, with a fitting, surprising, and flat-out wonderful finale. Please, with all your might, fight the urge to "peek" at the last page. As much as I loved the series, I did not expect to have the last sentence make me cry -- but I did. Yeah, I'm a goof.Read this book. Now.Go!

Published by Thriftbooks.com User , 19 years ago
Simply put, the Hyperion cantos is THE best sci-fi series I have read. And I've read a bunch. RoE is, like the other three books in the series (but perhaps not so much Endymion, which seemed like a huge build up to RoE) a masterpiece. I could really feel the love between Aenea and Raul, and somehow, despite the little voice in my head that kept saying, "This should be corny! This should be too sappy!" I never found it to be so. Simmons really makes you care about the characters, and when he writes in the first person (much of the novel is set in that viewpoint), you feel the emotion all the more. RoE is the only book EVER that has made me actually cry at the end. Aenea's fate is truly tragic and the reader can't help but feel sorry for Raul. But the characters are not stereotypical, they are not hackneyed, they are human and right, and that is what makes this book (and series) genius. This is my second reading, and I really felt that I had to write something about it. Maybe I just really get into the books I read, but the emotion at the end left me dazed for days--and from the other reader reviews I've read, I'm not alone. This book and the Hyperion series should be on everyone's shelf.

Published by Thriftbooks.com User , 20 years ago
This is one of the most powerful books I have ever read. It seems silly to say that about an SF novel -- but this book has affected me like only one other -- Dr. Zhivago by Boris Pasternak. I cried my way through the last 50 pages and after I put it down I couldn't sleep for hours. Mr Simmons' writing is so powerful, so poignant that the characters of Raul and Aenea have been burned into my literary memory forever. A teacher of mine once said that any book -- and life itself -- can be experienced at many levels of consciousness. The author has managed to encapsulate all of the incredible sadness, joy and beauty of being human into this book. The last 200 pages or so (from Chapter 25) is a prediction of where we are headed as a species, I believe, an expanded consciousness where every human is in effortless contact with every other. Mr. Simmons weaves a possible future based on the inherent power of LIFE -- not technology. He has conceived of a future -- correctly I believe -- where beings understand and use their true power. His handling of time is just brilliant and the ending is so poignant that I still get a lump in my throat thinking about it. One of the reviewers of this book said that it was predictable in some spots -- and I agree, having guessed the ending a few hundred pages from the end -- but it is a tribute to Dan Simmons that it made no difference. I was tugged along by the power of the story and I forgot all about my guesswork until the last sentence. I am sure that most people will find this review an over-reaction -- but I am understating the full range of my emotions as I write this. If any of you who read this have been so powerfully affected by this book and would like to share your thoughts, please e-mail me at kmaclean@ic.net.
Copyright © 2020 Thriftbooks.com Terms of Use | Privacy Policy | Do Not Sell My Personal Information | Accessibility Statement
ThriftBooks® and the ThriftBooks® logo are registered trademarks of Thrift Books Global, LLC