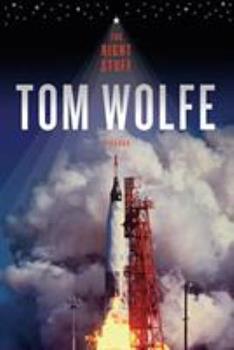 Tom Wolfe at his very best (The New York Times Book Review), The Right Stuff is the basis for the 1983 Oscar Award-winning film of the same name and the 8-part Disney+ TV mini-series. From America's nerviest journalist (Newsweek)--a breath-taking epic, a magnificent adventure story, and an investigation into the true heroism and courage of the first Americans to conquer space. Millions of words have poured forth about man's trip to the moon, but until...

The Right Stuff; the Right Edition

Published by Thriftbooks.com User , 16 years ago
This book was my introduction to Tom Wolfe - and what an introduction it was. The country was mired in a black hole. President Nixon had resigned the Office of the President in disgrace. There was the continuing debacle in Iran. The anti-hero was king. Who would have guessed a book about old-fashioned heroism could capture the public's attention? Yet that is exactly was Wolfe penned. Beginning with the early test pilots and then proceeding to NASA's Mercury program's assault on the final frontier - space. A tale of good, old-fashioned American heroism; a thought, which to many in 1979 that was foreign, or at best, long-forgotten. The book was controversial. As a New Journalist, Wolfe inserted himself into the lives of his "characters" as each in turn becomes a major player in the space program. It was a true story that tintillated the reader's imagination. No novel could have done it better. Beginning with an opening chapter on the terror of being a test pilot's wife, the story cuts back to the late 1940s, when Americans were first attempting to break the sound barrier. Anyone who has ever read it will never forget its Blue Uniform litany. Test pilots, we discover, are people who live fast lives with dangerous machines on the edge. I recall having to punch myself to be reminded that I was not reading a book about the stock brokerage business. Although Wolfe's command of the English language is unparalleled, this edition is enhanced by the inclusion of images culled from Life and Look magazines, NASA and the Library of Congress. The photos chronicle the lives of the people and the social and political climate that created our country's nascent space program. The Right Stuff is my favorite book. Tom Wolfe is my favorite author. This edition is a tribute to both. Yet more than that, it is a tribute to the people and the spirit that made this story possible.

Published by Thriftbooks.com User , 16 years ago
What Wolfe always does well is understand his characters motivations. Al Shephard - Smilin' Al of the Cape/Icy Commander - , Chuck Yeager, John Glenn "the flying monk" - are all sliced and diced by Wolfe's samurai sharp, if not unsympathetic, sword. A brilliant work on patriotism, heroism and American masculinity, with none of the dull twaddle that characterises Wolfe's later works (particularly Man in Full).

The great American novel -- except that it's true

Published by Thriftbooks.com User , 21 years ago
For a very long time "The Right Stuff" was my favorite book (excluding the Bible, which is unique). Even after reading Dante's "Divine Comedy," I'm not sure Wolfe's book has been dislodged from its position.Wolfe begins to work his literary magic on the first page. A young, beautiful woman is worried about her husband, a Navy test pilot, having heard that there has been a plane crash. Space buffs like me reading the book are fascinated to realize that the woman is Jane Conrad, wife of Pete Conrad (which, incidentally, tells us that the bad news that day won't be about her husband). If this scene appeared in a different book about the space program, even one as superb as Andrew Chaikin's "A Man on the Moon" or Jim Lovell and Jeffrey Kluger's "Apollo 13," the account of events, while exciting and suspenseful, would remain on a somewhat mundane plane of everyday reality. Wolfe's glittering, idiosyncratic literary style lifts events into a world of super-reality. We experience Jane Conrad's concern and dread as if we were Jane Conrad. Perhaps more than any other book I have read, "The Right Stuff" has caused me to remember the events it relates as if I lived through them rather than reading about them.One noteworthy feature of Wolfe's style in this book is his nearly Wagnerian use of verbal "leitmotiven," key phrases which pop up over and over in the book and come to convey far more than the simple content of the words. Anyone who has read the book will remember for a long time Wolfe's use of such phrases as "bad streak," "Flying and Drinking and Drinking and Driving," "the Integral," "our rockets always blow up," "the Presbyterian Pilot," "single combat warrior," "ziggurat," and, of course, "the right stuff."The book also contains the funniest set-piece in any book I have ever read, the description of the celebration when the astronauts and their families first visit Houston, including the fan dance by the ancient Sally Rand. Interestingly, in the excellent film version of the book this scene was transformed from a hilarious comedy sequence into something elegiac, intercut with the sequence of Chuck Yeager bailing out of a plane (which happened on a different day in reality and in the book) to create drama and suspense. In this radically different form the two sequences are just as effective in the movie as they are in the book."The Right Stuff" has sometimes been criticized for being overly fictionalized, or at least speculative. These criticisms probably have a great deal of validity, but they do not alter the fact that "The Right Stuff" is the definitive evocation of that brief era around 1960 when almost anything, good or bad, seemed possible. It is an unforgettable literary achievement.

Published by Thriftbooks.com User , 22 years ago
As good as "The Right Stuff" is as a movie, the book is even better. Thomas Wolfe's account of post war American test pilots and the first American astronauts is frank, amusing, moving and ultimately triumphant. Wolfe humanzies the cocky heroes that made America's space program successful. He punctures the myths that have grown up around such legendary men as Chuck Yeager, John Glenn and Alan Shepard and portrays them honestly, warts and all. The test pilot sequences and the onerous astronaut training are the best parts, but the whole book is utterly fascinating. "The Right Stuff" may very well be the best aviation story ever written.

Read the book, then go fly a jet

Published by Thriftbooks.com User , 22 years ago
In the early '80s, I was to graduate from school and got interested in flying for the US Navy. My mother sent a copy of T. Wolfe's book hoping to sway my dangerous intent and take a 'real' job. WRONG. About 9 months later I was soloing over Corpus Christi Bay and on my way to flying Navy jets. Wolfe has written an epic that spans from the early days of flight test through the beginning of the US manned space program. It will increase the heart rate of aviators, aviation buffs and armchair pilots/astornauts. I highly recommend that anyone remotely interested in aviation/space read this book. While it may not be accurate to the smallest detail, the overall scope and feel for a era gone by can never be or has ever been captured in the history books. Regarding Gus Grissom, new facts are coming to light that will clear his reputation. Wolfe does hammer Gus in the book about what was known at the time Wolfe wrote "The Right Stuff". However, all the research and reading that I have done, Gus was probably the smartest engineer and best test pilot of the M-7 astronauts . He had a reputation of being a real nuts and bolts engineer and a hard nose pilot. He could handle any situation while flying experitmental aircraft or on the ground discussing craft/engine design with NASA's engineers. If any one has ever seen the old NASA films of the Apollo program, when Gus is doing the radio tests on that fateful day, he really gives the engineers hell from the capsule owing to poor communication on the radios "Jesus Christ, we can't talk between three building, how the hell are we going to talk on the moon." Classic Gus. Ironically, when Apollo One caught fire moments later, the hatch was redesigned not to repeat the same incident that happened to Gus in Liberty Bell 7 - and Gus, Chaffee and White paid the ultimate price.Read this book. It is one of the best books I have ever read and was a real inspiration during my Navy days and beyond.Bondo
Trustpilot
Copyright © 2022 Thriftbooks.com Terms of Use | Privacy Policy | Do Not Sell or Share My Personal Information | Accessibility Statement
ThriftBooks® and the ThriftBooks® logo are registered trademarks of Thrift Books Global, LLC