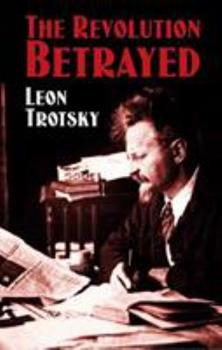 One of Marxism's most important texts, The Revolution Betrayed explores the fate of the Russian Revolution after Lenin's death. Written in 1936 and published the following year, this brilliant and profound evaluation of Stalinism from the Marxist standpoint prophesied the collapse of the Soviet Union and subsequent related events. The effects of the October Revolution led to the establishment of a nationalized planned economy, demonstrating the practicality...

Published by Thriftbooks.com User , 15 years ago
In my humble opinion, Trotsky's "Revolution Betrayed" is the best analysis of not only the Russian revolution, but revolutions in general. I have studied revolutions in the modern world quite extensively, and re-reading this book at this particular time in history was a true eye-opener - again. To be simplistic, revolutions do not provide lasting success when nothing is to be gained. Those who rise against existing power expect to be rewarded, not with poverty, but with a certain degree of wealth and privilege. If there is nothing to be distributed, then what is the use in fighting? Stalin unfortunately stepped in at the right place, at the right time. Not good for the outcome of that revolution, not good for socialism, but good for Stalin's kind of power. A few years ago I visited Komsomolsk, Stalin's "Youth" city. It was decaying, a pitiful sight to behold. Buildings on ultra-wide neglected avenues in need of repair, high weeds everywhere, crime uncontrolled. Power gone bad? Stalin and his compulsive bureaucracy were feared all over Europe. Blessed with clear early childhood memories that include the conversation of adults, I vividly remember my grandmother's fear of Stalin discussed with friends and family members. They witnessed the rise of this awful bureaucracy next door, word of the killings and the horrible brutality didn't just dribble out, it flowed out. I want to say that the Stalinist bureaucracy is unique, but all bureaucracies are designed to increase continuously and feed of themselves, and exist everywhere in the world. And people flock to them for employment, protection, security, in great masses, because bureaucracies deliver security. And if people do not fly into bureaucratic arms directly, they deal with them on a daily basis. There is no getting away from that apparatus of suffocation, nowhere. Bureaucracy does not have to be bad, and Trotsky dwells on the need for leadership from within the workers, the suppressed, creating a bureaucracy that is just and fair. Is that ever possible? I believe that capitalism and bureaucracy are a contradiction, and unless corruption reigns, they cannot coexist. What comes next? Trotsky's book raises more questions than it answers, but I am sure it was written for that purpose as well as enlightening the scholar of his interpretation of a betrayed revolution. And where do we go from here?

The origins of Stalinism

Published by Thriftbooks.com User , 18 years ago
Considering that the Soviet Union has fallen apart, that Leningrad has changed back to St. Petersburg, and that "communism" is discredited in the eyes of the pundits of the world, why would anyone want to read a book about the Soviet Union published in 1937? I'll tell you why. Because this book explains like no other book I've ever read what actually happened in the Soviet Union between the original Bolshevik Revolution and its total degeneration under the Stalinist bureaucracy; and WHY it happened. With plenty of concrete detail, it explains that Stalin and his henchmen took over the Russian Revolution NOT because revolutions are always bound to fail; and not because people are inherently corrupt; or that socialism is doomed. But because of a specific set of historical circumstances that faced the young Soviet workers' state and overwhelmed it. From this situation came Stalin and his fake version of Marxism, which Trotsky does a great job of blowing apart. For anyone who believes that there must be a better way than the dog-eat-dog system of capitalism that we live in, read this book!

A classic of Marxism and a crucial prediction.

Published by Thriftbooks.com User , 19 years ago
Those who have read Lakatos' "The methodology of Scientifical Research Programmes" know that the conservative Lakatos considered to have proven the "unscientific" nature of Marxism by the fact that it had never made any "stunning, unexpected" prediction on the basis of its "core" hypothesis. Well, here you have Trotsky predicting - in 1936 - that the USSR, as a transitional society in the transition between capitalism and socialism had to come to terms with the following disjunctive: either the toppling of the ruling bureaucracy by means of a political revolution or capitalist restoration led by the bureaucracy. If that is not a stunning prediction, what else is?

Essemtial reading in order to understand the history of USSR

Published by Thriftbooks.com User , 22 years ago
With hindsight, it's really quite remarkable how Trotsky was able to understand so vividly the course the Soviet Union was taking and the disastrous consequences that would then ensue. Anyone interested in the history of Stalinist Russia should at least glance through this book. Trotsky offers not only a detailed analysis of the Soviet Union under Stalin, but an interesting critique as well. Finally, perhaps the most interesting factor in Trotsky's book is how he almost seems to forecast the end of the USSR...nearly 50 years in advance.

Published by Thriftbooks.com User , 22 years ago
Anyone who wants to understand the nature of the Soviet Union under Stalinist rule and how the policies of Stalin led to the destruction of the Communist party as a revolutionary force, this book is essential reading. In this book, the reader will find a Marxist analysis by Leon Trotsky on the problems of the USSR coming out of the revolution of 1917 and how Stalin won power by advancing the interests of the soviet bureaucracy against those of the working class. The political counterrevolution that Stalin started destroyed Lenin's party, is explained vividly in this must read for anyone who wishes to understand the evolution of the USSR from the victorious 1917 workers revolution up to the purge trials of the mid 1930's. Trotsky's description of the Soviet Union as a degenerated worker state is first advanced here. He puts forth the necessity of building a new revolutionary party to restore Leninist norms and remove the bureaucratic system of which Stalin was the chief bureaucrat. If you desire to understand the USSR and why it was destroyed, get this book.
Copyright © 2020 Thriftbooks.com Terms of Use | Privacy Policy | Do Not Sell My Personal Information | Accessibility Statement
ThriftBooks® and the ThriftBooks® logo are registered trademarks of Thrift Books Global, LLC