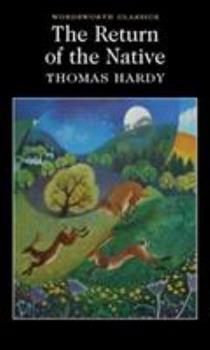 Return of the Native

With an Introduction and Notes by Claire Seymour, University of Kent at Canterbury. The Return of the Native is widely recognised as the most representative of Hardy's Wessex novels. He evokes the dismal presence and menacing beauty of Egdon Heath - reaching out to touch the lives and fate of all who dwell on it. The central figure is Clym Yeobright, the returning 'native' and the story tells of his love for the beautiful but capricious Eustacia Vye...

Return of the Native audio book

Published by Thriftbooks.com User , 14 years ago
As a keen fan of Thomas Hardy, I have found this reading wonderful. Alan Rickman's rendition is beautifully paced and the characters were really brought to life by the variety of tone within his voice. Certainly, this is one of Hardy's gloomier works--but all the more fascinating for the picture given of characters in a truly remarkable landscape. I've always regarded Egdon Heath as the true hero of this work anyway. At a time when I have needed distraction from my own circumstances, this marvellous version has proved invaluable and I look forward to acquiring others to enjoy.

Published by Thriftbooks.com User , 14 years ago
The CD audio book of the Return of the Native actually deserves to be described as amazing. The lyrical prose of Hardy, combines with the incomparable voice and performance of Alan Rickman, to make this a genuine treasure. Rickman, in his limited interviews, has repeatedly referred to himself as an instrument. In this product, the only part of that instrument he could utilize was his voice. It is more than enough: the pictures and action spring vividly to life. Listening to his performance is sheer joy, and it rapidly makes you realize how little his capability has been tapped by film - where the whole "instrument" is utilized. I would give this product the highest recommendation.

Published by Thriftbooks.com User , 19 years ago
Warning: This audio book is highly addictive!!!Maybe you have to like Thomas Hardy before making your mind up to settling down to listen your way through all the 12 tapes. But you will learn to yearn for just another chapter of this, after the first tape. Another word to the yet undecided: the Return is not half as dismal as Jude the Obscure or Tess of the Durberville. On top of the drama between six persons and the heath, which figures as another dramatis personae, there comes Mr. Rickman's superb reading. He gives every person not only his or her own characteristic voice. But his descriptions of the landscape make you see the scenery (apart from the introduction, the description of Mrs. Yeobright's garden on the day of her fatal excursion is compelling. He makes you feel the sweltering heat of that day). Just two highlights certainly are the dicing-game on the midnight heath (tape 6) as well as Clyms and Eustacias final dispute (tape 10). But the whole recording in itself is a highlight.Just one technical afterthought: It would be sensible to edit it on CD. Tapes do not keep so well in the long run and I tremble that one day the tapes may give up.

'A face on which time leaves little impression'

Published by Thriftbooks.com User , 20 years ago
Egdon Heath is the wild and hostile environment in which Hardy's tale of love and loss takes place. The setting of the novel is inescapable and its influence so strong that the heath is almost a character in itself. The action of the novel focusses around three men and three women; Clym Yeobright, Diggory Venn and Damon Wildeve and Mrs Yeobright (Clym's mother), her niece Thomasin whom she has adopted and Eustacia Vye. The other charcters in the novel are the heath people who form a greek chorus to the novel and are occasionally used as instigators of the action. The main theme of the novel is doomed love and the way in which the characters are unable to escape their destiny. It is also interesting to note that the ending to the novel was not the one Hardy inteneded, he had intended to end it after the scene by Shadwater weir. However, his publishers demanded a more positive ending and one which I feel slightly undermines the power of the novel. Most editions have a footnote at the point where Hardy had intended to finish, allowing readers to choose which ever ending they prefer.Hardy's characterisation is highly realistic in that the boundaries between 'good' and 'bad' characters are somewhat fluid. He also explores the idea of the 'fatal flaw' and how people inevitably destroy themselves and those they hold most dear. If you're looking for a 'feel-good' novel this is not the one to go for but if you enjoy enjoy novels like Wuthering Heights and Tess of the Durbervilles then place your order now...

Hardy and Rickman, what a pairing!

Published by Thriftbooks.com User , 21 years ago
What could be better than to be saved from monotony of rush hour traffic than to hear Thomas Hardy's Characters come alive with the meleflous voice of Alan Rickman. I was completly caught up with Eustacia Vye and her impossible quest for love and far away places. It was both a heartbreaking and lovely way to spend 12 hours on the road!Get this audio book as soon as possible! You won't regret it!
Copyright © 2020 Thriftbooks.com Terms of Use | Privacy Policy | Do Not Sell My Personal Information | Accessibility Statement
ThriftBooks® and the ThriftBooks® logo are registered trademarks of Thrift Books Global, LLC