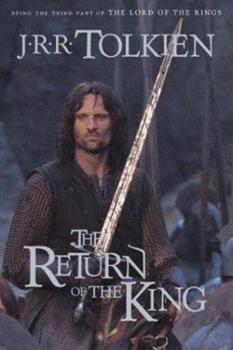 The Return of the King (The Lord of the Rings, Part 3)

(Book #3 in the The Lord of the Rings Series)

Published by cass , 12 days ago
I ordered the red, blue, and green cover art style and i got the movie versions instead. very disappointed.

Published by sharbs008 , 1 month ago
I ordered the Mass Print Paperback for the cover art because I have Fellowship of the Ring in the same art but was disappointed to receive a different cover art --Already have copies of 2&3 in different art so this was really disappointing. I now have two copies of each 2&3 in incorrect art.

Published by AAG , 10 months ago
I didn't like the size , its very small. Very disappointed.

The Return of the King (Lord of the Rings, 3)

A Gift for the Ages

Published by Thriftbooks.com User , 15 years ago
"The Lord of the Rings" is so secure at the pinnacle of all fantasy that any review of it risks presumption. The measure of this work's greatness can be found in the thousands of lesser works it has inspired, some in imitation, most in homage--all pale reflections of the world, the wisdom, the wonder of Middle Earth. Over the years, I have re-read this masterwork at least two dozen times. Yet it never ceases to delight me with new revelations. Over time, these revelations have evolved from discoveries about the book to reflections about myself. This is art in its highest form: it inspires, indeed, demands self-understanding. In my younger days, I was drawn to the clash of armies, the glory of battle, the valour of Aragorn and Eowyn, the sacrifice of Theoden and Faramir. But as I have aged, it is the suffering of Frodo and Sam that most moves me. The deepest courage is not found in battle, but in the act of bearing the heaviest burdens alone, beyond help, beyond hope, beyond endurance, beyond even despair--"that which we are, we are; /One equal-temper of heroic hearts, /Made weak by time and fate, but strong in will /To strive, to seek, to find, and not to yield." This work is perfect in its completeness. It lacks nothing and is endowed with themes both timeless and universal. Consider the role of pity. We contemplate this theme for the first time when Gandalf reflects that Bilbo spared Gollum's life for pity. Then consider Frodo's first meeting with Gollum: "now that I see him, I do pity him." Or Gandalf's rebuke of Denethor, "...for me, I pity even [Sauron's] slaves." Faramir's pity for Eowyn--"do not scorn pity that is the gift of a gentle heart"--lifts despair from her soul and permits her to live and to love again. And the pity between Frodo and Sam is the bond that endures at the last when even flesh and spirit crumble. Not least, Tolkien commands our pity: and we, in the act of offering it--to Frodo, to Sam, most especially to Smeagol--take the world of Middle Earth as our own. Consider also that the little people do the bravest deeds and tread where the great dare not: the quest of the ring is undertaken not by Aragorn, nor even by Boromir, but by a timid hobbit from the Shire, whose quality is not in his pedigree or his strength of arms, but in his will and his strength of character. "If you do not find the way, no one will", Elrond tells Frodo, and, "This is the hour of the Shire-folk". Sad that since Tolkien wrote his majestic work, his erstwhile followers and imitators have fallen back on such tired cliches as swashbuckling heroes and impossibly clever heroines. The magnificence in Tolkien's creation is not to be found in the strong, but in the humble. It is about a gentle hobbit like Sam, who likes his beer and tends his garden and thinks simple thoughts, but who would stare down death while fighting orcs and trolls and giant spiders, not because he thinks himself noble or brave, but because he is far beyond the noble or the brav

all tears are not an evil

Published by Thriftbooks.com User , 16 years ago
This book is the conclusion to Tolkien's epic The Lord of the Rings. We pick up the story from 'The Two Towers'. Frodo and Sam are making their way to Mordor with the help of Gollum/Smeagol. The rest of the fellowship have survived Helm's Deep and Isengard. They again split up as Gandalf and Pippin race to Minas Tirith. Aragorn is charging with gathering an army meet Sauron in battle. This book is divided into two parts. One focuses on Frodo and Sam's journey, the other on the rest of the fellowship. This makes keeping track of the chronology of the story a little difficult, but it avoids jumping back and forth between the various story lines. We follow the story, as the forces for good gather to face the evil Sauron. Aragorn steps out of his role as the ranger from the North and into the true king of Gondor. We watch the Steward of Gondor, Lord Denethor, slip into madness. We see Eowyn rise in battle. This part of the book rises to a fevered pitch culminating in the Battle of the Pelennor Fields. The other half of the book follows the journey of Frodo and Sam. This section is harder to read. Frodo changes from the happy hobbit to a darker creature becoming more and more obsessed with the ring. However, as we see Frodo slipping away, Sam steps out of his humble past to carry Frodo towards Mount Doom. After the culmination of the War of the Ring, the book continues the story of the aftermath. We see that the scars of the journey have not gone away. Enjoy this final installment of the LOTR. It will leave you wanting more. Luckily their are several appendices that follow story lines Tolkien couldn't include in the books.

The Best Of The Lot

Published by Thriftbooks.com User , 18 years ago
One Ring to find themOne Ring to bring them allAnd in the darkness bind themEach generation of storytellers creates a new myth that grabs hold of the imagination of future generations for decades to come. In 1937, J.R.R Tolkien started such a myth with the publication of "The Hobbit". Despite the flaws of their creator and the displays of racial, class, and gender prejudices that is obvious to a modern audience, the books of the trilogy brilliantly recount the tale of Hobbits, Elves, Dwarves and Men and their battle with evil. It is in the portrayal of his heroes struggle against the baser forces that the author transcends his own shortcomings to pen what has become one of the best sagas of courage, nobility of spirit, and raw adventure.Although often referred to as a trilogy Tolkien first wrote "The Lord of the Rings" as a single novel consisting of six books plus appendices. Tolkien's publisher divided this massive book into three novels. The first novel, "The Fellowship of the Ring", was first published 1954. This book continues the story begun in "The Hobbit" when Bilbo Baggins, a Hobbit, found a shiny ring lost by a creature called Gollum."The Fellowship of the Ring" reintroduces the audience to Middle Earth and her occupants. Each of the nine characters that compose the fellowship of the ring represents a different race that lives in Middle Earth. There is Gandalf the gray, a mighty wizard; Legolas the noble elf; the men Aragon a ranger and future king of men and Boromir eldest son of the Stewart of Gondor; Gimli, a dwarf lord; and finally the Hobbits Frodo, the ring bearer; his gardener and friend Sam and his two younger cousins Meriadoc or Merry and Peregrin or Pip. This first book also tells the story of the creation of the Rings of Power by the Elven-smiths and how Sauron the Dark lord of Mordor forged the One Ring filling it with his own power so that he could bind all the other ring wearers to his will. Although defeated centuries ago and his ring lost, Sauron now awakes and seeks it. Bilbo's ring is soon discovered by Gandalf to be the One Ring. Soon it is decided that Frodo and his companions must enter Mordor and cast the ring into the very fires from which it was forged. This is the only way to destroy it.The fellowship ends with the fall of Gandalf to the fiery creature the Balrog, the death of Boromir at the hands of the evil Orcs who kidnap Merry and Pip and the decision of Frodo to continue on with only Sam to Mordor. Aragon, Legolas, and Gimli set of to rescue Merry and Pip from the Orcs.Book two, "The Two Towers," chronicles the separate adventures of Aragon traveling with Legolas and Gimli, Pip and Merry fleeing from the Orcs meeting up with the Ents and reuniting with Gandalf and of Frodo and Sam moving toward Mordor. This book also introduces us to new characters: Faramir, younger brother of Boromir; the Ents, the treelike guardians of the woods; King Theoden of the Rohan, his nephew Eomer and his niece Eowyn. We

The end of the Third Age

Published by Thriftbooks.com User , 21 years ago
The Return of the King is the final part of The Lord of the Rings. In this last part the feeling of good versus evil reaches its pinnacle in LOTR. Tolkien gave incredible detail describing the War of the Ring, as it spanned several chapters. All of the characters are developed further, and for most of the TROTK, the story remains a two way split. TROTK has an amazing conclusion, and that is partly bad. Upon finishing the novel, I was sad that it was over, and I didn't want it to be over, because Middle-Earth is a great place to get lost in. You go on the journey that the Fellowship undertook, and feel everything that each member of the party felt. This is possible because throughout LOTR, Tolkien wrote vivid passages describing the regions of Middle-Earth, the characters, and what they were thinking. I read TROTK more slowly, because I wanted to stay longer than what the novel would allow. The four hobbits of the Fellowship become harden warriors, a trait that was virtually absent from their kind. Even though the novel finally came to a complete finish, it felt like it left room for more. It's to bad that there is no direct sequel, and while it answers most of the questions left from the end of The Hobbit, the reader can come up with plenty more questions upon finishing LOTR. Professor Tolkien did a work that was unexpected in its depth. He invented several REAL languages and writing systems, a complete history to back the novel, and created a wonderful world filled with diverse races and environments. Some fantasy authors may have tried to reach Tolkien's level in fantasy literature, but I am certain the The Lord of the Rings will never be duplicated. The Return of the King stands as the incredible conclusion of the greatest epic ever written. My only regret was that it ended.

The Return of the King Mentions in Our Blog

Did you watch the Oscars last weekend? If so, maybe you're intrigued to catch up on the plays, books, and movies that served as inspiration for some of the nominated (and winning) movies. Plus we share some of our favorite book-to-screen Best Picture winners from the last quarter century.