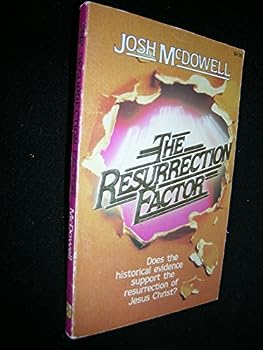 This description may be from another edition of this product. Contains compelling evidence which proves the resurrection beyond reasonable doubt.

From the Back Cover

Published by Thriftbooks.com User , 11 years ago
Josh McDowell has spent hundreds of hours over thirteen years combing the annals of history. Here is comprehensive and compelling evidence. You'll discover: * What authenticates the truth of any historical event. * The extreme security precautions taken at the tomb of Jesus of Nazareth. * The historical evidence that a supernatural event emptied the tomb. * How to answer the theories advanced by skeptics to explain away the empty tomb. * The incredible implications of the resurrection to maximum life in the Twentieth Century.

Published by Thriftbooks.com User , 11 years ago
The book was easy to order and came right away. I had no problems what so ever.

A Solid Resource on the Resurrection of Christ

Published by Thriftbooks.com User , 15 years ago
In this book, the author answers the question, "Does the historical evidence support the resurrection of Jesus Christ?" He makes several observations including an examination of the testimony of history from the point of view of several people, namely, a Roman History scholar, textual critic, and professor of Ancient History among others. The resurrection as foretold in Scripture and basic historical facts are recounted. Intelligent faith is discussed along with the possibility of miracles. Is the resurrection a fact or fable? Is the Scientific Method limited in explaining such an event? What historical criteria can be used? And, what reliable historical documents exist to support the resurrection? In addition, the author provides a review of the several security precautions taken during the trial, crucifixion, and burial of Jesus Christ by the Roman authorities. When these measures were not enough, several facts subsequently had to be reckoned with including the broken Roman seal and empty tomb. How was it that a large stone was moved uphill away from the site and why did the Roman Guard go AWOL? What is the significance of the graveclothes left behind and why did women see the resurrected Jesus first? Many theories have been used to attempt to explain these facts with some people believing that one theory is as good as another! However, there is circumstantial evidence such as the creation of the Church, Sunday worship, Baptism, Communion, and the changed lives of the people who beheld the resurrected Jesus that point to the undeniable occurrence of such an event in history. In this book, you will find out the specifics of why Christians believe in the resurrection. You will also discover how Josh McDowell, a former skeptic, became a believer in Jesus Christ as he began to uncover these truths for himself as he "spent hundreds of hours over thirteen years combing the annals of history." This work is a handy reference for those who want an outline to follow in their own personal study or need a quick snapshot of the issues surrounding the resurrection of Jesus to share with others in a timely manner. It could easily become the basis for a class taught on this subject if further independent study is done to gather additional material to flesh out its contents. Following the eight chapters of the book is a valuable Appendix which addresses three important topics. "Three Days and Three Nights in the Tomb" deals with the question "How could Jesus have remained in the tomb three days and three nights if He was crucified on Friday and rose on Sunday?" It also reconciles the different Gospel accounts with each other of this event. Second, a partial reprinting of Dr. Johnston Cheney's The Life of Christ in Stereo is included because of "its excellent harmonizing of the post-resurrection appearances of Christ" in chronological order. Third, an excerpt from Walter M. Chandler's (former justice of the New York State Supreme Court) The Trial of Jesus wil

Published by Thriftbooks.com User , 19 years ago
I was a sceptic - more than that, I was a hard-core atheist before I read this book. Now, whether I like it or not, I have to accept the fact that Jesus has been resurrected on the third day - fact, not myth.In this book, McDowell addresses all possible (and not-so-possible) "natural" explanations of the resurrection, and discusses them in detail, proving each one wrong. His approach of letting the facts speak for themselves rather than trying to press them into a belief system is what really impressed me.With all the evidence presented, I can no longer deny the facts, and have accepted Jesus as my Lord and Savior. There just isn't a doubt any more.

He argues for a faith based upon strong evidence.

Published by Thriftbooks.com User , 24 years ago
IF JESUS CHRIST WASN'T RAISED FROM THE DEAD, THE CHRISTIAN FAITH IS WORTHLESS! Can the resurrection be proven beyond any reasonable doubt? There's not much point in worshipping a man who is dead and gone. The resurrection of Christ is the pivotal point around which Christianity turns. Author Josh McDowell does a good job of validating the literal, bodily resurrection of Christ as a historical fact. He quotes many experts in fields of archeology, history, legend, ancient Roman and Jewish custom and psychology. He argues for a faith based upon strong evidence. His logic is easy to follow. Points are made without laborious detail or discussion. Very enjoyable
Copyright © 2020 Thriftbooks.com Terms of Use | Privacy Policy | Do Not Sell My Personal Information | Accessibility Statement
ThriftBooks® and the ThriftBooks® logo are registered trademarks of Thrift Books Global, LLC