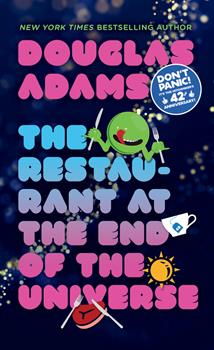 The Restaurant at the End of the Universe

(Book #2 in the The Hitchhiker's Guide to the Galaxy Series)

"Douglas Adams is a terrific satirist."--The Washington Post Book World Facing annihilation at the hands of the warlike Vogons? Time for a cup of tea Join the cosmically displaced Arthur Dent and his uncommon comrades in arms in their desperate search for a place to eat, as they hurtle across space powered by pure improbability. Among Arthur's motley shipmates are Ford Prefect, a longtime friend and expert contributor to The Hitchhiker's Guide to...

Acceptable Condition Is Not Acceptable

Published by Lame , 5 months ago
Acceptable condition had all the pages torn from the binding.

Published by Thriftbooks.com User , 16 years ago
Douglas Adams has a true gift for the absurdly funny and the funnily absurd. His universe is populated with a wide array of the strangest and the most normal characters in sci-fi writing. "Restaurant at the End of the Universe" is a follow-up to "The Hitchhiker's Guide to the Galaxy", picking up where our four main characters left off and flinging them into one zany trip after the next. Lost Earthling Arthur Dent still finds himself cruising the galaxy with his alien pal Ford Prefect, fellow Earth exile Trillian and the two-headed, ex-president Zaphod Beeblebrox. Beeblebrox is much more the main character in this second novel and readers follow him on his quest to find the man in control of the universe, as well his attempts to keep the 'responsible' part of his brain from interrupting the 'fun' seeking half. "Restaurant at the End of the Universe" is a laugh-out-loud trip through the created Cosmos and a sometimes thought-provoking look at human behavior. Douglas' asides and explanations to the readers are priceless, especially his verb tenses for describing time-jumping situations. The novel is quick-paced, and comes to rather an abrupt ending, which leaves the reader wondering how the third would possibly begin, and anxious to find out.

There is something for every taste in this Restaurant's menu

Published by Thriftbooks.com User , 17 years ago
It is a waste of time trying to read "The Restaurant at the End of the Universe" without having read "The Hitchhiker Guide's to The Galaxy". The second novel is a sequel whose understanding and appreciation totally depend on understanding the first book. And those who didn't like the previous book are very likely to not like this one as well. Douglas Adams is back with his witty sense of humor and unstoppable imagination. "The Restaurant at the End of the Universe" picks up from where "The Hitchhiker Guide's to The Galaxy" finished. But before the four humans and the robot reach the title's restaurant there is much weird adventure to come. Those readers who enjoyed the first book have much more here to be delighted. To begin with, besides the sense of humor, Adams has injected much more adventure in this second installment. There is much more to gasp for than to laugh at. But, as a matter of fact, it is not a problem, since the funny parts are really funny. In this second step of "The Hitchhiker Guide's to The Galaxy" trilogy (consisted of five books!) Adams exploit deeper the personality, fears and anxiety of his characters. For the most part of the book, the most important character that is the center of the action is Zaphod. But Arthur, Ford, Trillian and the delightfully depressed Marvin are never forgotten. In the next chapters the narrative splits in two different poles with two groups of characters. However little he appears, Marvin is still the best. His depressive pre-prozac behavior is one of the funniest things in the book. His interactions with other machines and human beings are unforgettable. The book `ends' with a perfect hook for its sequel "Life, Universe and Everything". Adams has a knock for leaving you breathless and waiting for what will come next. One can only hope that he keeps up the level of funny ideas and unstoppable adventure.

Published by Thriftbooks.com User , 18 years ago
This will not go down in the history of books as the best ever written, unless you're an easily entertained Sci-Fi geek. Otherwise, this is enjoyable and fun reading. No more, no less.

Dinner is a few light-years away...

Published by Thriftbooks.com User , 20 years ago
After the destruction of Earth, and beginning their search for the answer to "Everything", Arthur Dent and Co. decide to take a little break from their quest and stop by at the Restaurant at the End of the Universe where the food is as odd as it can get. "The Restaurant at the End of the Universe" is the second book to the trilogy "Hitchhiker's Guide to the Galaxy" by Douglas Adams. Book one, first of all, should be read first since most of the background information is in there. This sequel is again also a must read for anyone who enjoys humor and science fiction. The best part of this book I think is that the author has the most craziet ideas impanted into the storyline. Also as a definite positive in this book is that the characters and storyline are very well built. Even though character attributes are not given direct and clear, their actions and speech can give you the idea of unique characters who can be easily distinguished from each other. The storyline, after reading the book, you will be able to tell that it has everything needed for a well built story, especially the exploation of the author's own special world.Even though thay are from the same trilogy, I think that the first and second book has different purpose to it. Both books are extremely funny, but book one was to explain the basic points and create the scene for the story to flow in, while "The Restaurant at the End of the Universe" is more packed with adventure and discovery. Anyways, before this sounds like a analization, I would recommend this book not for just people who like humor and science fiction like I said above, but to everyone. This book isn't very long, so it'a very readable. There are almost no slow parts in the story so it's not monotone. So if you got a few minutes each day, find this book and start reading!

Published by Thriftbooks.com User , 22 years ago
Yes, there is a resturant that you can dine at and watch the end of all we know, while at the same time, having a fabtastic dining experience!Hilarious book! Met Marvin the Paranoid Android. Witness the end of all time/space. Meet an intelligent speaking animal that presents itself to you as your main course and is insulted if you don't eat it!A fun, fun book!
Trustpilot
Copyright © 2022 Thriftbooks.com Terms of Use | Privacy Policy | Do Not Sell or Share My Personal Information | Accessibility Statement
ThriftBooks® and the ThriftBooks® logo are registered trademarks of Thrift Books Global, LLC