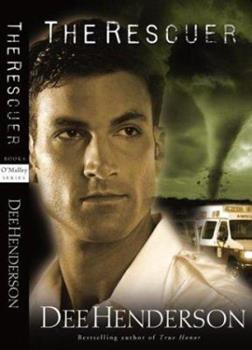 The Rescuer: The O'Malley Series, book #6

Stephen O'Malley is a paramedic who has rescued people all his life. But he'll never forget this night: a kidnapping, a storm, and a race to rescue the woman he loves...

The Rescuer is highly recommended.

Published by Joyce Henderson , 3 years ago
The Rescuer by Dee Henderson is uplifting, a page turner and a good read. Meg is so understanding and patient with herself and everyone else. Stephen has a hard time, but once he makes up his mind, he's very sure about his future. This is a good book for teens and adults who like suspense, clean romance and gospel truths all in one. I recommend all of the books by Dee Henderson.

I hated to see the series end.

Published by Thriftbooks.com User , 18 years ago
Stephen O'Malley was a paramedic. After watching his sister, Jennifer, die of cancer, and seeing all the horrible things his profession sent his way for over ten years, Stephen was running away from everything ... including God. Meghan "Meg" Delhart had worked in an emergency room of a major hospital until the night a driver ran her car off a bridge and caused her to become blind. She began helping her father in his health clinic in Silverton, Illinois. But life in a small town was not always slow and uneventful. Stolen jewels were turning up in the oddest places. Someone had been walking through her house and going through her things. So she turned to the one person she knew she could trust, the man she had had a crush on since was a teen, Stephen. ***** No one blends family and faith with heart pounding action like Dee Henderson! This author just ROCKS! This book, "The Rescuer", marks the end of the O'Malley Family series. In this story the main characters are Stephen and Meghan, yet many of the other members of the O'Malley clan appear. There is stolen jewelry, fraud, murder, kidnapping, medical traumas, Stephen slowly learning faith, tornados ... the list of actions just go on and on! It is as if the author poured her heart and soul into this story. Perhaps she did, since this is the last. As the reader, I sure did not want this series to end. An awesome ending to a thrilling series. Highly recommended! ***** Reviewed by Detra Fitch of Huntress Reviews.

An extremely enjoyable and heart felt series of books

Published by Thriftbooks.com User , 19 years ago
I have really enjoyed reading the O'malley series in its entirety over the course of the summer. One of my friends at college who is a christian suggested that I give these books a try because they featured, "a lot of doctors," and delt with a lot more than Christianity. I am not a Christian and have never bought in to any real religious faith, but I am a premed student so I wanted to see how Henderson painted the medical profession which was the origional reason I decided to give the series a try. I found myself being drawn in to the plot of the series from the first page of book number one. I particularly enjoyed reading about Jennifer and felt for her as she battled with cancer. I also enjoyed the messages of the books and came to a new understanding of the importance of friends and family, and exactly what makes people happy and what is important in life. Jennifer's story though not true inspired me even more to become a doctor because I saw first hand how much she touched her pediatric patients and what her profession and family meant to her. I also found Henderson's discription of medical settings and professionals to be extremely acuraten and was impressed by that fact. I could clearly picture for instance the gracy area behind Hopkins where the O'malley's spent the day during Jenifer's gruling hospital stays. I also found myself drawn to Lisa and Stephen and thought that the author did an excellent job of portraying the stresses of practicing medicine in an Urban area. Although I did not readily except the Christianity in these books I found a great deal to identify with as a person who is not a Christian and thought that Henderson was extremely realistic in her portrait of a family battling cancer and the struggles associated with that reality. These books are worth reading for anyone who is considering medicine as a career because they offer a different prespective in to the life of a physician and are extremely suspensful and romantic besides. Both Christians and others will be able to identify with these books which present an excellent picture of reality.

One of my favorite O'Malley books!

Published by Thriftbooks.com User , 19 years ago
Dee Henderson, you're an incredible writer, my hat off to you! The sixth book of the O'Malley series, "The Rescuer" is a captivating and thrilling story! And if you've read all the previous books and loved them as much as I do, I'm sure you feel a part of the O'Malley family now!The O'Malley family consists of seven brothers and sister, three boys and four girls. Since they were little they had been in the same orphanage and when they got out of the orphanage, they decided to 'adopt' each other, taking the name O'Malley as their family name. They all have very important jobs, Marcus is a U.S. Marshal, Kate a negotiator for hostage situations, botched-up robberies, etc., Jennifer is a doctor, Jack a fireman, Stephen a paramedic, Rachel a trauma psychologist, and Lisa is a forensic pathologist. This story is about Stephen O'Malley, 'the rescuer'.Stephen O'Malley is a paramedic and he has been saving lives and rescuing people all his life. Now he's feeling insecure about himself and his life; his sister Jennifer has died from cancer and he can't come to terms to having to live without her. As for the rest of the O'Malleys, they are all Christians now, are all attached being either married or engaged, and have a sense of peace. Stephen on the other hand feels left out, he hasn't found someone special in his life and can't believe in a God he doesn't want to trust. Meghan Delhart has had a crush on Stephen since at a very young age. She is blind because of a terrible accident years before. She knows that Stephen is hurting and will do anything to help him. But she also knows she can't become too close to him, she believes in her personal Savior Jesus while Stephen tries to run away from the truth. Stolen jewels start to turn up at the strangest of places. And it seems that the criminal conspiracy is somehow connected to Meghan. Stephen will go to the greatest of lengths to protect and help her out, and before he knows it, he soon finds himself falling for her. But first he must work out the turmoil in his heart and search for the peace which has been eluding him all these years. Can Jesus Christ be the answer, can Stephen put his trust in the God he has been running away from? But time is running out, the race is on to find out about the jewels before the thieves do."The Rescuer" has got to be on of my most favorite of the O'Malley series, including "The Negotiator" and "The Guardian". It's not a real mystery story, but be assured there is a lot of suspense and intrigue! And the love story is an interesting one, Stephen and Meghan have been friends for years but cannot be anything more because of different beliefs. Stephen hasn't been mentioned that much in the previous books but here we get to know a lot about him. I really like his character, he's so believable and sounds like a great person to have as a friend. Meghan is also a good character, Dee Henderson gives us a look at the life of the blind in Meghan. I can highly recommend this book though

Great Conclusion to the O'Malley Series

Published by Thriftbooks.com User , 19 years ago
Let's face it, Dee Henderson doesn't disappoint. I have recommended her books to at least half a dozen Christian fiction readers at the library where I work, and they all have loved her."The Rescuer" was a great book on which to end the series. My only reservation was that she didn't bring in more of the O'Malleys in this wrap-up. Kate was featured a good bit and Jack showed up several times, but it would have been nice to "see" everyone one last time. However, it was nice to see that it was Jennifer's faith that made God present to Stephen, as it had done for the other O'Malleys as well.

Published by Thriftbooks.com User , 19 years ago
Wow! Dee has done it again. This is an excelent book. The Healer made you cry because of their loss, but this one helps you deal with that sorrow, and start again. I love how Dee takes real characters and puts them in situations that are extreme, but gives them real emotions.This is the last of the O'Malley books and we get to finally meet Stephen. Although I am very dissapointed that this ends the story of the O'Malley, I am looking forward to her next series, The Uncomon Heroes. Take my advice, if you like romance, suspense and a good story, read Dee Henderson!
Trustpilot
Copyright © 2022 Thriftbooks.com Terms of Use | Privacy Policy | Do Not Sell or Share My Personal Information | Accessibility Statement
ThriftBooks® and the ThriftBooks® logo are registered trademarks of Thrift Books Global, LLC