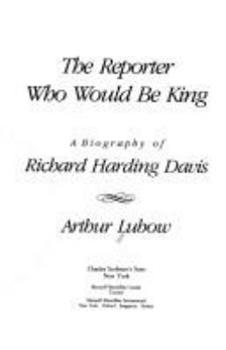 The REPORTER WHO WOULD BE KING: A BIOGRAPHY OF RICHARD HARDING DAVIS

A biography of the most recognizable face during the turn of the century describes how a generation of writers tried to emulate Richard Harding Davis in their writing and explores why this... This description may be from another edition of this product.

The Return of Richard Harding Davis (Is Long Overdue)

Published by Thriftbooks.com User , 20 years ago
.Highly recommended for the adventurous at heart.When I began reading Lubow's biography, I knew nothing of RHD, other than he was a well-known journalist at the turn of the century. A major discovery was in store. During this most interesting read, I became fascinated with his persona, his rise to fame, his peculiar first marriage, and most especially his experience and adventures in covering (so many!) wars. Equally fascinating is the criticism that followed him. His writing was "overblown." He put on airs of royalty. His fiction was simple-minded, etc. etc. etc. Deserved? Maybe on some points. He wrote a certain way for a certain time. It may not all have been high art, but it worked, famously. So what really nagged his critics? HE WAS TOO POPULAR. We can only imagine how big a star he'd be today. He was the best known journalist of his day. He was startlingly handsome. He wrote best sellers. He worked in New York City. He built a dream house in the country. He loved to party with famous friends. He enjoyed plays on Broadway. He WROTE plays for Broadway. He was a member of a social elite few could ever join, and fewer would ever want to leave. Enough? Now add his European, Latin American, South African and Far Eastern war adventures, some of which were astonishing, and you've got the makings of a major, major modern day celebrity.I was happy to make his acquaintance.It is unlikely that another so detailed biography will be written of RHD. It is as factually correct as any will get (footnotes abound). Yes, there could have been more analysis and commentary, but as written, we are left to make our own judgments about the man. Read the book, if you can still get it, and you will be happy to discover Richard Harding Davis.A final word. When he died, Theodore Roosevelt and Winston Churchill were among those who wrote him tribute. But most memorably, here are the final lines offered by Booth Tarkinton:"Youth called to youth: all ages read him, but the young men and young women have turned to him ever since his precocious fame made him their idol. They got many things from him, but above all they live with a happier bravery because of him. Reading the man beneath the print, they found their prophet and gladly perceived that a prophet is not always cowled and bearded, but may be a gallant young gentleman. This one called merrily to them in his manly voice; and they followed him. He bade them see that pain is negligible, that fear is a joke, and that the world is poignantly interesting, joyously lovable. They will always follow him."Wow.
Trustpilot
Copyright © 2022 Thriftbooks.com Terms of Use | Privacy Policy | Do Not Sell or Share My Personal Information | Accessibility Statement
ThriftBooks® and the ThriftBooks® logo are registered trademarks of Thrift Books Global, LLC