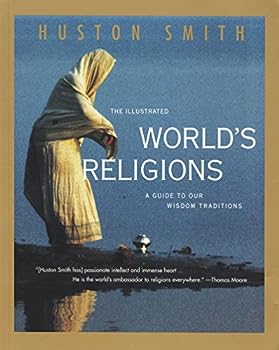 The Illustrated World's Religions: A Guide to Our Wisdom Traditions

The World's Religions, by beloved author and pioneering professor Huston Smith ( Tales of Wonder ), is the definitive classic for introducing the essential elements and teachings of the world's... This description may be from another edition of this product.

This Book Is A Pilgrimage Of A Lifetime

Published by Joanne Richmond , 9 months ago
I was fortunate enough to have studied with Dr. Smith at Syracuse University in 1982. He was a very humble, yet exciting man. He told us all about what the update to The World's Religion would contain and gave us personal accounts of his spiritual journey in a way that made us feel like we were there ourselves. The same way his writings reach out to draw you in, in all his books.. He is respectful of all religions, not only from a scholar's view but from a pilgrims experience. I consider myself fortunate to have known him, and now that he is no longer among us, I wish he could give us one more chapter to tell us what he now knows is the "true" religion is, or if none of us is even close. God speed, Huston. Now you know.

Published by Thriftbooks.com User , 17 years ago
From what I've read previously, many people regarded Huston Smith's initial version of this book (The Religions of Man) as a classic examination of religions; a work that would have retained it's reputation without revision. Yet Dr. Smith was not content to allow his words to become dated, and we are all the better for it. Some of the changes might be regarded as more or less stylistic, such as rendering the title and text more gender neutral and thus more reflective of current thinking. Other additions include a discussion of the aboriginal philosophies of native Americans, Australians and Pacific Islanders. However the core appeal of this book comes from Dr. Smith's ability to illuminate the core principals and philosophies of each religion with both respect and admiration. Smith states his purpose early on as an exploration of ideas and beliefs. And he explicitly warns that this book "is not a balanced account of it's subject." Accordingly, "this is a book about values" not religious history. As such it forms an excellent basis from which a person might broaden their understanding of the major religions of the world. This is reinforced at the end of each chapter with the author's suggestions for sources of additional reading and exploration. Given the immensity of his subject matter, I'm amazed that Dr. Smith was able to keep his book at a manageable size. There are so many branches and divisions within the various religions that a less disciplined scholar might become lost in, adding pages and pages of minutiae that might otherwise obscure the overall purpose of relating how people of different faiths define and seek to become closer to God. I might issue one caveat to "index-browsers" like myself, who check out the index for areas of interest prior to beginning the book. There are some topics, like Mormonism, the Bahai beliefs, Scientology and current trends in religious fundamentalism that are given cursory or no discussion. You might find that disappointing at first, but invest the time in reading a chapter or two, you will find it well worth your while.

Respect for the wisdom traditions

Published by Thriftbooks.com User , 22 years ago
This book has deep respect for the wisdom traditions and Huston Smith has lived this. A practicing Methodist, Smith had discussions with the Vendanta Society, does Hatha Yoga, and prays five times a day like the Muslims. His perspective is not one looking for divisions within a religion, but as an outsider wanting to understand the experiences. For example, in discussing Islam, he talks about the Sufis, but not about the division between Sunnis and Shi'ites. This book is less about details, facts, and religious holidays, and more about the underlying meaning and unique insight of each religion. E.g., in discussing Hinduism he looks at "What people really want", about a wearing out of the material world. In the chapter of Judaism he discusses meaning in history and justice.The illustrations complement the text with a symbolic sense of the culture and beliefs. Looking at a sculpture of a very sensual Shiva with consorts helps one realize that the Hindu view of pleasure may be different than your own. The Buddhist and Taoism paintings project a sense of peace. The photographs of the worshippers are very respectful.

A Guide to the World's Wisdom Traditions

Published by Thriftbooks.com User , 22 years ago
I feel hugely privileged to have spent a weekend with Dr. Smith, receiving an oral overview of this material at the Esalen Institute. I found this most avuncular gentleman to the epitome of sincere faith, and his gentle nature reminded me of the late, great actors Robert Young and Jimmy Stewart.The Illustrated Guide to World Religions provides not only a lucid summary for each of the world's great Wisdom Traditions, but also contains gems of wisdom from each one. Browsing through this book, I discovered one such gem that has made a profound difference in my experience of prayer and meditation. Reading Rabi'a al-Adawiyya's "Night Prayer," I came to understand and share in this Sufi saint's feeling of being wedded to one's Maker.

Brilliant synopsis of the best of the world's religions

Published by Thriftbooks.com User , 25 years ago
Mr. Smith extracts from the world's great religions - Hinduism, Buddhism, Taoism, Confucianism, Islam, Judaism, and Christianity - that which is ideal. He intentionally does not delve into the minutiae of religious history or the many ways in which religion has been used as a vehicle for evil. As he explains, "The empowering theological and metaphysical truths of the world's religions are . . . inspired. Institutions - religious institutions emphatically included - are another story. . . ." The book thus sets forth in careful, clear prose and clever detail the very best of seven influential world religions - their core beliefs, their inherent beauty. Mr. Smith is a genius with an analogy, and unfamiliar, or arguably bizarre, religious abstractions are summed up and made concrete in the stroke of a pen. Take, for example, the Christian doctrine of the Trinity. "It holds that while God is fully one, God is also three. The latter half of this claim leads Jews and Muslims to wonder if Christians are truly monotheists, but Christians are confident that they are. As water, ice, and steam, H2O ssumes states that are liquid, solid, and gaseous while retaining its chemical identity." This brilliant book is a "must read" for everyone, of every religious persuasion. The respect it instills for diverse religious beliefs, and the manner in which the reader slowly comes to realize how much seemingly incompatable religious systems have in common, is nothing less than profound. -- Christine Klein
Trustpilot
Copyright © 2022 Thriftbooks.com Terms of Use | Privacy Policy | Do Not Sell or Share My Personal Information | Accessibility Statement
ThriftBooks® and the ThriftBooks® logo are registered trademarks of Thrift Books Global, LLC