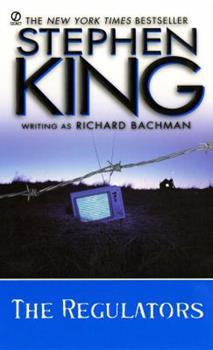 by Richard Bachman and Stephen King

There's a place in Wentworth, Ohio, where summer is in full swing. It's called Poplar Street. Up until now it's been a nice place to live. The idling red van around the corner is about to change all that. Let the battle against evil begin.

Published by Greg , 2 years ago
Another outstanding novel by the Master. Definitely worth the time to read this book.

Published by Thriftbooks.com User , 16 years ago
'The Regulators' is not quite on the literary level of 'Desperation,' but that makes it more fun in a way, especially as it's less preachy. I liked that 'The Regulators' adds a little more information about the mysterious Tak. Here we see a more terribly playful, oddly fastidious, and possibly younger Tak who loves spaghetti, chocolate milk, westerns, and Cassie Stiles. And while most of the characters of 'The Regulators' are flatter than those of 'Desperation,' 'The Regulators' gives us a glimpse of what some inhabitants of Desperation might have been like before Tak possessed them, particularly Audrey and Collie who were never shown "pre-Tak" in 'Desperation.'

Published by Thriftbooks.com User , 17 years ago
I read Desperation and enjoyed it immensely much like i did with The Regulators also. This book is filled with suspense from page one. The book never drags in my opinion. This book though is not for the faint of heart. If you don't enjoy high body counts and gore then you will not like this book and will most likely put it down by the second chapter. But if you don't mind it at all like me you will enjoy the suspense he gives you and the twists and turns this book takes. The ending is by far the most suspenseful part. I also recommend reading Desperation first because you will probably understand it better and get a better look on what Tak is all about. The journal entries and newspaper articles are a very nice touch to the story and it lets you understand what is going on alot better also. I wish there was a part three to this but sadly there isn't. I can't choose between Desperation and Regulators because their both great but The Regulators does have the more suspenseful end to it. Although it is alot bloodier and may you even get a brief lump in your throat like i did when a tragic thing happens in the end. Keep up the good work King.

The Bestselling Companion of Desperation

Published by Thriftbooks.com User , 18 years ago
The Regulators is plain great. This is just one of those stories where you get sucked in and cant get out. I know one reviewer gave this a one star, but don't pay attention. The one star reviewer did mention that this novel had its somewhat perverted parts and it does. I will admit that. This is a Bachman book and is very graphic. Not recommended for younger children. Now, why do I think The Regulators is great? Because of the same reason as Desperation. It is very exciting in the first few pages. I will give away little as possible, but I will say in the first few pages there is a drive by shooting. From there on the book is a roller coaster ride. The reader wants to know more and more. You just can't stop until you know the next twist of plot. For those of you who hunger for a good overview before reading a book I shall provide your wish. Seth is autistic. Something has taken him over. He is starting to manifest vans which are eerily like Power Wagons. Poplar Street turns into hell instead of peacefulness. The people on Poplar Street must try to solve and defeat "Seth". To sum it all up, this is a graphic and gory book that is great. The writing is maybe not as good as other novels he has written, but the plot is great. Obviously, I won't even think to compare it with It or The Shining but still it is King at the top of his game. I encourage you to read Desperation first(I did), because the book will make much more sense. Desperation gives you good information about Tak. One other thing to mention too is the various journal entries and documents King puts in The Regulators. I enjoyed the entries and documents which took up a pretty big portion of the book(maybe 100 pages worth of entries). This was awesome because we were able to see Seth's descent into madness from Audrey's perspective.

Published by Thriftbooks.com User , 22 years ago
I came in to reading The Regulators having no idea what to expect. I come away amazed, thrilled, and glad to have made a good purchase. The plot twists, great character developments, surprises, and the odd format kept me reading, and hanging on every word. The details come pouring in, and the story unfolds. It takes place in Wentworth, Ohio, as a massacre occurs in the middle of a beautiful summer day. Poplar Street begins to look like Main Street, Desperation, Nevada, circa 100 years ago...but one house, that of one Audrey Wyler, remains untouched, her autistic nephew within. The story is interspliced with news clippings, journal entries, and teleplays that give a hint of what comes in the next chapters...none of it expected. How "Bachman" manages to keep the dozen or so essential characters fully developed is really amazing, and the story is a great one. This was the first Steven King book I've read, although I didn't realize it until I had finished. A couple days later, I found King's (really him this time) book "Desperation", with similar characters in a familiar setting. I bought it then and there. Needless to say, I must insist you purchase Richard Bachman's "THE REGULATORS"--You won't be disappointed, I guarantee it!

Published by Thriftbooks.com User , 23 years ago
This was an extremely enjoyable book, Desperation's "evil twin" if one could say that. Remember, this isn't the "real" Stephen King writing. The Regulators and Desperation have no true plot connection - the characters' names are reused in each book, yet flipped around to those of a different age and personality. It is in this way that The Regulators (if read before or after Desperation) is a melodramatic and freaky story. Don't expect the usual King. Instead, expect a horror story in the setting of an over-perfect (almost already completely surreal), town that gets even more surreal. If you read the back of the book before you start the full text (if you know what's about to happen right from the start), the novel is terrifying. Get it with Desperation and enjoy both of them as separate parts of a truly nasty whole.
Trustpilot
Copyright © 2022 Thriftbooks.com Terms of Use | Privacy Policy | Do Not Sell My Personal Information | Cookie Preferences | Accessibility Statement
ThriftBooks® and the ThriftBooks® logo are registered trademarks of Thrift Books Global, LLC