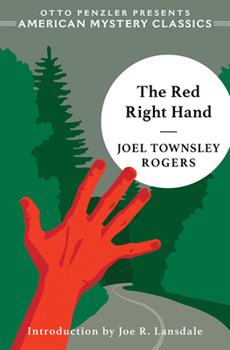 After the death of Inis St. Erme, Dr. Henry Riddle retraces the man's final moments, searching for the moment of his fatal mis-step. Was it when he and his bride-to-be first set out to elope in Vermont? Or did his deadly error occur later--perhaps when they picked up the terrifying sharp-toothed hitch-hiker, or when the three stopped at "Dead Bridegroom's Pond" for a picnic? As he searches for answers, Riddle discovers a series of bizarre coincidences...

Published by Thriftbooks.com User , 16 years ago
A corpse with a missing hand, sightings of a twisted gnome driving a sleek convertible, the lone hitchhiker on a deserted highway comes straight from a nightmare's central casting. "The Red Right Hand", written in 1945, fresh and jolting in the 21st century, must have absolutely rocked the literary world of its day with this strangely creepy tale of young love gone impossibly wrong. Dr. Harry Riddle finds himself implicated in the murder of Innis St. Erme, a young New York businessman who had set off to New England to elope with his bride-to-be when a roadside picnic takes a terrible turn. Author Joel Townsley Rogers spins this bizarre and eerie tale tightly around a non-linear plot, leading the reader down a hallucinogenic trail of murder and mind games that is sure to confuse and delight - like you're kicking back on a lazy Saturday afternoon a pick up an early "Twilight Zone" episode mid-flight. But by the time its over, you're on the edge of your seat, yet still completely unprepared for the final twists and turns that would leave Hitchcock stuttering. Classic stuff - the best - don't miss this one.

Published by Thriftbooks.com User , 18 years ago
I found this book by chance at a second hand book sale while on summer holiday about three years ago. The edition was printed in 1975 and by now (after reading over and over) looks rather shabby.I had never heard of the author before and was merely looking for something to pass the time. It didn't pass much time, because once I started reading I couldn't put it down, and only took me one day to finish.Joel Townsley Rogers puts you, neé, throws you right in the middle of a first-person account of this murder mystery that unfolds in one day. The story and subsequent mystery slowly unravels as he takes you back in time, revealing the characters and the events leading up to the day in which the story is told.You start guessing and wondering, painting your own mental images of the characters and surroundings desribed with meticulous attention detail.There are clues throughout the book, and careful reading is required. Read it again and again, and more clues are revealed.As far as endings to any book are concerned, they're pretty imprtant, so I won't divulge any details. I will say this though...be prepared! This is whodunnit to the very end, and even though the ending has never changed in the 7 times that I've read it...I'm reading it again for the 8th time right now.Enjoy and share

Published by Thriftbooks.com User , 23 years ago
I can only agree with the other reviewers. I bought this book new in a local bookstore after picking it up and reading the introduction and a few paragraphs. I've never read another book quite like it. This book really stands on its own and unlike many others I believe that the sobriquet 'classic' truly applies to this novel. Buy it!!!

A surreal murder mystery; gripping from start to finish

Published by Thriftbooks.com User , 24 years ago
A classic, in medias res mystery, in which no one is innocent until the end; scene after terrific scene leads you to an end that will knock your socks off. If you've ever lived in CT (as I have) you will recognize and respond to this book. The smell of roses and fresh earth -- !!!!!

Published by Thriftbooks.com User , 24 years ago
This is one of the truly great ones, a crime novel that you will remember ten years after you read it . I know -- it's been ten years since I last read it, and it just floored me again. The writing is a bit affected and takes some getting used to, but it's worth it. When you get to the climax and the secret is revealed, you'll sit slackjawed and start paging back through the book, desperate to see how you missed it. A brilliant puzzle, brilliantly constructed and brilliantly unfolded. If you like mysteries, do not -- I repeat, do not -- leave this screen without buying this book.
Trustpilot
Copyright © 2022 Thriftbooks.com Terms of Use | Privacy Policy | Do Not Sell My Personal Information | Accessibility Statement
ThriftBooks® and the ThriftBooks® logo are registered trademarks of Thrift Books Global, LLC