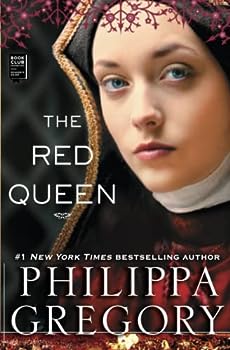 The inspiration for the critically acclaimed Starz miniseries The White Queen , #1 New York Times bestselling author Philippa Gregory brings to life Margaret Beaufort, heiress to the red rose of... This description may be from another edition of this product.

Published by liz , 1 year ago
Love the history and getting to know the lives of these characters

Margaret, what a villain!

Published by Reader , 1 year ago
I loved hating Margaret every step of the way. What a life she had! Great read.

Published by Thriftbooks.com User , 12 years ago
Gregory gets it right again in this compelling character driven novel. Margaret Beaufort is a vain, vindictive and self-serving cow whoclaims utter piety whilst only pausing before ordering the deaths of children. If you like your history staid and uncommitted, then this is not the novel for you. Gregory chooses to breathe life into all her historical characters by presenting plausible personality traits. Beaufort is said to have been widely disliked... Gregory`s spin suggests the reasons why.

Published by Thriftbooks.com User , 12 years ago
I listened to the AUDIO version of Philippa Gregory's latest, The Red Queen, and I can't remember the last time I brought discs from the car into the house, so that I didn't have to tear myself away from a story. Young Margaret Beaufort knows that she has been born for a great destiny, and she believes she has the ear of God following in the tradition of Joan of Ark. Later when confronted with the limitations of women of the time, she realizes her destiny is to have a son, the next King of England. With unwavering conviction, she pursues this ambition beyond conscience and reason. Gregory makes no excuses for Margaret. She doesn't try to explain her motivations, and she actually writes her unsympathetic to the point of villainy. And it not only works, but makes Margaret fascinating. Her rivalry with Elizabeth Woodville is a delight. "This damned woman, this witch, has been in my light ever since I was a girl, and now, at this very moment when I am using her, using her own adoring family and loyal supporters to wrench the throne from her, to destroy her sons, she may yet win, she may have done something to spoil everything for me. How does she always do it?" Further Gregory allows the dialogue between her martial and political allies speak for reason, especially when her second husband calls the entire Lancastrian branch "insane" before riding out to fight for York. Any historical fiction devotee will devour these passages. The Red Queen is easily the most political novel I've read of Gregory's, and I am surprised to how her novels continue to captivate despite the limited subjects and time periods she works within. For me, she keeps getting better. This novel is Part 2 of the Cousin War Series (apparently Gregory has planned six), and is a good companion novel to The White Queen providing surprising depth to Gregory's version of the time. The characters in that novel manage to tell a new story through Margaret's perspective. I will definitely grab the next one, and in no small part hoping for some more glimpses of Margaret. Bianca Amato reads with the necessary fervor to compliment the text.

Published by Thriftbooks.com User , 12 years ago
This book arrived in just a matter of a few days and was in excellent condition. I am very pleased with the company who shipped it to me. M. E. Lovelace

Published by Thriftbooks.com User , 12 years ago
Reading the other side of the Cousin's War was an experience worth every minute! Margaret shows the religous dedication expected of a person of her time, the stamina of a mother and the heartbreak of a woman living in a time when women were only vessels for keeping men and their lineage alive. Never able to consumate her own love for Jasper Tudor, she was able to keep alive the hopes of the Tudor family to put her only son, Henry on the throne of England. It is a historically accurate depiction of England during a war that pitted brother against brother. Excellent in every way.

Her books resemble films, as accurate as any documentary but thrillingly intimate and eventful as we

Published by Thriftbooks.com User , 12 years ago
Too many historical novels are like tapestries: detailed, finely wrought and colorful, but essentially static. Things happen to these needlework queens and kings, courtiers and common folk, but they remain lifeless figures. They put me to sleep. Philippa Gregory's fiction keeps me up. Her books resemble films, as accurate as any documentary but thrillingly intimate and eventful as well. A rich, consistently engrossing narrative voice is her preeminent tool, and in THE RED QUEEN, as in her other bestsellers, I felt that the protagonist was right in the room with me, whispering confidences --- so close that I could see the perspiration on her upper lip, the cross around her neck, the gold embroidery on her gown. This is Book Two of the series Gregory calls The Cousins' War (the original name for the War of the Roses, which pitted Lancaster against York), and the starring role is played by Lady Margaret Beaufort. A Lancastrian descended from Edward III (and thus in line for the English throne), Margaret soon discovers that her family tree will determine her entire future. This pious and intense child doesn't see why she can't become Joan of Arc, or a nun (preferably an abbess), or at least marry for love. But to be strategically "wedded and bedded" is her lot. As her mother puts it in a chilly premarital advisory, "You are a girl: girls have no choice." As Margaret matures, she doesn't lose her fanatical faith, but she transfers it from aspirations to a life of prayer to the more worldly vision of her son as king. Since Margaret's first husband, Edmund Tudor, is also of royal lineage, their offspring could conceivably rule the land as Henry VII...were it not for the many other aristocratic heads that would have to roll before his was crowned. That doesn't deter Margaret. In the next couple of decades, she lies, cheats and conspires her way through two more loveless (and childless) marriages, pretending loyalty to the reigning Yorkist monarchs while fomenting rebellion --- first against Edward IV and his wife, the beautiful commoner Elizabeth Woodville (the protagonist of Gregory's THE WHITE QUEEN and Margaret's greatest adversary), and then against his successor, Richard III. Gregory sets up Elizabeth and Margaret like queens in a chess game, and their stratagems couldn't be more fascinatingly intricate if they'd been invented out of whole cloth rather than based on the historical record. Elizabeth is blond, ravishing, rather greedy, and reputed to be a witch (in THE WHITE QUEEN she conjures male heirs and convenient storms). Margaret is dark, comely enough but no beauty, disciplined and passionately Catholic. Raging against her rival, Margaret calls Elizabeth's pride, vanity and ambition "sinful," while her own desires are "godly" and "righteous" (self-deceptive much?). She clings to her self-image as a latter-day Joan, a Machiavelli masquerading as Mother Teresa. Any reader familiar with Henry VIII knows that Margaret Beaufort went on to for
Trustpilot
Copyright © 2022 Thriftbooks.com Terms of Use | Privacy Policy | Do Not Sell or Share My Personal Information | Accessibility Statement
ThriftBooks® and the ThriftBooks® logo are registered trademarks of Thrift Books Global, LLC