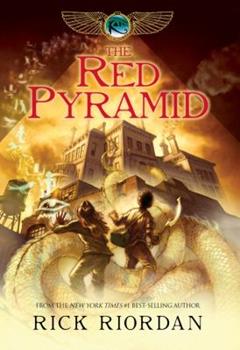 (Book #1 in the The Kane Chronicles Series)

Since their mother's death, Carter and Sadie have become near strangers. While Sadie has lived with her grandparents in London, her brother has traveled the world with their father, the brilliant Egyptologist, Dr. Julius Kane. One night, Dr. Kane brings the siblings together for a "research experiment" at the British Museum, where he hopes to set things right for his family. Instead, he unleashes the Egyptian god Set, who banishes him to oblivion...

Published by Ayesha , 6 months ago
I love this book so much and the condition was very shocking for this company. It was a little used but it was in excellent shape for its cheap price!

Came a bit dirty and damaged bit i love it

Published by Annmarie , 7 months ago
Ordered it like new, but the pages came dirty, spine mildly broken and dust jacket crumpled a bit but honestly I think it's great and definitely readable. I still love it

Fun to read after a long time

Published by MattyVally , 1 year ago
The book spine came damaged but the book was a good read! I like learning about the Egyptian gods

Published by Thriftbooks.com User , 11 years ago
This is the first book I've read by Rick Riordan and I loved it. The combination of suspense, history, and mythology is just brilliant. I'm going to have to read the Olympian series next. I'm a big fan of young adult fiction because kids are a tough audience. They won't slog through a book like an adult will just because they bought it, and so I believe that young adult novels have to be more exciting. Riordan does not disappoint. I read in Riordan's bio that he taught English and history. And now, through his books, he's teaching it again, only in a way that makes kids want to learn it. For any parent who wants their child to enjoy two subjects that are normally near the bottom of their list as far as what they have to learn, Riordan breathes new life these subjects. It's too bad that schools haven't caught on to this wonderful way of learning. We might have more engaged students. I can't wait to see what other subject Riordan decides to tackle after the Red Pyramid series. Whatever it is, I'm sure it's going to be exciting and informative. When I Dream

Published by Thriftbooks.com User , 11 years ago
"Red Pyramid" is so much fun I hope you put it on your to-be-read list. The pacing is fast, the characters are well formed, and there's lots to learn. This new series from Rick Riordan, unlike the Percy Jackson series, is told by a brother and sister -- Carter and Sadie -- who alternate chapters. The setting is an alternative earth where magic exists. In this case, the magic is based in Egyptian mythology rather than the Greek of "The Olympians" books. And Carter and Sadie have their heritage flow from the pharaohs rather than from be offspring of the gods themselves. The story begins when Carter and Sadie's dad bring them together on the eve of Christmas. Their gatherings are strange enough since Carter and Sadie only get to see each other for two days a year-- they have been raised apart since their mother's death when Sadie was 6 years-old-- but this day their dad takes them to the British museum to see the Rosetta Stone after hours. And what starts off pretty weirdly only gets seriously strange when their father blows up the Rosetta Stone and releases some gods that were perhaps better left in their prisons. It's an event which leaves them effectively parentless and starts them off on their strange journey to bring the forces of the universe back into balance. Besides the story and the Egyptian elements there are some other interesting aspects to this story. For one, Carter is black while Sadie is very light skinned. This and the fact that they are different genders allows Mr. Riordan to show us their world from different perspectives. And the author doesn't skip the chance to point out the social issues that arise from those small differences. Carter's dad, for example, has drilled into him that being a black boy/man means that he must take special care with how he dresses, while Sadie is accepted as she is, red streaked hair and all. TALKING POINTS::: Well written, Riordan includes a lot of humor in this quick paced book. It's amazing at how adept he has become in tucking facts into the flow of the narrative. There's lots here for most adults and kids to learn. Highly recommend this book for Tweeners and Middle-graders and anyone else who isn't a stuffed shirt and likes kidlit. AR level = generic "4" Pam T~ (reviewer, booksforkids-reviews)

Present for my son~I couldn't put it down!

Published by Thriftbooks.com User , 11 years ago
First off let me say, this was a present for my 10yr old son, but after "glancing" at the first few chapters I was hooked! I read the whole book in a day~it was That Good! My son was not a fan of reading until he found the P.J. Series. I read them as well, it was wonderful to discuss them with him. HE would read during the day & I would read them at night...then the next day it'd be alot of "I can't believe that!" "didn't see that coming did you?" etc For a mother of 3 boys it was very nice to have a "secret common interest". The Red Pyramid is just as good. Also, I found the writing style very intersting, and not at all hard to follow. Great book! Only problem is waiting a year for the next one

Egypt mythology as YA urban fantasy

Published by Thriftbooks.com User , 11 years ago
What impressed me most about the Percy Jackson series was how well Mr. Riordan incorporated mythology into modern settings and characters that are likable and current. I'll admit I was hesitant with this new series, Egyptian mythology is a lot harder since so much of it is supposition. He succeeded very well at doing for Egyptian mythology what he did with Greek mythology. In some ways, it's even better. His Percy Jackson books were based heavily off of myth. The Egyptian books were based on myth and archeology. There is a lot of information in this fantasy book which could very well inspire people to learn more, and it's packaged very well in an appealing story. Like his Percy Jackson books, I think this is a series my whole family will happily read and discuss.It's a hefty book (at 516 pages), but my daughter snagged it as soon as I was done. She was impressed enough with his previous work to really look forward to this one. Carter, a young man in his early teens and his sister Sadie are the main characters in this book. It starts off running and doesn't slow down as they try to solve the mystery of what happened to their parents and who they are. Carter is a very self-possessed young man who grew up with his father who traveled the world teaching and studying Egyptology. Sadie is his younger sister and she's more impulsive, she grew up with her grandparents in London in a nice stable home. She's a bit of a rebel with red streaks in her hair that contrast with her brother's button down shirts and slacks. Very nicely written characters, and the point of view goes back and forth between them and still keep the voices separate. I'm not going to write a synopsis of the story, I'm sure other reviewers will. I liked this book a lot though, and recommend it easily to people who enjoy a good non-romantic ya urban fantasy.

Scoot Over Percy Jackson, The Kanes Are HERE!

Published by Thriftbooks.com User , 11 years ago
I must say, when I read the Percy Jackson series, I instantly liked it. I enjoyed the whole Greek Pantheon of ancient gods & goddesses, magic, etc. So, naturally, I wanted to read "The Red Pyramid" to see if it had the same magic. I can happily say that it does and then some. I would even volunteer that I liked "The Red Pyramid" even more than the Percy Jackson books for several reasons. First, in "The Red Pyramid", we're introduced to two amazing lead characters who both share in the story's narration. Carter Kane, age 14, is an African American teen who has lived with his father, Julius, his entire life...due to what is described as an ugly custody battle between Julius and his former in-laws (Julius' wife, mother to both Carter and Sadie Kane, died when the children were quite young). Sadie Kane, age 12, looks caucasian (taking after their mother) with light skin, blue eyes, and hair she likes to put colored streaks throughout. Because of the custody agreement, Sadie lives in London year-round with her grandparents - seeing her brother and father only two times per year, which has resulted in the siblings being more like distant relatives to each other. Julius is an archeologist, traveling around the world studying ancient Egyptian artifacts and bringing his son Carter along with him wherever he goes. Carter, because of his father's teachings, is an awkward 14 year old boy, a bit hesitant and unsure of himself. Sadie, on the other hand, despite being two years younger than Carter, is quite a bit more bold, quick to speak her mind and very sure of herself and her opinions. I must say, I loved both Carter and Sadie Kane...for their differences as well as how they grow together as siblings! I cannot reveal much more than this without revealing too much of the book...but I think you'll know what I mean when you read "The Red Pyramid". Another reason I enjoyed this book is because of the depth of information given to the reader. It's obvious that Riordan, in his research, learned quite a bit about the ancient Egyptian ways as well as the intricate nature of their belief system....and he definitely gets that information out to the reader in a very exciting and entertaining way. Magic and mythology come together in a fascinating and fast-paced way in this book. Instantly, the action starts and you'll be pulled into the book. Humor plays a big role in this book as well (especially from Sadie), which just adds to the entertainment. All in all, I'd highly recommend "The Red Pyramid". If you're a fan of the Percy Jackson series, I'm sure you'll like it. Or, perhaps you'll be like me and like it even more! :)
Copyright © 2020 Thriftbooks.com Terms of Use | Privacy Policy | Do Not Sell My Personal Information | Accessibility Statement
ThriftBooks® and the ThriftBooks® logo are registered trademarks of Thrift Books Global, LLC