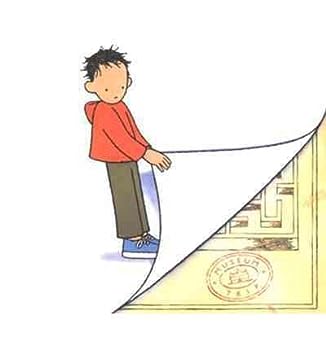 This Caldecott Honor-winning book about a book is a delightful, wordless tale about the power of stories, perfect for fans of Brendan Wenzel and David Weisner. A red book is lying in the snow in the... This description may be from another edition of this product.

An unusual treat for the imagination.

Published by Thriftbooks.com User , 16 years ago
We happened to find this little book in our school library. My preschool-aged son selected it solely based on the inviting bright red color of it's cover. We were surprized to find it to be a book of no words... only those we chose to give it. It is beautifully and creatively drawn. A treat for those who dream of adventure and are willing to find it in imagination.

Published by Thriftbooks.com User , 17 years ago
This book-within-a-book has the power of Shakespeare's fantasy sequences, the mischief of Twain, and the clever trickery of Lewis Carroll. "The Red Book" is open to multiple interpretations, even by the same reader! It's all beguiling illustrations, but they're drawn so seamlessly that they suggest the magical story about two children drawn increasingly closer to each other. I say "suggest" because this is a highly interactive book: Your experiences and those of your child will inform the shape and tone of Lehman's deft presentation. The Plot and the Parallels: A big city schoolgirl uncovers a red book almost hidden by the snow. As she reads the book she finds a map of an island, and the book's pictures get progressively closer to the island. Finally, the girl turns to a page in which she sees a boy on the beach of this island; the boy is holding a red book which leads him closer and closer to a picture of the big city schoolgirl in her apartment. They apparently have found the same red book, or two red books with the same storyline but different points of view. This red book, as it is read, leads each child to pictures of the other child reading the book! In one particularly astonishing illustration, we see the girl looking out her window with wonder, while her open book reveals the boy (with a similar expression) with his open book showing the picture of the same girl we see looking out of her window! Film buffs may associate this dualism with "Strangers on a Train," or "Blow-Up," whereas literature has parallels (pun intended) in "Lolita" and "Dr. Jekyll and Mr. Hyde." While these works have an association with evil or moral ambiguity, "The Red Book" reassuringly shows that when the girl and boy see each other they smile; they're definitely glad to see each other. Wanting to visit the boy in her book, the girl buys big, brightly colored helium balloons and flies (again, with a smile) over the city and towards the ocean. As she takes off, she accidentally drops the red book on a grey-bricked wharf. (The contrasting patterns and textures of reddish and grey rectangular books, round balloons in the distance, lapping waves of blue-green ocean, and light snow falling against a grey and white sky is inspired). Through the open pages of this dropped book, we view the boy on the island. As the pages turn (or, is it one illustrated page that acts like a window into the island?) we see that the boy sees (while reading more of HIS red book) that the girl is flying, holding onto her balloons. As she flies out of the red book's picture, he becomes sad and looks away from the book. However, the reader of Barbara Lehman's "The Red Book" can still follow the adventure through the book on the wharf. The girl lands safely, and she and the boy happily meet each other. Finally, we see one of the girl's classmates (you wouldn't know who he is without looking back at one of the earlier pages) picking up the red book that the girl dropped onto the wh

How many Red Books are there?

Published by Thriftbooks.com User , 17 years ago
This is the kind of book that you find yourself thinking about long after you have returned it to the shelf. I "read" it a few weeks ago for the first time (there are no words, so I guess I just took a picture walk, as they say), and I still have very vivid memories of the story. The pictures are great, and the implied plot is engaging. The best thing, though, is all of the possible interpretations, and all of the questions. Does the book in your hand interact with the red book held by the girl and the boy? Or is it the same book? Where does the book go? Does the boy live on the island? Are they friends now? This would be a fun way to get kids to look for meaning without getting hung up on words. I highly recommend it for anyone, at any level. It is exciting and innovative.

The only little red book you'll ever need

Published by Thriftbooks.com User , 17 years ago
It's official. The results are in. The year 2004 can now officially be declared the "Best Year of Wordless Picture Books" on record. This little appreciated genre of fiction has rarely ever been given its due. Yet now we can enjoy such marvelous stories as "The Boy, the Bear, the Baron, the Bard" by Gregory Rogers and "Home" by Jeannie Baker. And then, to top it all off, is the frosting on the cake. "The Red Book" by Barbara Lehman, which stretches the boundaries of picture books everywhere and spices up its story with a distinctly post-modern edge. Some author/illustrators might find it exceedingly difficult to write a picture book, within a book, within a book, without adding so much as a gasp or sigh to dot the text. Not Lehman. The result is this marvelous Caldecott Honor winner that deserves your full undivided attention. The story is a misleadingly simple one. A girl walking through a gray winter cityscape finds the corner of a bright red book peeking out of a snowbank by the sidewalk. She rescues the item and takes it with him to school. A quick perusal of it shows that it is a story about a warm sunny island, where a boy walking along the sand also finds a red book, this time peeking out of a sandbank. As the boy on the beach reads it he sees that is a story about a city... in which a girl in her classroom is reading about him. The two kids realize what is happening and are intrigued. So what is the natural solution to this problem? The city girl leaves school for the day and buys as many colorful balloons as she can from a local street vendor. The balloons carry her up... up... up above the industrial uniformity below, causing her to accidentally drop the book. It lands on a sidewalk where we see the island boy sitting on the sand waiting. As the wind flips the pages of the book the island boy sees the city girl coming in for a landing and they joyfully meet up with one another. Then the red book closes and someone else picks it up and rides away on his bicycle. Undoubtedly to participate in a whole new adventure. Did you get all that? It's a little difficult to summarize this tale if only because Lehman, as an author/illustrator, is so doggone adept. And though it sounds complex, I assure you that almost every five-year-old you show it to will grasp the concept immediately. This is the kind of story that teaches them all about breaking down the fourth wall... in a preschool kinda way. Entirely aside from the concept, however, are Lehman's great pictures. It's funny, but until now Lehman hasn't illustrated or written anything particularly well-known. Her style is like that of a sophisticated Amy Schwartz (of "What James Likes Best" fame), with simple characters and distinct lines. But where Schwartz relies on simplicity to the point of wide open spaces, Lehman has filled this particular book with beautiful geometric lines and angles. The city girl's classroom is all angles and kids in straight rows. And

Destined to become a classic!

Published by Thriftbooks.com User , 18 years ago
I love this little book. Personally, I think it's one of the best picture books to come along in ages! A girl finds a red book in a snowdrift. Inside are pictures of a boy on a tropical island. The boy is also reading a red book. Curious. His red picture book shows a girl in the city who is reading a book about a boy on an island... hey, woah! Lehman's illustrations beautifully convey the unique twist of this magical story/brain teaser for the very young (and not so very young.) The story is an inspiring message about the power of books transcending time and space to bring people together. For me, the best part about The Red Book is that it's a book within a book. The reader is not simply an observer, but a participant of sorts (since they're reading The Red Book too!) I predict The Red Book becomes a classic.
Trustpilot
Copyright © 2022 Thriftbooks.com Terms of Use | Privacy Policy | Do Not Sell My Personal Information | Cookie Preferences | Accessibility Statement
ThriftBooks® and the ThriftBooks® logo are registered trademarks of Thrift Books Global, LLC