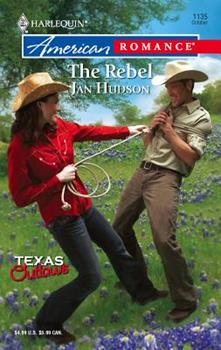 (Part of the Texas Outlaws Series)

The only girl in a large family dedicated to law enforcement, Belle Starr Outlaw has quit her job as an FBI agent and divorced her cheating husband. Starting over, and too independent to be taken care of by her mom and dad, she lands in Wimberley, central Texas, to regroup. This small town is wonderful, and Belle is enamored of the people--especially Gabe Burrell. Gabe's obviously a successful man--and a family man, seeing how protective he is of...

LOOKING FOR MORE THAN WHAT I GOT - #4 of the Outlaws

Published by Thriftbooks.com User , 14 years ago
I was looking for big dramatic reason for all the home security. The reason was good but no imminent danger. Belle Starr Outlaw was escaping her divorce from her husband who had taken up with his former sweetheart and had gotten her pregnant. A snow storm and fever got her stranded and she called her brother, Sam to come get her. He, of course, came with his good friend, Gabe Burrell who just happened to have a helicopter. Sam and Gabe stayed at her bedside until she was out of danger. Loved her delirious comment, "Blow, Gabriel, Blow" as she thought she was headed for heaven. She totally fell in love with all of Gabe's entourage, Flora Walker, his mother, Skye Walker, his sister, Suki and her husband Ralph. Flora would scream at the sight of a scorpion. Skye traveled everywhere with Gus, a german sheperd who was her buddy and protector. Then there was Carlotta, the llama, who could ring doorbells. Belle was trying to stay away from her family, who would coddle her and not leave her in peace. Ah, well here we go again. Leaving the FBI she now needed to find a living job. She sure didn't know what she wanted. She wanted Gabe, yet she didn't but that didn't stop her from finally giving in. About that time I gave up on her. Story was good - wonderful characters - easy moving plot - no action - Sam's story coming up next May. Will Recommend as an easy read - loved the cover

Published by Thriftbooks.com User , 15 years ago
On her way home after quitting the FBI and divorcing her cheating spouse Matt, Belle Starr Outlaw takes sick near the New Mexico-Texas border. She stops at a motel where she calls her brother Sam telling him to come get her as she is dying. Sam and his friend Gabe Burrell arrive to find Belle very ill. They take her to the nearest hospital where she is diagnosed with pneumonia. Upon release from the hospital, Belle needs a place to finish healing, but does not want her parents hovering over her. Gabe takes her to his home in Wimberley where his mother and sister reside as chaperones. As she considers her future while recuperating from her illness, she finds herself falling in love with Gabe, but though he feels the same way, both remain wary as he like her just got a divorce. THE REBEL is a congenial contemporary small-town romance starring two nice protagonists and a diverse somewhat eccentric support cast. The "conflict" between Gabe and Belle is caused by both having just recently become victims of the divorce wars so that both are wary to go for anything beyond the immediate moment. Fans of gentle modern day Texas romances will want to read Jan Hudson's warm second chance at love. Harriet Klausner

The Outlaws are back!

Published by Thriftbooks.com User , 15 years ago
The Outlaws are back! And that's great news! In this terrific fourth book about the Outlaw family--every one of whom is named for an infamous lawbreaker--we meet the only female, Belle Starr Outlaw. Other than her family, there's very little good in Belle's life. Trained to serve the law like the rest of her family whom we met in The Judge, The Sheriff and RITA-nominated The Cop, Belle became an FBI agent. She also married and moved to Colorado. There she discovers she isn't cut out to be in law enforcement and that her husband is a low-down skunk who's taken up with his former girl friend. She high-tails it out of Colorado and heads toward the family home in Naconiche, TX. Unfortunately, she gets very sick as she enters Texas. Gabe Burrell rescues her and takes her to his family home to recuperate from pneumonia. Ms. Hudson introduces us to a wonderful cast of characters in Gabe's hometown of Wimberley, Texas, a charming and very real location in the hill county. We meet Flora, Gabe's talented but fragile mother; his sister Skye, a veterinarian with a past that still haunts her; and the townspeople who are delightful. All of these--plus a llama who knows how to ring the doorbell--help Belle to discover, after many humorous missteps, what she is supposed to do with her life. While attempting to sort her future out, she tries to sidestep her attraction to Gabe. Just as well. Gabe is wary of love. His fiancé broke up with him because he's chosen to care for his mother and sister who can't make it on their own. Can Belle, who has no reason to trust men, accept Gabe and his responsibilities? As always, RITA-winner Jan Hudson handles Belle's story with skill, love and a dash of laughter. She brings out the emotional depths of these characters and makes us care as Gabe and Belle struggle with family and trust to find a happy ending. The Rebel is a beautifully written novel which will involve you deeply and make you feel like one of the family.
Copyright © 2020 Thriftbooks.com Terms of Use | Privacy Policy | Do Not Sell My Personal Information | Accessibility Statement
ThriftBooks® and the ThriftBooks® logo are registered trademarks of Thrift Books Global, LLC