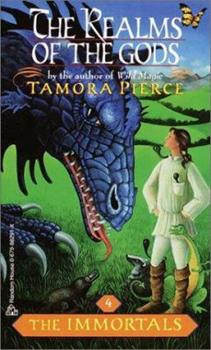 The Realms of the Gods (The Immortals #4)

(Part of the Tortall Series and The Immortals (#4) Series)

Daine and Numair are suddenly swept into the otherworldly home of the gods after facing certain death on earth. But they cannot remain there for long, because they are both needed to help fight the desparate battle raging in Tortall. And so they undertake the dangerous journey back to earth...a journey that will teach them a great deal about life and about each other, a journey that will lead to the startling culmination of the conflicts, both mortal...

"Mortal Spirits were Poorer with the Immortals Gone..."

Published by Thriftbooks.com User , 17 years ago
"Realms of the Gods" is the final book in Tamora Pierce's "Immortals" quartet, and probably the best. As one can possibly guess, it's nearly impossible for someone to begin reading this series at this book - you at *least* have to read Book Three: "The Emperor Mage", though ideally you should have all three previous books under your belt: "Wild Magic" and "Wolf-Speaker" just to have the complete picture of what's going on here.And what's going on is that our sixteen year old heroine and her mentor Numair are constantly on the move as they do their part for the kingdom against the hoards of immortal monsters spilling over the now-destroyed barrier between the mortal and divine realms and are marching against Tortall. Daine is sure that behind all of this is the ex-Emperor Ozorne, whom she toppled from his throne the previous year and is now out for revenge.But there is another force also working against them, and indeed against the very gods themselves: Uusoae, the Goddess of Chaos who is using her newfound alliance with Ozorne to wage war against all the realms. It is in the middle of this tempest that Daine finds herself, but when she and Numair are nearly killed, the gods themselves intervene. Here finally, Daine learns the truth about her parentage, and the identity of her long-absent father.But as happy as she is to be with her mother and father once more, she and Numair are very aware of the plight of their friends back home, and their importance in the coming battle. But the only way to return to the mortal realms is to beseech the help of the dragons, and to get there the two must take a dangerous journey across the Realms of the Gods...Tamora Pierce really outdoes herself in this final installment, and though many may disagree, I feel that this is her best book to date, melding together a range of themes and ideas, with the cosmic battle of the gods contrasted against the human Battle of Port Legann; Daine's parental fear toward Kit the dragonet against the blossoming romance she feels for her long-time friend and mentor. Moments that feel utterly epic are matched against the everyday necessities of life, and throughout it all Daine remains an immensely likeable heroine: trustworthy, courageous, loving, kind and intelligent.For those who have followed Daine's journey throughout the four books, this should be an immensely satisfying conclusion, filled with familiar faces: Tkaa, Kit, the badger, Jonathon and Thayet, and several new and equally fascinating ones: Gainel, the silent god of dreams (who gives Daine some fascinating dreams), Broad Foot, the god of the duck-moles and Weiryn, Daine's very own father. Most importantly for me though was the Stormwing Rikash, whose inclusion in the story completes Daine's self-growth: from a young woman who blindly hated and destroyed that particular race, to a woman who comes to consider one a friend. It is a particularly sublime bit of character development.In fact, if there is one thing wrong with

REVIEW OF THE SERIES

Published by Thriftbooks.com User , 19 years ago
Recently, my friend introduced me to the author Tamora Pierce. She is the author of several series, one being the topic of my writing today, The Immortal Series. This fantasy series was published by Random House Fantasy in 1992. It consists of four books: Wild Magic, Wolf Speaker, Emperor Mage, and The Realm of the Gods. The books are all approximately three or four hundred pages each. The first book, Wild Magic, begins the magical journey that both the reader and the protagonist will take. The main character is a young girl named Daine. She is homeless as well as an outcast in society. At the tender age of thirteen, she is without a mother, doesn't know who her father is, and has no relatives to take her in. Her only companion is her horse, Cloud. She has an unusual ability to get a long with animals, they hear her, obey her, and some can even talk with her. Daine gets word of a job and goes to offer her services. The woman she begins to work for, Onua, is a horse handler who helps Daine realize the potential of her knack with animals. Her boss who also becomes her friend introduces her to many important people. They help her learn that her potential is enormous and take her under their wings. She finds that her skill is a form of the "gift" or a type of magic, although hers is wild magic. With the help of a powerful mage named Numair, she learns to use her magic to heal animals as well as make some interesting discoveries. Daine is able to sense immortals like Stormwings, creatures that have feathers made of knife sharp metal and live off the dead. We learn the reason for Daine being an outcast and how she once lived wild as a wolf. Daine uses this and her friendship with the animals, known in the book as the "People," to save her kingdom from invasion. Daine is constantly given help from her guarduan, a badger, who was sent by her unrevealed father. She aquires a dragon named Kitten when its mother dies in battle. Kitten along with Cloud are her constant companions. This type of magical theme is carried throughout the rest of the series. The plot continues to hold many adventures. The setting is in a place where magic and sorcery are accepted, common and a way of life. The characters all have interesting talents as well as life stories. In the second book, Wolf Speaker, We meet the pack of wolves Daine once belonged to. They helped the now 14-year-old Daine avenge her family's death. The wolves are in need of Daine's help in Dunlath Valley where their home is being destroyed. Daine and her tutor, Numair, travel to the valley where they find the destroyed terrain and a plot to overthrow the king. Once again, it's Daine's "wild magic'' that allows them to destroy a magical shield created by evil mages over the valley. We are given a few hints as to who her father may be.Daine learns that not only can she talk with animals but she is able to morph. Again, Daine aquires new friends, this time an immortal named Tkaa, a basilisk (a creatur

A Great Ending to a Great Series!

Published by Thriftbooks.com User , 21 years ago
Alright, I don't think I have ever been more depressed in my whole life that I have finished a series of books than I am right now. This has been the best 3 days of my life. I could not put any of the books down. I would have to say this one was my favorite because Numair and Daine go together. I knew it was coming. Numair had fallen in love with her long before this book, but he was just to stupid to realize it till he almost lost her. Ahhhhh... memories. Seriously though, this series is fantastic for girls and guys. It is amazing, I can't even describe it. I can't saying anything or else I will end up underrating it, it is that good. If you haven't read this series you had better go out and buy it NOW! If you don't you are missing out. You can't read books without reading these. What a wonderful series! I loved every second I spent reading it. Everybook was great in its own way. I LOVE THE IMMORTALS!

On behalf of all us hypnotised readers...

Published by Thriftbooks.com User , 21 years ago
To Ms. Pierce, from a reader who has read almost every one of your books (I still haven't been able to get my hands on the second Song of the Lioness book), I'd just like to say this: HOW CAN YOU DO THIS TO US! There is no thing more cruel in the world, than to end not a book, but a SERIES, just after someone proposes. We don't even know if Daine said yes or not! Although, the chemistry between Daine and Numair really was evident (especially in Emperor Mage), and I'm surprised that there were actually people who were surprised when they got together. Come on! How do you not see it? And I don't care what anybody else says. This book was wonderful (even though it left us hanging), and I'm always right, so don't even try to argue.

The Greatest in the entire world!!!

Published by Thriftbooks.com User , 22 years ago
This book was most definately the greatest in the entire world. What else could you say about it? The scenery seemed very real to me and I liked how Daine finally got to meet her dad. That was sooo sweet!! My only complaint? Her mother Sarra. Did anyone else get the impression of whiney, overprotective, overbearing, cant take care of herself, Mommy? I most certainly did. I was glad when they left there. It gave Daine and Numair a chance to be alone. They are so good together. And(this should make all you complainers feel better) in the new Tortall series that Tamora's writing, we find out just a little more about them. I haven't read it yet but I have high hopes. Why not? But I'm wondering about something. How in Mithros's name did they tell everyone? I sit awake at night wondering about that. I have a wide picture of Varice Kingsford feinting, Baron George grinning, and Onua and Alanna saying," Really? Are you quite sure?" I thought this book was the best in the Immortals series, and I'm hoping that we hear at least a little more about Daine and Numair in the future.
Copyright © 2020 Thriftbooks.com Terms of Use | Privacy Policy | Do Not Sell My Personal Information | Accessibility Statement
ThriftBooks® and the ThriftBooks® logo are registered trademarks of Thrift Books Global, LLC