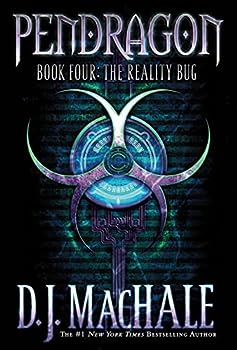 (Book #4 in the Pendragon Series)

This description may be from another edition of this product. VIRTUAL REALITY? The territory of Veelox has achieved perfect harmony. Fifteen-year-old Bobby Pendragon arrives on this territory in pursuit of the evil Saint Dane, but all is peaceful on Veelox --...

Published by Thriftbooks.com User , 12 years ago
Purchased for grandsons. Read first and found ok so let grandsons read. Good for ages 10 and 12. A little too much magic, but ok.

Published by Thriftbooks.com User , 14 years ago
This book seemed just a tad bit dreary as far as the world goes but nonetheless it was a totally great read!

Published by Thriftbooks.com User , 17 years ago
Okay, I've heard of good books, but this one blew my socks off. Bobby Pendragon is a Traveler. He goes to a place called Veelox, which is completely deserted. Everyone is in virtual reality. The residents don't even know it, but their world is crumbling as they enjoy virtual reality! Bobby has to stop this. Awesome book, awesome plot awesome characters. YOU WILL LOVE IT!

Published by Thriftbooks.com User , 17 years ago
The Reality Bug is an awsome book! I loved it and stayed up hours of the night reading anxious to see what happens next. The characters are so well developed. The plot and story line are exiting and kept me glued to the book hungry for more! I can't wait to the next book in the series comes out!

Published by Thriftbooks.com User , 17 years ago
Pendragon Reality BugDJ MacHaleReviewed by N De SilvaP3Pendragon has again traveled through space and tine to a place called Veelox to duel against the evil St. Dane. Veelox is an abandoned place where people escape reality by jumping into a type of virtual reality where anything you want, it is given to you. In Veelox, Pendragon meets another Traveler by the name of Aja. Aja is one of the head supervisors of the reality system. It seems like St. Dane is trying to destroy the world by killing all the people with the virtual reality system because many people are dying. Aja knew that this was coming so she made a kind of virus called the Reality Bug. What it does is instead of pleasing the people in the reality zone, it gives them the opposite and denies what ever they want. Somehow the reality bug takes over and infects the whole system. Now Bobby must venture to where the creator of the virtual reality system and get a code that will destroy the bug. The only problem is that he to is in the virtual system. So Pendragon gets his friend Loor and they enter the virtual place. This was a really good book and I have read it many times. It is action packed and a really good page turner. I couldn't put it down. It is very good for people who like science fiction/action. People should also try the first three books: 1.The Merchant of Death. 2. The Lost City of Farr. 3. The Never War. I can't wait for the next book to come out.
Copyright © 2020 Thriftbooks.com Terms of Use | Privacy Policy | Do Not Sell My Personal Information | Accessibility Statement
ThriftBooks® and the ThriftBooks® logo are registered trademarks of Thrift Books Global, LLC