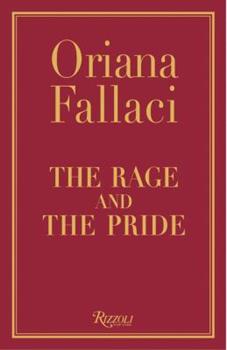 The Rage and the Pride

The Italian-born journalist offers her reactions to the events of September 11, 2001, and her views on America, Italy, Europe, Islam and Western civilization, and related topics, interspersed with personal memories.

Published by Thriftbooks.com User , 15 years ago
Sometimes, and how I wish it were more often done, it is necessary to scream at craziness. When people die because others court and appease fascists, is it wrong to wail at the insanity? Ms. Fallaci even with her roughness and vulgarities, is a women with class, and not the pseudo-culturalist sort, those whom, through her knowledge of history and politics, she so neatly puts "in their places". Capitally she lifts the pretentious fog of the self-righteous yet guilt-ridden West because she got it right. She got right that everybody deserves freedom with justice as its guard, that there is a contrast between the elaborate art, Greek thought and high literature of the West compared to the dross of Islamic nonculture. That women's rights are zero in Islamism, and that feminists of the West could care less. There isn't much that is sane about passive political correctness, this strange idea of tolerance for a religion that invites subjugation and a terrorizing conformity. Islamic-fascists want our territory, and our souls and Oriana wants us to refuse to give away either or to be duped by abetters. If you think this is reactionary, maybe you also think the war in Iraq is an illusion. I'll have my little "drink" and I'll be more sober than the calculated coolness of Islamic demolitionists. Our stickers promised that "9-11, we'll never forget". Some of us have forgotten.

Published by Thriftbooks.com User , 17 years ago
This passionate polemic by Oriana Fallaci grew out of an article she wrote for an Italian newspaper after the events of 9/11. She afterwards expanded the piece in order to say everything she wanted to get off her chest. In her own words, she was trying to open the eyes of those who do not want to see, unplug the ears of those who do not want to hear and ignite the thoughts of those who refuse to think. In her introductory dedication, Fallaci explains that the English text is her own translation and there may be oddities in the style and vocabulary, but that she wanted it to be like that because she wishes to retain complete responsibility for every word, period and comma in this book. I found her language quite charming, an Italianate version of English brimming with rage and anger. In the Preface, she talks about inter alia New York as a place of refuge for Italian expatriates, her family background, the struggle against fascism, the process of writing the newspaper article that eventually evolved into this book, and much more besides. The main text starts out with her feelings right after she saw the attack on the Twin Towers on TV and what followed. She also discusses the various reactions from around the globe, the heroism of the fire-fighters and America's unity in the face of adversity. Fallaci really lays into the politically correct, the followers of multiculturalism and the apologists for terrorism. While not blind to the faults of the West, she vigorously defends Western culture, even Christianity, although she claims to be an atheist. Talking extensively about her travels in the Middle East, Fallaci relates a humorous incident about the time she interviewed the Ayatollah Khomeini in Iran, and a sad encounter with Ali Bhutto, a former Pakistani prime minister. Her outrage at the destruction of the Bamiyan Buddha statues in Afghanistan is palpable. She also gives a moving account of her meeting with the Dalai Lama in Dharamsala in 1968. Fallaci doesn't mince words as she talks about the growing numbers of culturally non-integrated minorities in her native Italy and the problems arising from that situation. It would appear that she despairs for the future of Europe, lashing out at certain European leaders and the political elites. She calls the EU the suicide of Europe. I think The Rage And The Pride must be the most politically incorrect book that I have ever read. It is brutally honest, emotional and perhaps a bit over the top in one or two places where it might make some readers' hair stand on end. But it is a rivetting read, one very special woman's testament to the dangers facing the West, and an eloquent defence of our culture. Those who appreciate this book may also appreciate Eurabia by Bat Ye'or, Unholy Alliance by David Horowitz, The New Anti-Semitism by Phyllis Chesler, Castle Of Lies by Christopher Booker, Terror by Fiamma Nirenstein and Fallaci's latest, The Force Of Reason.

When are Non-Muslims going to wake up???

Published by Thriftbooks.com User , 19 years ago
Bravo! As a non-Muslim living among Muslims I'll say the author has done a fantastic job. I am indebted to people like her, Bat Ye'or, Daniel Pipes, Paul Fregosi for daring to go against the current of political correctness....not to mention risking one's life for painting a negative picture of this certain religion which ironically means "Peace". When was the last time you heard Christian, Jewish, Buddhist, Hindu or Bahai "martyrs" hijacking planes and blowing themselves up in embassies, buses, ships and discos? When was the last time you heard Protestant ministers, Catholic priests, Buddhist monks etc issuing a fatwa calling for death against unbelievers, apostates, adulteress and blasphemers? If terrorist attacks are committed by a an extremist minority within Islam, then what have the Christian, Jewish extremists been doing? If it is true that it was "Islam which was hijacked" on 9/11, then why aren't the Muslim clerics issuing fatwas calling for the death of Osama bin Laden and his allies who planned the hijack ....not to mention the tens of thousands who danced on the streets in Muslims countries after Islam was hijacked?The problem with most Westeners are their political correctness and their feeling of guilt towards the past colonisation of countries inhabited by non-Whites including Muslim countries so much so that any criticism against Muslims (no matter how true it is) is considered by themselves as racism. This results in Muslims getting special/preferential treatment over the Western Christian/secular/Jewish majority in a Western country. Although it is so obvious that the religion of the Muslims is the only one which teaches that Jihad (i.e. war against unbelievers) is a must for every able bodied Muslim man, PBS has made a film about Prophet Muhammad (and narrated by Karen Armstrong) with U.S. tax payers money and aired over American TV claiming how wonderful and merciful he is. How long are the Westerners going to put up with this?After all the books from Karen Armstrong, John Esposito, Prof Michael Sells and other Islamic apologists, it is trully refreshing to read a "truthful" book from a non-politically correct Westerner for once.

Published by Thriftbooks.com User , 19 years ago
Oriana Fallaci is honest. That's the best part of her new sermon. She is not a woman who will pull punches, who will temper her passion to appease those who might get offended. It's so refreshing, so inspiring to read an educated European woman decry some of her own continental brethren. This brethren include the intellectuals and "leaders" who always drop those wonderful hints that America was really to blame for September 11th. That we're such a big bully, that we're so dangerous and evil. Fallaci reacts with the zeal of a wounded American, betrayed by European lack of comprehension. She compares Europe's ostrich complex to America's during the rise of fascism. They don't understand the war being fought, that the enemy is within and will do anything to destroy the native culture. That is the nature of the beast she points out, and she doesn't shy away from naming names and pointing fingers.The enemy to Fallaci and the rest of the civilized world is Islamic Fundamentalism. The reason why this book is such a good read is she puts the threat in human terms. Throwing away the classic retort "Well, it's just a small minority," Fallaci describes the things she sees. She sees millions, millions of people chanting Death to America. Whole governments, controlled by degenerate autocrats fear this mass of illiterate Nazis. That's what they are, Nazis. Even worse, religious Nazi's, filled with a love of death and hatred of life. They have no ability to better themselves or others, so they kill and teach hate. It's a petty existence, and a dangerous one. That's the message Fallaci gets across with startling vigor. She states that the war is not over, and will get worse. This is a very enlightened few, not pessimistic, realistic. The masses of blackshirts with little books are no different than histories great tyrants and murderers, their rage has to end with death or failure.Of course, Fallaci's writings caused an uproar all across Europe. The biggest critics, various imams of Europe,(many of whom have been implicated or jailed for terrorist activities) celebrated 9-11 and push the tenets of religious death to their followers. This is in Europe, the cradle of the West. Then come the death threats, the personal attacks, the celebrations on hearing of Fallaci's terminal cancer. What else do they have to celebrate, their culture is dead and only anger brings release or parity. That's the message Fallaci is going to get across even if someone carries out one of the "religiously" sanctioned death edicts.A brave lady and a wonderful writer. Good luck to her.

Published by Thriftbooks.com User , 19 years ago
This is a very personal reaction to the bombing of the World Trade Towers by a gifted Italian journalist who has been to all the war zones from Vietnam to Lebanon, and has also interviewed some of the major players in the Islamist terror war against the west. It is extremely outspoken - refreshing and thought provoking. Not for the politically correct.
Trustpilot
Copyright © 2022 Thriftbooks.com Terms of Use | Privacy Policy | Do Not Sell or Share My Personal Information | Accessibility Statement
ThriftBooks® and the ThriftBooks® logo are registered trademarks of Thrift Books Global, LLC