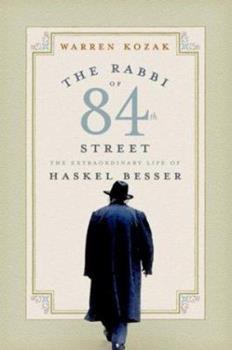 The Rabbi of 84th Street: The Extraordinary Life of Haskel Besser

A Hasidic rabbi on Manhattan's Upper West Side, Rabbi Haskel Besser is a powerful and unique presence: a deeply religious man who is at home in the secular world. With an easy smile, Rabbi Besser spreads joy wherever he goes, enriching the lives of his many friends and congregants with his profound understanding of both Orthodox Judaism and human nature. Journalist Warren Kozak befriended Rabbi Besserin 1988 and writes with warmth and admiration about...

Published by Thriftbooks.com User , 14 years ago
"The Rabbi of 84th Street - the Extraordinary Life of Haskel Besser," by Warren Kozak is a remarkable little biography of a remarkable man of faith and action. Mr. Kozak, a journalist by profession, writes a moving portrait of Rabbi Besser, now "an elderly Hasidic rabbi." Kozak, Jewish, but not Orthodox, is well-positioned to write this biography, explaining the history, beliefs and lifestyle of Rabbi Besser and the tight-knit Jewish community in Poland and the rest of Europe as Hitler moved to completely erase them from the planet. A rabbi acquaintance of mine gave me the book as a Hanukkah gift. With a large pile of reading material always beckoning, I was reluctant to begin reading the biography, thinking that the story of an old Polish rabbi would hold little interest to a young American Christian - I could not have been more wrong. First of all, Kozak knows how to tell a story. Secondly, Rabbi Besser's life is at the center of some of the most momentous events of the 20th Century: WWII and Hitler, the creation of the state of Israel, and the Cold War. Finally, Rabbi Besser's faith is a powerful testament, speaking volumes of his character and of the nature of the G-d we both worship in our own way. So many of the events in Rabbi Besser's life are worth recounting; I'll mention two: his narrow escape from Europe on the day Hitler invaded Poland; and his amazing partnership with Ambassador Ronald Lauder. Kozak spends about 20 pages to set up Rabbi Besser's childhood in Poland, detailing his home life and the history of his faith, then comprising a full ten percent of Poland's population. Seeing Hitler for what he was, Besser's father liquidated some of the family business on the eve of WWII and set about to safeguard his family by moving them to British Palestine. Young Besser, then 16, was left to tie up loose ends, a job the senior Besser had full confidence he could handle. Barely getting on a Romania-bound train in Warsaw two days before the invasion, Besser headed southeast. On board, he was almost attacked by a group of mobilizing Polish soldiers until a priest intervened - the priest was earlier impressed by Besser's regard for life when he asked him about a bomb in Haifa that killed innocent Arabs. The train made it to Lwow, 100 miles short of the border with Romania, when all train service was suspended because of the "imminent war situation." Told to leave the train, which was traveling an international route, Besser did so, then quietly boarded. He was likely the only passenger on the train as it traveled for another three hours to the border. At the international boundary, Besser was almost ejected from the train by a Polish border guard who threatened to shoot him as a deserter. As the guard left to get the police, the train lurched forward a hundred yards - into Romania. Possessing a valid Romanian visa, the Romanian guards demanded a bribe; one U.S. dollar did the trick. Finally, on September 1, 1939, th

OY! It ain't easy being Hasid....but well worth the time

Published by Thriftbooks.com User , 15 years ago
Warren Kozak has written the semi-biography of a man who is the proof that to every exception there is a cliche. Instead of the stern, austere, cold and inscrutable hasidic rabbis, Rabbi Besser comes off as a warm caring and very worldly (and involved) modern man. He is self-educated in many things and unlike most people, has an open ear for all opinions (even those he disagrees with). He is the quintesential MENSCH in that he both knowledgeable and humble about who he is and what he knows. He doesn't try to run over you with his knowledge but lets it creep up on you. Kozak makes a major point when he talks about the Rabbi's ability to LISTEN, which is so under hyped in the 21st century where the attitude is: I am an expert in " " therefore you should listen to my opinion or your an idiot. For those who (like me) grew up with European Grandparents (mine were Viennese Jews), there is an understated remembrance of people who were thoughtful about what they said and were willing to listen to the truth behind a arguement before making up their minds. There was also a stoicism that things are the way they are and you just have to learn to live with them, things could always be worse. Rabbi Besser has made a difference in many lives because he set out to live his own as a testament to all those who came before him (and perished in spasm of hatred that is still unintelligible to most of us). G-d bless him and grant him another hundred years.

Published by Thriftbooks.com User , 18 years ago
This book provides a bit of insight into the story of Rabbi Besser. The author is successful in writing a biography of a great man without fanfare or noise. The story of Rabbi Besser's life is an inspiration to all of us. It demonstrates the power of faith, prayer and a life spent doing good deeds -- without the need for continuous recognition. Rabbi Besser sets an example just by being himself. Perhaps best summed up as doing the right thing. An excellent read.

Inspiration for the Modern World

Published by Thriftbooks.com User , 18 years ago
This man is both rooted in tradition, from ancient sources, but lives now and for today. Life is about gaining wisdom, and we can all learn from Rabbi Besser how to do just that.

Published by Thriftbooks.com User , 18 years ago
If I had to choose one book to take with me on a trip, this would be it. The style is written simply because the subject matter is so fascinating and speaks for itself. I have been privileged to meet the Rabbi and this book is just the tip of the iceberg. The sequel to this book should perhaps be written in encyclopedia form as there is so much more that can be written about Rabbi Besser's experiences. Wishing his entire family and him much luck.
Trustpilot
Copyright © 2022 Thriftbooks.com Terms of Use | Privacy Policy | Do Not Sell or Share My Personal Information | Accessibility Statement
ThriftBooks® and the ThriftBooks® logo are registered trademarks of Thrift Books Global, LLC